Even the most independent-minded among us must sometimes seek help from others. 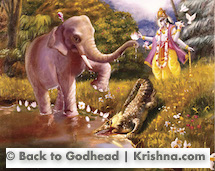 Gajendra, the king of elephants, went for a pleasure trip in the Ritumat garden in the heavenly Trikuta mountain area. As he was happily sporting there in a lake with his wives and children, suddenly a crocodile caught his leg in its jaws. He struggled with all his strength to release himself. Even the demigods were astonished to see this unusual fight. Being helpless, unable to save himself from danger, Gajendra was extremely afraid of being killed.

Introspecting in that predicament, Gajendra concluded that the other elephants – his friends, relatives, and wives – could not do anything to rescue him. So he was inspired to seek shelter of God. By God’s grace he remembered a prayer he had memorized in his previous life. The following verse (Bhagavatam 8.3.17) is a part of that prayer glorifying the all-merciful Lord Krishna. The explanation follows the verse.

Why should one surrender to someone else? Can’t we be independent?

Everyone experiences that there are problems in this world. We try to solve them by our own efforts, and to some extent we are successful. But material solutions are temporary, because the problems arise again and again. To permanently solve them, we need help from superior powers. So, like Gajendra, we should surrender to God (madrik prapanna). This proposal, or rather this conclusion of all scriptures, may not seem palatable to an average human engrossed in material pursuits. Many people do not even believe or realize they are unnecessarily undergoing material difficulties. But they might understand the following.

Gajendra was an animal (pashu). Srila Prabhupada says that everyone who identifies with the material body can be called a pashu. Just as Gajendra was caught by the crocodile, every conditioned soul is bound by the noose (pasha) of maya, or God’s illusory energy. Maya comprises three material modes that bind a bewildered soul in the cycle of repeated birth and death. Unlike an animal, a human being is provided with a higher intelligence to come out of it by seeking shelter of God.

We seek liberation (vimokshanaya) from material bondage by surrendering to God, and He reciprocates mercifully to the degree we are eager for deliverance. Although a pure devotee wants only to render unalloyed service to God, without expecting anything in return, including liberation, circumstantially a devotee may ask some favor from the Lord for self-preservation to continue to serve Him without obstructions. So one who desires deliverance from miseries or obstacles in life should fervently seek help from God. But why only God, why not someone else?

Only the Liberated can Liberate (muktaya)

We should seek help from a capable person. If we have fallen into a deep well, we can be pulled out only by someone outside the well. If we are drowning, we cannot be saved by another drowning person. When none of Gajendra’s strong elephant associates were capable of saving him, he sought help from God. Only God can liberate an entangled person because God is never entangled; He ever liberated (muktaya). Most people in this world are entangled by maya to a lesser or greater degree. And those who are not are so only due to the mercy of God, who reciprocated their desire to get disentangled. The Lord’s eternal associates are also never entangled. Therefore, only the omnipotent God and His pure devotees have the capability to liberate a person bound by material miseries. But is capability the only criterion?

One who has a million dollars certainly has the capacity to help a poor person in need of ten dollars. But without the willingness to help, the rich person wouldn’t help the poor one. The basis of such willingness is one’s merciful attitude. God is not only supremely capable, but unlimitedly merciful too (bhuri-karunaya). This combination of God’s mercy and capacity makes our surrender fruitful and the most effective means to drive away all miseries. But are capacity and mercy sufficient?

Attentive to the Devotees (namo alayaya)

We may be capable and merciful, but unless we are attentive to the needs or difficulties of others, we cannot help them. Being omnipotent and omniscient, God is always aware of our problems. His awareness is due to His attentiveness. When we offer prayers, He attentively listens to us. Being our well-wisher, He aims and endeavors to deliver us from material life, even before we pray. He is never lazy in regard to our deliverance. Someone might ask, “How can God be so attentive to our needs? He stays so far from us in His spiritual abode.”

Although God eternally stays in His spiritual kingdom, He also expands Himself as the Supersoul, or Paramatma (sva-amshena), in the hearts of all embodied beings (sarva tanu-bhrin manasi). Even if the living entity commits abominable actions and becomes an insect or worm in stool, the Lord doesn’t ignore him or her. He stays right within the heart, giving knowledge, remembrance, and forgetfulness.

Staying within the hearts of all, the Lord directly and attentively observes the desires, needs, and difficulties of everyone and mercifully solves the problems of those who surrender unto Him.

And that God (bhagavate) is none other than Lord Krishna, who is unlimited and the greatest (brihate), and is the source of all incarnations. He is capable, merciful, attentive, observant, and the closest well-wisher of all of us. So Gajendra sought shelter of the Supreme Lord Krishna, the merciful deliverer of all.

Hearing the helpless appeal of Gajendra, the Supreme Lord quickly came on the back of His bird carrier, Garuda, killed the crocodile with His disc weapon, and saved Gajendra.

Lord Krishna is always ready to save us from any difficulty at any time. But are we ready enough to seek His protection like Gajendra? Gajendra was exclusively dependent on the Lord, having no other source of protection. Seeking inspiration from Gajendra, let us humbly express our dependence on Krishna. Everyone is caught by the crocodile of eternal time and may die at any moment. The best course, therefore, is to seek shelter of Krishna and be saved from the struggle for existence. To reach this understanding is the ultimate goal of life.