The story of Lord Krishna’s appearance in this world combines seemingly ordinary elements with inconceivable ones. 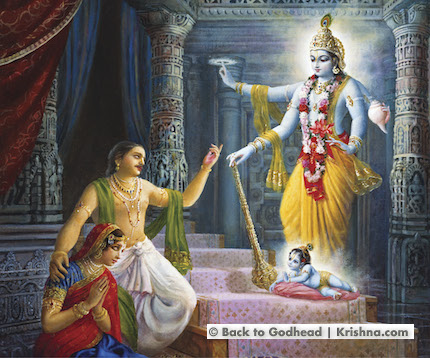 Every year, countless devotees of Lord Krishna eagerly await the blessed day of Janmashtami, the day when the Lord appeared on this earthly plane some five thousand years ago. Janmashtami is especially spectacular in the holy place of Vrindavan and the surrounding area, called Vraja-mandala, where Krishna enacted His charming and captivating childhood pastimes. While serving the Lord through a myriad of devotional ways – such as hearing about His divine activities, chanting His holy names, serving His deity form, and offering Him hundreds of food items – most devotees fast throughout the day in the mood of single-minded absorption in His loving service. The festivities of the day reach their climax at midnight with a grand celebration.

Lord Krishna Himself makes a categorical statement on the divinity of His birth while speaking to Arjuna in Bhagavad-gita (4.9):

“One who knows the transcendental nature of My appearance and activities does not, upon leaving the body, take his birth again in this material world, but attains My eternal abode, O Arjuna.”

In Brahma-samhita Brahma, the engineer of the universe, addresses Krishna as the cause of all causes. Krishna is thus unborn, and hence the events leading up to and including His “birth” are all unique and divine, as recounted in the pages of numerous Vedic scriptures, primarily in the Bhagavata Purana, or Srimad-Bhagavatam. Therefore many celebrated teachers and scholars in Vaishnava sampradayas (lineages) have written voluminous commentaries on just this one episode. 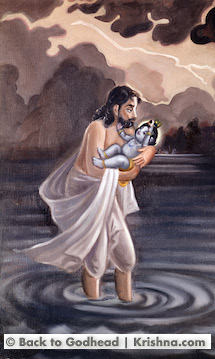 Undoubtedly, the birth process in this world is both a labor of love and a harbinger of celebration for the family members. However, the mother, the relatives, and the medical staff involved in the process would all attest that childbirth is a highly traumatic event even in a normal delivery, let alone when there are associated complications. In addition, for the mother the trouble generally does not end with the delivery. Even with a normal birth there may be postpartum depression, with symptoms ranging from irritation to frustration and anxiety.

What makes Lord Krishna’s birth different? To provide details and to clear misconceptions about this mysterious pastime, this article takes a theological journey primarily through Srila Vyasadeva’s Srimad-Bhagavatam and Harivamsha Purana – the appendix to the Mahabharata – and Srila Rupa Goswami’s Laghu-bhagavatamrita, along with Srila Vishvanatha Chakravarti Thakura’s comments on this matter.

Not an Ordinary Birth

We begin by observing how the entire episode of Krishna’s birth unfolds in Srimad-Bhagavatam.

Kamsa imprisoned Vasudeva and Devaki and mercilessly killed their six sons by smashing them against the prison-cell walls. The seventh pregnancy was transferred from the womb of Devaki to that of Rohini, another wife of Vasudeva, in Gokula Vrindavan. This child was Krishna’s elder brother, Balarama. Now Vasudeva and Devaki awaited the birth of the eighth child, predicted to be Kamsa’s nemesis.

Scriptures such as Srimad-Bhagavatam (10.2.16) explain that Krishna first appeared in the mind of Vasudeva (mana anakadundubheh), also known as Anakadundubhi. Then He transferred Himself to the mind of Devaki, who became extraordinarily beautiful on carrying the Lord. Though extremely fearful, Kamsa refrained from killing the Lord and decided to wait until He was born. Finally, after beautiful prayers by the demigods to the Lord within Devaki, at the auspicious time marked by the constellations in their best designated positions, Lord Krishna appeared from the heart (the seat of emotions) of Devaki (Srimad-Bhagavatam 10.3.8). The birth was not an ordinary semen-ovum affair. The word used in the verse is avirasit, “He appeared,” not that He was born. Appeared from where? The heart, where He is already situated as the Supersoul.

Srila Rupa Goswami uses the verb pradurbhavati for the act of Krishna’s birth, which means Krishna manifested or showed Himself.

“Then, in the middle of the night on the eighth day of the waning moon in the month of Bhadrapada, Krishna disappeared from Devaki’s heart and showed Himself on her bed in the birthing room of the prison.” (Sri Laghu-bhagavatamrita 1.5.445, translation by Bhanu Swami)

It was as though He disappeared from the heart of Devaki and then appeared out on the bed. The birth was not painful, like the birth of an ordinary child. Srila Rupa Goswami uses the words sukham shishur ajayata, implying that there was no labor pain.

“Krishna’s mother and the others believed that her child had taken birth in the ordinary manner and that His birth had been an easy one.” (Sri Laghu-bhagavatamrita 1.5.446)

Certainly, then, there was no question of symptoms of postpartum depression. Due to Krsna’s illusory potency, it appeared to Devaki and everyone else around that the birth was like that of an ordinary child, but without any ordeal. It was a smooth process.

In fact, Krishna appeared in His four-handed Vishnu form bedecked with His conch, club, disc, and lotus, bearing the mark of Srivatsa on His chest and the brilliant Kaustubha gem on His neck (Srimad-Bhagavatam 10.3.9–10). Smitten with both extreme wonder and parental love, Vasudeva and Devaki offered their heartfelt prayers. Then Devaki, out of motherly love, requested the Lord to hide His dazzling form so that Kamsa would not figure out His divinity. Such thick love that pays no heed to the opulence!

Krishna’s requesting Vasudeva to be taken to Gokula does not appear in Srimad-Bhagavatam, but it is mentioned in the Harivamsha Purana. The following verse there is quoted by several commentators to provide the missing link.

“Hearing Vasudeva’s words, the Lord withdrew His form, affectionately requesting his father, ‘Please take Me to Nanda’s house.’” (Translations from Harivamsha are by Bhanu Swami.)

Following Krishna’s orders, Vasudeva exchanged Krishna with Yashoda’s newborn daughter in Gokula, unbeknown to Yashoda, who was in deep slumber. Yashoda was parishranta, exhausted by the labor of childbirth (Srimad-Bhagavatam 10.3.53).

Thus it seems that the following chain of events would have occurred.

As a result of the above chain of events, it seems established that indeed there was a divine birth in Mathura, where Krishna was born in the prison cell of Kamsa to Vasudeva and Devaki.

Case rested, no? Not at all. In fact, the explanation of the chain of events only heightens the mystery. On a superficial level this may appear to be the flow of events, but knotty questions arise.

First, when awakened from slumber, the residents of Gokula recognized that Yashoda had given birth to a beautiful blue boy. And, indeed, Krishna is called the son (atmaja) of Nanda and Yashoda, as in the following verse.

“Shukadeva Goswami said: Nanda Maharaja was naturally very magnanimous, and when Lord Sri Krishna appeared as his son, he was overwhelmed by jubilation. Therefore, after bathing and purifying himself and dressing himself properly, he invited brahmanas who knew how to recite Vedic mantras.” (Srimad-Bhagavatam 10.5.1)

But if Krsna had just been exchanged for Yashoda’s daughter, atmaja is not the appropriate word. Atmaja means someone born (ja) from one’s self – one’s body or heart (atma). From the above explanation of events, Krishna should be called the atmaja of Vasudeva and Devaki, not Nanda and Yashoda. Could a learned transcendentalist like Shukadeva possibly have been careless in describing the Lord?

Second, why is Yogamaya Devi called anuja, the younger sister of Krishna, as in the following verse?

“The child, Yogamaya Devi, the younger sister of Lord Vishnu, slipped upward from Kamsa’s hands and appeared in the sky as Devi, the goddess Durga, with eight arms, completely equipped with weapons.” (Srimad-Bhagavatam 10.4.9)

And third, as we saw above, why did Yogamaya inform Kamsa that his archenemy had already been born somewhere else? If she was worried about Kamsa committing further atrocities on Vasudeva and Devaki, she could have just said that Kamsa’s enemy was somewhere else. There was no need to add “born.” And surely, she did not need to lie about where Krsna was born, given that Kamsa was already frightened to his core.

How do we resolve these questions?

All three questions get resolved by allowing the possibility that Krishna was also born to Yashoda on the same day as He was born to Devaki. In fact, not only the same day, but He was born to both Devaki and Yashoda at exactly the same time. This is indeed the case, as explained in our revealed texts and the devotional commentaries thereof. In order to fool Kamsa, Krishna manifested a month earlier – in the eighth month of pregnancy – to both Devaki and Yashoda. This happened on the ashtami-tithi (eighth day) of the eighth month, as mentioned in both the Harivamsha Purana and the Laghu-bhagavatamrita:

“Without the pregnancy period being completed, in the [eighth tithi of the] eighth month Devaki and Yashoda gave birth at the same time.” (Harivamsha)

“This same Krishna is Yashoda’s son eternally, and thus in His visible pastimes He also took birth from her.” (Sri Laghu-bhagavatamrita 1.5.450)

On the next tithi, or date, soon after Krishna’s birth at the midnight hour, Yogamaya was born to Yashoda, making her Krishna’s younger sister (anuja).

When Krishna was born to Yashoda, not only was Yashoda exhausted, but by Krishna’s arrangement all the residents of Gokula were put in slumber too, so they could not identify the gender of the newborn.

“Exhausted by the labor of childbirth, Yashoda was overwhelmed with sleep and unable to understand what kind of child had been born to her.” (Srimad-Bhagavatam 10.3.53)

How was this possible? It was due to Yogamaya sprinkling both awe and sweetness. Following Krishna’s birth, in the next few moments, Yogamaya was born to Yashoda. The bewilderment of the guards at the Mathura prison allowed Vasudeva’s unfettered journey to Gokula, and at the same time, the deep slumber of the residents of Gokula allowed for the smooth act of transcendental exchange that Vasudeva was supposed to enact.

“At that time Yashoda was bewildered by yoga-nidra. She gave birth to the daughter when all others were also bewildered.” (Vishnu Purana) This happened to be the next tithi. And finally, when Vasudeva reached Gokula, covered by the Yogamaya potency, he could not see Krishna by Yashoda’s side. He picked up Yogamaya and kept Krishna, whom he was carrying.

In the fifth chapter of its tenth book, Srimad-Bhagavatam presents Nanda Maharaja’s beautiful celebration on fulfilling his cherished desire to have son – a child more beautiful than a dazzling blue sapphire, with eyes putting to shame full-blown lotus petals. The celebrated Vaishnava poet Surdas sings of the celebration in Gokula:

No one go to the woods today!
Instead, bring all your cows and calves
And gaily adorn them,
For in Nanda’s house a child has been born
Sur’s Ocean, translated by John Stratton Hawley)

It is generally believed that Yashoda’s labor pain caused her to have a deeper affection for Krishna than Devaki had because Yashoda’s affection was divested of Devaki’s mood of reverence. Also, Yashoda’s lack of any semblance of maternal love toward Yogamaya in the pages of the Puranas is attributed to the absence of any remembrance, let alone pain or emotion, related to Yogamaya’s birth. We know from folklore and medical science that struggle in childbirth is indeed associated with greater affection of the mother for the newborn. And yet, how Krishna can amalgamate such mundane phenomena with His supernatural birth pastime is highly inconceivable. We can never fully fathom the inconceivability of Krishna. In a state of humility, we can at best strive to dovetail our intelligence to try to understand His glorious pastimes so that as aspiring seekers, we remain absorbed in their remembrance.