Srila Prabhupada explains that understanding spiritual life does not depend upon “material brain substance.”

By His Divine Grace A. C. Bhaktivedanta Swami Prabhupada, lecture given on August 3, 1968, in Montreal

To understand spiritual life, the most important subject, requires a special kind of intelligence.

“The supreme occupation [dharma] for all humanity is that by which men can attain to loving devotional service unto the transcendent Lord. Such devotional service must be unmotivated and uninterrupted to completely satisfy the self.” – Srimad-Bhagavatam 1.2.6 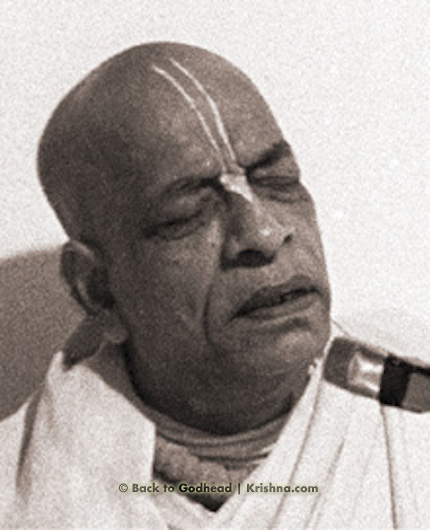 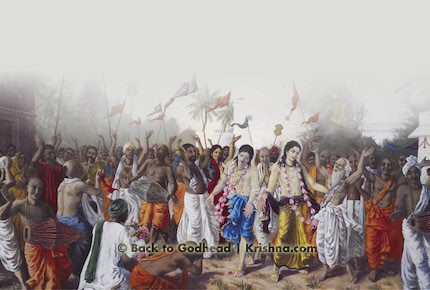 We are all seeking after that position, how to become completely happy. That is our whole struggle for existence. Anyone, in any place, any country, is struggling for existence, whether human being or animal or bird or beast. They are all trying to become happy. This happiness of the mind, or atma, is only possible when we are engaged in Krishna consciousness. That is the only remedy. There is no alternative.

Lord Krishna says in the Bhagavad-gita (4.7)

“My dear Arjuna, whenever there are discrepancies in the matter of dharma, or the execution of the real purpose of life, I descend.” You may take the word dharma to mean “religion” or “duty” or “nature,” as you like, but, as explained before, dharma means your actual, constitutional position. It is nothing artificial. The example again I am repeating: Fire is hot, and fire has light. You cannot separate light from fire or heat from fire. Therefore heat and light are its dharma, its real “religion.”

The dharma of the living entity, our dharma, is defined very nicely by Lord Chaitanya. Our dharma, or religion, is to obey the orders of the Supreme Lord, to engage ourselves in the loving, transcendental service of the Lord.

Krishna’s Appearance in this Age

In the present age, people have no idea what God is. They are asking, “What is God?” and they are proud of their education. Just see. This is the godless result of a godless civilization. This is discrepancy of dharma. So in this age, at this stage, when people have forgotten God, when they are saying “God is dead,” now this Bhagavad-gita or this Hare Krishna mantra has descended. Krishna says,

Krishna says tadatmanam srijamy aham. Srijami generally means “I manufacture.” You or I may make this glasses case. This is srijami. But Baladeva Vidyabhushana, a learned scholar, explained that here srijami means “I appear.”

The Mayavadi philosophers take advantage of this word and say that Krishna or any incarnation of God is created, just as so many material things are created. Anything we find in this room is created. This dictaphone, this microphone. But if you say, “Krishna is created; anything created is material; therefore Krishna is also material,” then you will have misunderstood.

Why does Krishna appear? That is explained in the next verse:

“To deliver the pious and to annihilate the miscreants, as well as to reestablish the principles of religion, I Myself appear, millennium after millennium.” (Gita 4.8) “In every yuga, or millennium . . .” There are different great periods, just as in your country in the whole year there are different periods called spring, summer, fall, and winter. They are coming in rotation. Similarly, there is a rotation of time that is divided into four millenniums called Satya-yuga, Treta-yuga, Dvapara-yuga, and Kali-yuga. Krishna says, dharma-samsthapanarthaya sambhavami yuge yuge: “To establish dharma I come in every millennium.”

Now, one may inquire, “Krishna appeared in the Treta-yuga. When is He going to appear in the Kali-yuga?” That is mentioned in the Srimad-Bhagavatam and other authentic Vedic literatures. In the Kali-yuga there are three different incarnations. One is Lord Buddha, another is Lord Chaitanya, and another, in the last stage of this age, is Kalki.

We get this information from the authority of the Bhagavatam. We have to accept who is an incarnation according to the authentic scripture. We cannot accept anyone who claims, “I am also an incarnation.” No. In the shastras, the authentic scriptures, the symptoms of the incarnations are foretold. Regarding Lord Buddha it is mentioned, “In such and such place, in such and such form, performing such and such activity, Lord Buddha will appear.” Similar descriptions are there for Lord Chaitanya and Kalki. As for Lord Buddha, in the Bhagavatam the name of Lord Buddha’s mother is mentioned. And his activities are also mentioned. What are his activities? His activities are not very pleasant. Sammohaya sura-dvisham: “The Lord will appear as Buddha in order to sammohaya – bewilder – the atheist class of men.” (Bhagavatam 1.3.24) His activity was to cover the atheist class of men, those who do not believe in God. Lord Buddha said, “Yes, there is no God. There is void only. Believe me.” Just see. He is an incarnation of God, and he is saying to the people amongst whom he is preaching, “There is no God.” But he is God.

Is this not a process of cheating? Yes. But this process of cheating is not exactly cheating; it is for the welfare of the atheistic persons. Sometimes the father cheats the son. The son is insisting on keeping a one-thousand-dollar note, and the father is asking, “My dear son, please deliver it.” “No, I shall not.” So the father gives him a lozenge: “My dear son, would you like to take this lozenge?” “Yes, give me.” “But you have to give me that paper.” “All right, take it.”

So this is not actually cheating, because the father knows, “This boy will destroy this one thousand dollars, so it is necessary to give him that two-cent lozenge and take that thousand-dollar paper.” Similarly, when people become too atheistic, in order to bring them back to the understanding of God it is sometimes necessary to act as Lord Buddha did.

Now, those who follow Buddha’s philosophy say, “There is no soul. There is no God.” But there are thousands and thousands of temples of Lord Buddha, and people worship him. Especially in countries like Japan and China and Burma there are thousands of temples, and the people exactly worship in the same way as we are worshiping Jagannatha. The lamp is given, the candle is burned. They offer very respectfully, and there are brahmacharis, sannyasis. All these principles are there. But officially there is no question of God.

Chaitanya Mahaprabhu in the Bhagavatam

Lord Chaitanya is also mentioned in the Srimad-Bhagavatam (11.5.32):

“In the Age of Kali, intelligent persons perform congregational chanting to worship the incarnation of Godhead who constantly sings the names of Krishna. Although His complexion is not blackish, He is Krishna Himself. He is accompanied by His associates, servants, weapons, and confidential companions.” Krishna will appear in the Kali-yuga. His symptoms are these. Just as Lord Buddha’s symptoms were described, similarly Lord Chaitanya’s symptoms are also described. Krishna-varnam: “He belongs to the category of Krishna Himself” or “He is always chanting ‘Krishna.'” His business is simply to chant Hare Krishna. Krishna is chanting Hare Krishna. And tvisha akrishnam: “But His complexion is not krishna, black.” Lord Chaitanya appeared with a very fair complexion, a very nice golden color. You have pictures of Lord Chaitanya. Very beautiful. He was a very beautiful figure. Tvisha means “by His complexion,” and akrishna means “not black.” Therefore one of Lord Chaitanya’s names is Gaurasundara. Sundara means beautiful, and gaura means fair. Another of His names is Gauranga, “whose body is very fair.”

Sangopangastra-parshadam: “He is always accompanied by some associates,” especially Lord Nityananda, Lord Advaita, Srivasa, Haridasa, and others. You have seen the pictures. He is chanting and dancing with His associates and others. When Lord Chaitanya was present, whenever He would go He was dancing, and He chanted “Hare Krishna, Hare Krishna, Krishna Krishna . . .” He was so beautiful and attractive that people would follow Him. Thousands and thousands of people would follow, chanting Hare Krishna.

When Lord Chaitanya started this movement in Bengal, He was a boy of twenty years old, and many, many people were following Him. So the Muslim governor, Nawab Hussein Shah, inquired of his minister, “Who is this person that He is chanting Hare Krishna and so many people are following Him?”

The minister was a Hindu. He thought, “He is a Muslim king, so he may not like this movement.” Therefore he wanted to hide it.

“My Lord, you have been misinformed. He is not very important. Some crazy fellows are following Him. A few only, not many.”

The Nawab replied, “No, don’t try to hide the facts. He must be a great personality. Otherwise, why are so many people following Him?” That was his remark.

Wherever Lord Chaitanya went, He was always followed by many associates –sangopangastra-parshadam. These are the symptoms.

And how to worship that Supreme Personality of Godhead, Krishna, in this age? Yajnaih sankirtana-prayair yajanti hi su-medhasah: “This form of the Personality of Godhead is worshiped by the intelligent class of men.” Su-medhasah. Su means very good, and medhasah means brain substance. One who has got very good brain substance will understand this sankirtana movement nicely. In our India, especially in Bengal, sometimes they say to a dull-brained man, “Oh, you have got cow dung within your brain. You have no brain substance.”

Su-medhasah means one who has got good brain substance. But one thing I must explain here. As far as spiritual life is concerned, it does not depend on the material brain substance. It is a different thing. It is on the spiritual platform. It has nothing to do with this bodily construction. You must remember. We don’t make any distinction that a man can be more Krishna conscious than a woman. No. Women can be more Krishna conscious because they are very simple. They can accept any religious system. Generally women accept it because they are very simple. They have no crooked mind. Therefore sometimes they are exploited.

The bodily construction of a man is different from that of a woman, and the brain substance may also be different, but that does not disqualify any woman for spiritual advancement in Krishna consciousness. That is clearly defined in the Bhagavad-gita (9.33):

“O son of Pritha, those who take shelter in Me, though they be of lower birth – women, vaishyas [merchants], and shudras [workers] – can attain the supreme destination.” It doesn’t matter whether one is a woman or a mercantile-class man or a shudra. It doesn’t matter. These classes are generally understood to be less intelligent. But Krishna is opening the path for everyone. Mam hi partha vyapashritya. If one accepts Krishna very seriously – if one takes shelter of Krishna specifically – then one may be a woman or a laborer or a merchant. It doesn’t matter. He or she can go to the highest perfection.

And in the next verse (Gita 9.32) it is said, kim punar brahmanah punyah: “And what to speak of the intelligent class?” They are certainly elevated to the highest position.

The shastra says, yajnaih sankirtana-prayair yajanti hi su-medhasah: “Those who are intelligent will perform worship of the Lord by this yajna, chanting Hare Krishna.” Yajna, or sacrifice, means to satisfy the Supreme Lord Vishnu. That is yajna. Now, in this age the Supreme Lord is satisfied simply by sankirtana, or congregational chanting: Hare Krishna, Hare Krishna, Krishna Krishna, Hare Hare/ Hare Rama, Hare Rama, Rama Rama, Hare Hare. This is mentioned in the shastra (Brihan-naradiya Purana 3.8.126).

And it is very easy. Simply by chanting Hare Krishna you gradually develop your Krishna consciousness to the highest platform. So one who has accepted the simple method recommended for this age is called intelligent. That is required. That much intelligence we must have.