How to view the seemingly impossible entities in the epics in a way that allows the valuable lessons of these great works to benefit us.

How can we make sense of the universe portrayed in the Ramayana and Mahabharata, filled as it is with seemingly impossible beings?

Why the Unfamiliar Often Seems Unacceptable

The human mind has its own way of structuring our perceptions so that we can function properly. Ghosts and other such supernatural beings disturb us not just because they threaten us directly but also because their very existence threatens the foundational order of our life. Suppose we encounter doors that seem to open with nobody nearby or objects that fall down without any apparent cause. These eerie occurrences alarm us not just because they indicate the presence of something unseen that might be malevolent, but also because they threaten our very conception of what we need to take into account while functioning in our daily lives. If we are walking on a rural road, we might be careful to watch out for snakes or other dangerous creatures. But if a stone from the road suddenly jumps up and hits us on the face, the result is not just an injury to our body, but also a threat to our conception of how things are and what things we need to watch out for. No wonder we aren’t comfortable with whatever seems utterly unfamiliar. And for many of us, supernatural beings such as demons can seem utterly unfamiliar. 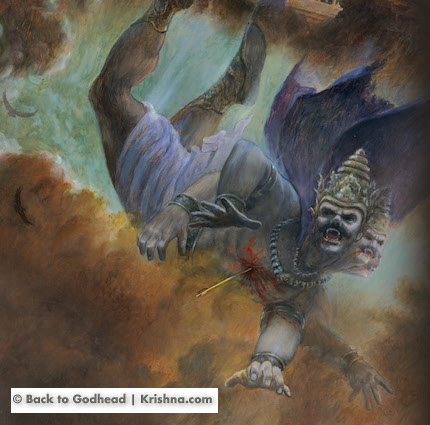 While some of us may be curious when we encounter the unfamiliar, that curiosity is more often than not within the context of security – we may want to take some calculated risks to increase our knowledge, but won’t want to recklessly rush into total uncertainty. Intrepid explorers may be driven by curiosity to unfathomable depths of the ocean, to unscaled heights of space, or even to lands never before reached by humanity. But if those explorers are so foolhardy as to rush blindly into the unfamiliar, they might not live long enough to explore much.

Therefore the structuring of our perceptions is necessary for our survival and functioning, and requires that, at least initially, we withhold acceptance of things that seem strange. Only when we can discern at least an overall context that seems familiar can we place unfamiliar things or beings within our pre-existing structure of perceptions. When we get some sense of who or what they are, what they do, and especially how they are likely to affect our world, then gradually that familiarization leads to acceptance.

Due to our default reservations about the unfamiliar, we naturally question the presence in the epics of beings such as demons that we don’t see in our normal day-to-day lives. Of course, we see nowadays an increasing variety of beings in the fictional worlds of the Marvel Universe. Indeed, beings with supernatural powers, as found in comic books or movies, fill our entertainment menu, and even our mental landscape. We know that such beings are fictional. Are the characters in the epics similarly fictional?

Humility Is the Key to Discovery

Before deeming an epic’s strange beings fictional, we can consider how what we might have once dismissed as fictional has turned out to be factual in, among all places, the world of science. Our study of the world of matter has revealed matter to be far more complex than what had been previously conceived by even the pioneering scientific minds of the past. Toward the end of the nineteenth century, Lord Kelvin (in)famously said that the study of physics, which is essentially the study of matter, had more or less reached its end; future generations of physicists would have nothing more to do than to just fill in the details.

In an ironic twist that is a lesson in humility, the developments of atomic physics, especially in the quantum domain, opened an unfathomed and possibly unfathomable universe within the atom. If science with its focus on the study of matter can discover how matter is far more complicated than our preconceptions, then couldn’t we have a similar humility in the domain of consciousness? Might past spiritual researchers who adopted a more consciousness-centered approach to reality have experienced levels of reality different from what we now experience? Might they have encountered conscious beings different from what we presently encounter? The Bhagavad-gita explains that consciousness comes essentially from a nonmaterial spark of spirit. And that spark, being transcendental to matter, can manifest through any suitable material medium (Gita 2.24–25). Thus, conscious beings can assume forms radically different from the forms in our experience, which might include forms such as those of demons.

Even if we grant the possibility of the existence of such beings, the question arises: Why are they not visible now when they were visible earlier? One reason is that, as the epics indicate, in the past the universe was better connected – there was greater interaction between various kinds of conscious beings who exist at different levels of reality. In the current cosmic age known as Kali-yuga, as human consciousness shrank because of its obsession with matter, our connection with other strata of reality and with beings who normally inhabit those different strata decreased. While such reasoning does not prove the existence of demons, it does provide some rationale for us to adopt a humbler approach when encountering the unfamiliar in the epics.

Moreover, we need to keep in mind the limitations of the inductive method in extrapolating from our finite experience in our time and space to a time vastly different from ours and to a space that encompassed levels of reality far different from ours. If we focus on what the actions of the demons convey – not on the rationality of their existence – our study will be more in harmony with the purpose of the epics themselves. They don’t obsess over establishing the existence of the demons; they focus on demonstrating through the demons the consequences of character flaws and ill-considered choices. Thus they provide us vivid narratives that can inspire us to choose wisely. By aligning our focus with the epics’ focus, we can avoid the pitfall of intellectual arrogance and find in the epics many insights for our ethical empowerment.

Finding the Familiar in the Unfamiliar

Once we get past that mental block of visceral skepticism, we can appreciate that demons often share our human desires, emotions, aspirations, and apprehensions; they just have a different set of physical tools and abilities to fulfill their desires. Thus a demon king with ten heads might initially seem outlandish for us, but instead of obsessing over the strangeness of the form, we can focus on how his desires are not so different from ours. In the Ramayana the ten-headed Ravana craves political power, sensual pleasure, and perpetual life – cravings we can easily identify with. He has extraordinary powers, such as the ability to regenerate his heads or hands when they are cut off. With such powers he seeks to pursue his ordinary creature desires with extraordinary brutality. He often transgresses, blatantly and brazenly, the boundaries of civilized conduct that keep human society orderly.

Through such narratives, the epics prod us to ask whether his extraordinary powers were blessings or curses. If Ravana hadn’t had the blessings he had solicited and received from the gods, he wouldn’t have terrorized the universe so much. Lack of extraordinary powers would not only have prevented him from doing so many misdeeds but would also have rendered him unable to inflict so much suffering on his countless victims.

We often crave greater ability than what we have presently because we feel inadequate and insecure when we compare ourselves with others of superior ability. While greater ability can be helpful if used properly, it can also be harmful if used improperly, as demonstrated through stories like those of Ravana. More important than expanding our ability is elevating our mentality. Extraordinary ability with an ordinary mentality that craves power and pleasure may well lead to extraordinary perversity. Why? Because what we refer to as the ordinary mentality is not so much harmless as weaponless. That typical mentality has a fair share of human vice within it. Despite the presence of vice, we hesitate to act in harmful ways because we fear the consequences; we know we can’t get away with such actions.

The same principle applies to our giving in to temptation. Most of us hesitate to give in to temptation, especially the temptation of something readily accessible, not so much because we have the moral strength to turn away from temptation, but because we have the common-sense awareness that we aren’t shielded from the consequences of indulgence. But if we were to acquire extraordinary powers by which we believed we would no longer be held accountable for our indulgences, then many of us would indulge far more than we presently do. Thus when Ravana thought he could get away with anything, he started sacking kingdoms, slaughtering sages, and seizing damsels – nonchalantly. He even prided himself on his ability to do things others couldn’t do or couldn’t get away with.

Thus if we look at the characters in the epics beyond their strange forms and strange abilities, we will find mentalities that seem eerily or even scarily similar to ours. When we familiarize ourselves with the world of the epics, wherein demons are a normal presence, that familiarization will make the existence of demons not just possible, but also valuable for us to learn vital lessons for our self-improvement. The epics have served humanity, indeed millions of people, for millennia because of the invaluable and even indispensable ethical lessons that can be drawn from their characters. The epics stand ready to similarly empower us.