At times, this disparaged emotion can serve a spiritual purpose.

Although Lord Krishna rebukes Arjuna for lamenting, lamentation can play a role in our spiritual life.

It is difficult to tolerate separation from a beloved. The loss of a friend or relative can affect us for months or years. Chaplains and psychologists have special counseling for people who suddenly find themselves grieving for a loved one.

I lost my mother two years ago, and feelings of “someone very important is missing” still come over me unexpectedly. I once knew a woman who never failed to shed tears whenever she recalled a death in her family that happened thirty years before. 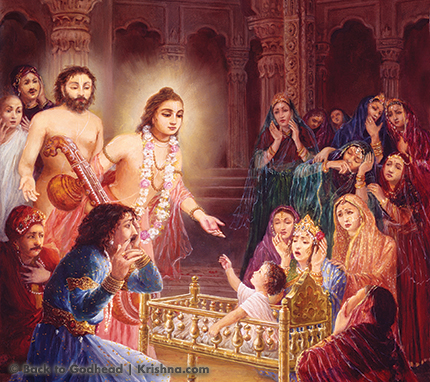 It’s no wonder that “loving memory” bouquets, garlands, balloons, pinwheels, statues, and even toys are placed at hundreds of thousands of burial or cremation sites everywhere, dedicated to the deceased.

A devotee friend who worked for some years as receptionist at a crematorium spoke of clients in her office crying and demanding, “What did you do with my mother?” or “Where is my husband? What have you done with him?” Grief can trigger desperate behavior and depression. Some grievers feel haunted or possessed by the ghost of the missing person they hanker for.

This is a difficult topic. To deal with it effectively, it is critical that we truly understand the lives of our loved ones and everyone around us. When we invest our consciousness in only the temporary body and mind of another person as if these are the essence of his or her existence, we miss the truth. Escaping our perception is the amazing spirit soul, the servant of Krishna.

Perhaps no one comprehends the symptoms of the soul, as well as the laws of death, better than Yamaraja, the lord of death. He once took the form of a young boy to disguise his real identity in order to approach the grieving queens of the king Suyajna. His instructions interrupted their wailing.

Yamaraja said: “O lamenters, you are all fools! The person named Suyajna, for whom you lament, is still lying before you and has not gone anywhere. Then what is the cause for your lamentation? Previously he heard you and replied to you, but now, not finding him, you are lamenting. This is contradictory behavior, for you have never actually seen the person within the body who heard you and replied. There is no need for your lamentation, for the body you have always seen is lying there.” (Srimad-Bhagavatam 7.2.44)

Yamaraja’s advice to the queens is a striking paradox. He says, “You think you saw him, but you never did. What you ‘lost’ is here; you never lost it.”

Had they ever seen the inner spirit self of the person they revered as husband and king? If not, how can they claim they lost him? Was their attachment based on their bodily relationship with him? Well, his dead body is still theirs to behold.

The Bhagavad-gita addresses the problem of material lamentation when the soldier Arjuna is forced to encounter opponents on the battlefield, some of whom are relatives and teachers. They are hell-bent on destroying him, but the thought of their deaths at his hands has set his mind reeling.

Arjuna uses the word shoka (lamentation) to describe his condition. He says he is so affected by shoka that his senses are drying up. He turns pale, trembles, and drops his famous bow, called Gandiva. His shoka for his loved ones decides everything, even if it means forfeiting a kingdom and taking to the life of a beggar. This brings us to the reason Krishna speaks the Bhagavad-gita to Arjuna. Srila Prabhupada explains: “Bhagavad-gita was spoken by Sri Krishna to Arjuna to dissipate the lamentation of the common man.”

What is this lamentation of Arjuna and also of the common man? It is the ignorance of the transitory nature of this lifetime – ours and others’. We put implicit faith in a temporary, yet complicated, arrangement. Krishna tells Arjuna, “You are speaking like a very knowledgeable man, Arjuna. You speak of dharma, morality, ethics, military codes, family traditions. Still, you don’t see what is about to happen. By their karma these soldiers are as good as dead. Your lamentation is of no consequence.”

Yamaraja told the queens they were fools, and Krishna is telling Arjuna that “mourning for what is not worthy of grief” is the business of fools. It is the kripana, or miserly person, who refuses to understand his real duty in life. A kripana invests his energy in temporary, illusory attachment for his own body and the bodies of his dear ones without any sacrificing for knowledge and higher values.

Sri Krishna speaks a series of verses in the Gita to carefully respond to Arjuna’s doubts, five of which include the words na, never, and socitum, lament:

Krishna also repeatedly uses the words na arhasi: “You do not deserve [to lament].” It may seem inappropriate to tell a grieving person that he or she doesn’t deserve to lament. Yet the Supreme Personality of Godhead says it, and He explains why, giving the superior information regarding our indestructible nature.

“This individual soul is unbreakable and insoluble, and can be neither burned nor dried. He is everlasting, present everywhere, unchangeable, immovable, and eternally the same. It is said that the soul is invisible, inconceivable, and immutable. Knowing this, you should not grieve for the body.” (2.24–25)

To take the material body of our loved one as the only representation of that person is like looking at a jewel with all but one facet covered, allowing but a little light to come in. We allow only one facet, one dimension, of our loved one’s self to be revealed, and only according to our limited ability to see it.

With the four defects of human frailty – imperfect senses and the tendency to cheat, make mistakes, and be in illusion – we do not deserve to claim we know another person accurately. The confines of the bodily relationship do not allow for it.

Arjuna especially lamented for two persons, Drona and Bhishma, who are fully described in the pages of the Mahabharata. Drona was the kingdom’s military guru. Arjuna highly revered Drona, and Drona regarded Arjuna as his brightest, most skilled archery student. When conflicts led to war, however, Drona was allied with the side of Arjuna’s ill-fated opponents, including cousins and elders. Arjuna worried for the fate of Drona.

Additionally, Arjuna’s lamentation was due to his relationship with Bhishma, a beloved elder of his family. Bhishma was the best of the kshatriya commanders. He always pursued dharma and loved and served Lord Krishna. He helped raise the Pandava brothers when they were orphaned. He held young Arjuna on his lap and was like a grandfather to him. Anxious to protect both sides, the Pandavas and the Kurus, Bhishma supported the message of peace Krishna brought to the Kuru’s court on behalf of Yudhishthira.

Long before, however, Bhishma had vowed to remain a celibate warrior for life and always protect the Kuru king. Even when the Kurus became unjust and treacherous, he kept his promise to defend the Kuru kingdom. To Arjuna’s sorrow, the great affectionate Bhishma was thus obliged to fight against Arjuna, his brothers, and their allies.

The drama of this intrigue is showcased in the pages of the Bhagavad-gita for a specific purpose. A war of smaller import, fought for trivial reasons by ordinary opponents with no profound, intimate relationships with one another, would not serve to bring us the Gita’s transcendent lesson. Arjuna’s dilemma, however, brought a war waged on the very terms life forces upon everyone, the potential loss of every dear friend, relative, brother, or sister we have ever known – a surety, for none of us escapes our own death and the loss of everything and everyone around us.

Thus Arjuna’s fine sentiments and his right to lament are sorely tested.

A devotee may accept lamentation when it is a matter of hankering for the association of a great devotee of the Lord. Arjuna had to fight Bhishma for taking the side of adharma, and Krishna required Arjuna to let go of his lamentation to challenge Bhishma. When the wounded Bhishma was on his deathbed, however, Krishna and Arjuna shared strong lamentation for the stalwart warrior, who had served as a great devotee of the Lord.

Whether great devotees travel away from us or leave this world altogether, lamentation for their loss carries every hope for progress in spiritual life. Whereas material lamentation is a dead-end road in which we absorb ourselves in entangling thoughts of our loved one’s mortal condition, lamentation in separation from a devotee is an integral part of the shining path of progress to pure devotional service.

Krishna’s devotees possess the right to useful and genuine lamentation because it is based on missing the actual person who has left, a pure soul whose association reveals Krishna consciousness to us. We strongly, deeply miss a soul whose memory only enthuses our love of God. To remember that great soul is the most precious link to the beauty, grace, and moods of love present in the spiritual world in exchanges between Krishna and His dear confidential loved ones.

Feeling separation from Srila Prabhupada, the greatest teacher of Krishna conscious practice, is the very basis of the lives of the hundreds of thousands of Krishna conscious practitioners he left behind. Amazingly, in the feelings of lamentation in separation from His Divine Grace Srila Prabhupada there is no separation, for remembering him and serving him only renews and intensifies the relationship.

Sri Chaitanya Mahaprabhu, who was Krishna playing the role of a devotee, displayed one very prominent sentiment – the mood of intense longing for Krishna, called vipralambha seva, or “service in separation.” Lord Chaitanya showed in His own life how lamentation can fuel the most powerful and profound emotional flavors in the devotional service of the Lord.

He prayed, “O My Lord, in Your separation I am feeling one moment to be like twelve years or more. Tears are falling from My eyes like torrents of rain, and the whole world appears vacant in Your absence. I know no one but Krishna as My Lord, and He shall remain so even if He handles Me roughly by His embrace, or makes Me broken hearted by not being present before Me. He is completely free to do anything and everything, for He is my most worshipable Lord, unconditionally.” (Sikshashtaka 7–8)

When Lamentation Is Purification

The strong emotion found in grief and lamentation is a natural part of the human condition, seen in even the great souls. The great souls’ lamentation, however, is tempered and qualified by great spiritual wisdom. That same wisdom is always available to us in the pages of the Bhagavad-gita and the Srimad-Bhagavatam, no matter how dark our hour of suffering.

The reality of repeated birth and death in the material world is surely lamentable, whether we lament for the loss of another or for our own failing body.

Furthermore, Srila Prabhupada once said that “lamentation means purification.” He was commenting on a song by Narottama Dasa Thakura in which the author laments not having absorbed himself in Lord Chaitanya’s sankirtana movement. Realizing that we are not these material minds and bodies and being sorry that we are not fully Krishna conscious is the beginning of our journey home, back to Godhead.

Lamentation that inspires us, once and for all, to let go of our attachments to this world and to only hanker for the supreme goal of love of God is the perfection of lamentation. It is the worthy exercise of the right to lament.