Srila Prabhupada introduces the concept of disciplic succession to his storefront-temple audience in 1966.

By His Divine Grace A. C. Bhaktivedanta Swami Prabhupada

Lord Krishna reveals the principle by which His supremely beneficial teachings can be understood.

“The Supreme Personality of Godhead said: Listen again, O mighty-armed Arjuna. Because you are My dear friend, for your benefit I shall speak to you further, giving knowledge that is better than what I have already explained.” – Bhagavad-gita 10.1 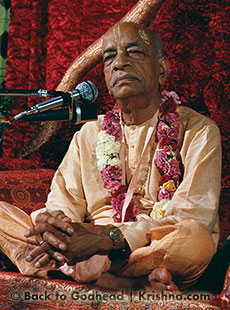 In the beginning of the Bhagavad-gita, in the fourth chapter, we have discussed the point that the Bhagavad-gita was specifically instructed to Arjuna for his one qualification that he was a devotee. Bhakto ‘si me sakha cheti rahasyam hy etad uttamam (4.3). The Lord said, “The mystery of the Bhagavad-gita is very confidential. Without one’s becoming a pure and unalloyed devotee of Mine, it is very difficult to understand.”

Actually it is so. In the market you’ll find many commentaries on the Bhagavad-gita. In India I have counted that there are about six hundred and forty-five different commentaries on Bhagavad-gita. One doctor in Bombay has interpreted Bhagavad-gita as the talks between a patient and a medical practitioner. He has imposed the idea that Krishna is the physician and Arjuna is the patient. And in his commentary he has tried to interpose all the meanings of anatomy, physiology – everything in his own imagination.

Bhagavad-gita is being taught by the Supreme Personality of Godhead to Arjuna. Krishna is repeating, yat te ‘ham priyamanaya vakshyami hita-kamyaya: “Because you are My dear friend, I desire that you become prosperous, happy. Therefore I am speaking to you.” Do you think that Krishna is not interested in others? Not interested in making them happy and prosperous? No. He’s equally disposed. He wants everyone to be happy and peaceful and prosperous. But they do not want it. That is the difficulty.

The sunshine is open to everyone. Sunshine is not for any particular nation or particular country or particular person or community. It is open for everyone. But if somebody wants to remain in darkness, closing his doors, not coming out, then what can the poor sunshine do for him?

“O son of Pritha, those who take shelter in Me, though they be of lower birth – women, vaishyas [merchants], and shudras [workers] – can attain the supreme destination.” There are different kinds of species of life. Some of them are considered lower; some of them are considered higher. That is our material conception. And actually, according to the different qualities, according to the different modes of nature, there are different situations, and there are lower-grade and higher-grade understandings. That is a fact. But Krishna says, “Anyone, never mind what he is – even of lower birth – can achieve the supreme destination.” Bhagavad-gita is transcendental subject matter. It does not depend on the qualification of the student. Anyone can understand Bhagavad-gita provided he agrees to understand according to the principle. That’s all.

The Principle for Understanding

The present ruler of the sun is known as Vivasvan. His son was Manu, the father of mankind, and Manu’s son was the king Ikshvaku. King Ikshvaku was the king of this earthly planet, and from him this parampara system, or disciplic succession, is coming down. But it has broken down. The Lord said to Arjuna, sa kaleneha mahata yogo nashtah parantapa. “In the course of time that disciplic succession has now broken. Therefore I make you My disciple.” 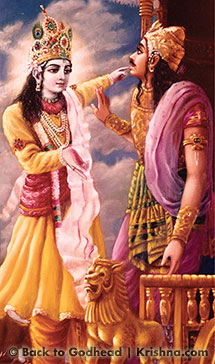 What is Arjuna’s position? You’ll find the answer in this chapter, which we are now just beginning. He’ll say, sarvam etad ritam manye yan mam vadasi keshava (10.14). “My dear Krishna, whatever You are speaking I accept.” That should be the process of understanding Krishna’s words in the Bhagavad-gita. Not that “I don’t like this, so I’ll reject this portion. I like this portion, so I accept it.” This sort of studying Bhagavad-gita is useless, nonsense. Sarvam etad ritam manye. “Whatever You have said, I accept it.” That is stated.

If anyone wants to understand the spiritual science or the science of Krishna, then he should associate with the satam, those who are pure devotees. When discussions take place between pure devotees, then the potency of spiritual knowledge, as depicted in the scriptures and sacred books, becomes revealed. Armchair mental speculators discussing Bhagavad-gita is useless, futile. Here it is stated, satam prasangan mama virya-samvido bhavanti hrit-karna-rasayanah kathah. If it is discussed in the association of pure devotees, then the potency of that spiritual language will be revealed.

In the Svetashvatara Upanishad (6.23) it is stated,

Similarly, here it is stated by the Supreme Lord, “Because you have become My dear friend . . .” We have to cultivate such practice in Krishna consciousness that we may become dear to God. My spiritual master used to say, “Do not try to see God. Just act in such a way that God will see you.” Just try to understand. This is very nice. If I want to see God, I cannot make God my order-supplier: “Please come and I’ll see You.” God is not so small that I call Him and at once He’ll come. No. We have to qualify ourselves. By your qualification God Himself will come and see you.

There are many examples, such as Dhruva Maharaja. He went to the forest to undergo severe penances to see God. When he saw God, God asked him, “What do you want? What benediction do you want? I shall give it to you.” Dhruva Maharaja, a small boy, five years old, said, svamin kritartho ‘smi varam na yace: “Now I am so satisfied that I have nothing to ask from You.” One who can perceive God has no more demands because he’s transcendental to all these material demands.

As long as we are in the material sense, we are always dissatisfied. We are now in the state of asat. Asat means circumstances that will not continue. Any circumstance of this material world is temporary. Suppose you are very happy. Oh, then your happiness is temporary. Suppose I think I am in a very sorry plight, or I am in distress. That will also not exist for some time. It is just like seasonal changes. This is called duality. We are feeling happy or miserable, we are feeling cold or hot – everything is duality. But these things are coming and going. When one is in the transcendental position, he is above this duality; he’s in the absolute.

If we want to go to that absolute stage, then this is the process, this Krishna consciousness. Krishna is within everyone as the Supersoul, the Supreme Personality of Godhead as Paramatma. He’s seated in everyone’s heart, and as you become purified, as you become sincere, all dictation will come from within and He will show you the path. By following it you shall be happy and prosperous, and at the end, by quitting this body you shall reach the supreme abode of Krishna in the spiritual sky. All these points have been discussed in the seventh and eighth chapters.

Unknown Even to the Demigods and Sages

Lord Krishna says, “Nobody knows Me.” Sura-ganah means the demigods, those who are in the higher planets. Maharshayah means great sages. “They do not know.” What do they not know? Prabhavam. “My influence, or My activities, My power, My extensions.” Why? “I am the origin of all the demigods and great sages.”

Now, suppose we had a forefather ten generations ago. We do not know many things about him. We may hear by parampara or in the family history that ten generations ago we had a forefather. But we do not know him. And so many generations are coming from Krishna, the Supreme Personality of Godhead. In the beginning of this creation, Brahma was created, millions and millions of years ago. What do we know about Brahma and the demigods? So practically we do not know anything about God. It is not possible. Our tiny brain cannot approach the foremost platform where we can understand God.

In the Bhakti-rasamrita-sindhu (1.2.234) it is said, atah shri-krishna-namadi na bhaved grahyam indriyaih. Indriya means these material senses. We gather knowledge by the senses. But these material senses are very limited. It is not possible to understand God, or Krishna, by speculating with our mind. The mind is the center of all the senses. The senses help the mind gather knowledge. All our senses are imperfect. By imperfect senses we cannot reach the perfect or the unlimited. Therefore we cannot know in that way. Atah shri-krishna-namadi na bhaved grahyam indriyaih. It is not possible that by manipulating your different senses and knowledge and mind you can understand God.

Then how it is possible? Sevonmukhe hi jihvadau svayam eva sphuraty adah. If you engage your senses in the service of the Lord, then He’ll reveal Himself to your senses. We have to acquire knowledge of God through these senses. But in our conditional life the senses are all impure. Therefore these senses cannot understand God simply by speculating. It is not possible. Therefore the Lord says, na me viduh sura-ganah: “I cannot be known by the great sages.”

Now we have developed senses. A child’s understanding and his father’s understanding are different because the child’s senses are not developed. Similarly, we are here on this earthly planet, and there are many, many other, superior planets. The senses of the inhabitants there are far, far improved beyond ours. But still they cannot understand God.

“He who knows Me as the unborn, as the beginningless, as the Supreme Lord of all the worlds – he only, undeluded among men, is freed from all sins.” (10.3) Now, people can say, “What is the use of understanding God? Let God remain in His place. And let me remain in my place. What is the use? There is no necessity of bothering to understand God.” But Krishna says, “No.” If you don’t take that botheration, then you’ll never be happy. Nor will you be liberated. It is in your interest to understand God. Not that God will profit if you understand Him. No. You’ll profit if you understand Him.

Therefore He says, yo mam ajam anadim cha vetti loka-maheshvaram: “He who knows Me as the unborn, as the beginningless, as the Supreme Lord of all the worlds . . .” Loka-maheshvaram means the supreme proprietor or master of all planets, of everything. Asammudhah: without any doubt. Sa martyeshu: even in this material world. Sarva-papaih pramucyate: he becomes free from all sinful reactions – simply by knowing, understanding that God is great, that He’s the proprietor of everything, that He’s the friend of everyone, and that He’s the origin of everything.

Asammudhah, or “without doubt,” means you should not accept this knowledge simply because Bhagavad-gita is saying it or the Swami is saying it. You yourself should understand it without any doubt. When you understand doubtlessly that God is the proprietor of everything, you’ll be liberated and freed from all anxieties and miseries.

And the Bhagavatam (7.5.31) confirms this. Na te viduh svartha-gatim hi vishnum durashaya . . . People are making progress, but they do not know the ultimate goal of progress. Na te viduh: they do not know. And durashaya means some impossible hope. They are being conducted under the guidance of this illusory energy with some hope that is impossible to be fulfilled. Bahir-artha-maninah. Why are they thinking of that impossible hope? Because they are captivated by this material energy.