Despite an endless array of gadgets to occupy their time, people are bored – and the result is trouble.

As one journalist notes, boredom is responsible for “a profusion of negative outcomes.”

On the day after Christmas, 2016, an article with this headline went coast to coast in the United States: “After 15 Big Mall Fights, Police See a Culprit: Teenage Boredom.” According to a police officer quoted in the article, the cause of the fighting was that “teenagers have too much time on their hands.” 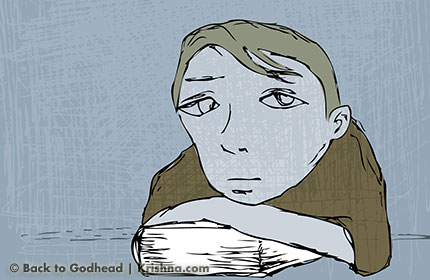 Similarly, Jean M. Twenge, a professor of psychology at San Diego State University, writes in a recent article in the magazine The Atlantic, “It’s not an exaggeration to describe iGen as being on the brink of the worst mental-health crisis in decades. . . . There is compelling evidence that the devices we’ve placed in young people’s hands are having profound effects on their lives – and making them seriously unhappy.”

Boredom and unhappiness are, of course, not limited to teenagers but are rampant in adults also. In an article in the Guardian, Sandi Mann writes that “despite the plethora of high-intensity entertainment constantly at our disposal, we are still bored. Up to half of us are ‘often bored’ at home or at school, while more than two-thirds of us are chronically bored at work.” And she explains why: “Our attention spans are now thought to be less than that of a goldfish (eight seconds). We are hard-wired to seek novelty, which produces a hit of dopamine, that feel-good chemical, in our brains. As soon as a new stimulus is noticed, however, it is no longer new, and after a while it bores us. To get that same pleasurable dopamine hit we seek fresh sources of distraction.”

Why does this matter? Because, in Mann’s words, “Research suggests that chronic boredom is responsible for a profusion of negative outcomes such as overeating, gambling, truancy, antisocial behaviour, drug use, accidents, risk taking and much more.”

This research validates what the Danish philosopher Søren Kierkegaard wrote over 170 years ago: “Boredom is the root of all evil.” To Kierkegaard, boredom is not just feeling weary because one is unoccupied or lacks interest in one’s current activity; boredom is not just a sense of emptiness due to an absence of stimulation. Boredom, he wrote, is the result of an absence of meaning in one’s life. This understanding explains why people today are overstimulated but existentially bored. In 2017, global spending for entertainment reached $2.2 trillion, yet there was also an increase in boredom and unhappiness.

Ancient Wisdom in Practice: A Solution

In his writings, Srila Prabhupada offers relief from this plight: “Serious students seeking the Absolute Truth are always overwhelmed with the work of researching the Truth. In every sphere of life, therefore, the ultimate end must be seeking after the Absolute Truth, and that sort of engagement will make one happy because he will be less engaged in varieties of sense gratification.” (Bhagavatam 1.2.10, Purport) In a similar vein, commenting on a verse toward the conclusion of the Bhagavad-gita (18.76), Prabhupada writes, “The result of Krishna consciousness is that one becomes increasingly enlightened, and he enjoys life with a thrill, not only for some time, but at every moment.”

The state of absorption that Prabhupada describes is the ideal; however, it’s rare. Those of us who are trying to be conscious of Krishna but have not reached such an elevated state may feel bored from time to time. What can we do?

Kierkegaard was clear about what would end his boredom: “What could divert me? Well, if I managed to see a faithfulness that withstood every ordeal, an enthusiasm that endured everything, a faith that moved mountains; if I were to become aware of an idea that joined the finite and the infinite.”

On studying Srila Prabhupada’s life and qualities, we can observe that he had a faithfulness that withstood every ordeal, an enthusiasm that endured everything, a faith that moved mountains. And part of Prabhupada’s life mission was to explain how the finite (the soul, or jivatma) is joined to the infinite (God, the Paramatma), which he did with a simple analogy: As the hand serves the body, so the jivatma is joined to the Paramatma through its desire to give pleasure and service to the Paramatma. Srila Prabhupada writes, “When we understand our true identity as spiritual beings, part and parcel of the Supreme Spirit, God, we understand that we are meant to serve Him just as the hand or foot serves the whole body.” (The Laws of Nature: An Infallible Justice, Introduction)

Perhaps Srila Prabhupada’s life and qualities can show us how to have not only a boredom-free existence but, beyond that, how to have a happy life by rejoining God, Krishna, the reservoir of pleasure.

While sometimes playful and humorous, Prabhupada was always perseverant, interested in others, and confident in his mission. He was curious and keenly observant, and he consistently saw and presented Krishna and His teachings from different points of view. He could concentrate and focus his energies. He was regular in his habits and also inventive and undeterred if something didn’t work after repeated attempts. And he gave himself time each day to reflect – often he would take his lunch alone, slowly, in a peaceful and beautiful place. His life was balanced. (For us, this may mean not neglecting our personal needs due to our social, professional, and family responsibilities.)

Prabhupada’s was the opposite of a humdrum, humiliating, servile life; it was a dynamic one in which he navigated the world and used all his capabilities to perform the sacred, all-important service of extricating us from our miserly, shuffling, mundane lives. He did this by repeatedly reminding us of who we are – spiritual beings – and who we’re permanently related to – God and His devotees.

Interestingly, Kierkegaard had seen boredom as “the despairing refusal to be oneself.” And what Prabhupada stressed – practically demanded – was for us to be ourselves, that is, to act as spiritual souls, tiny parts of God replete with God’s qualities of eternality, joyfulness, and cognition. Constitutionally the soul is meant to give pleasure to God and His devotees, and such pleasure-giving service is fresh because Krishna is nava-yauvana, ever fresh. Giving this sort of pleasure gives us the greatest pleasure. And this attitude is stimulated by spiritual love, love that is not motivated by personal gain. Surely it is due to our lack of realization of our spiritual identity and spiritual activity that boredom exists at all in this world.

Another reason why boredom has no place in a devotee’s life is that Krishna, the Supreme Person, is the ultimate source of everything in this world. Without exception, everything is a manifestation of His energy. He is the Complete Whole, and whatever manifests from Him is complete in itself. To experience boredom and unhappiness is to feel some lacking, but the only lacking is our perception, our “despairing refusal to be oneself.”

Do What We Love for Krishna

Some years before Kierkegaard, William Wordsworth had lamented the materialistic mentality he saw rampant in society: “We have given our hearts away, a sordid boon!” As devotees, we’re attempting to withdraw our hearts from materialistic endeavors and apply ourselves to Krishna’s service, and we do this with varying degrees of success. If we find ourselves bored and unhappy, we can take it that we need to try with renewed vigor to find what we love to do and to do that for Krishna’s and His devotees’ pleasure. To try for anything less or to wallow in boredom and unhappiness is unworthy of us. Whoever we are and wherever we are, we are meant for so much more. In a recent opinion column in the New York Times, David Brooks writes, “We are happiest when we have brought our lives to a point, when we have focused attention and will on one thing, wholeheartedly with all our might.” From Srila Prabhupada’s teachings, we know that in order to actually bring us satisfaction, the “one thing” Brooks refers to must be transcendent.

When Srila Prabhupada became aware that some of his followers were having trouble, he wrote to one of them (July, 8, 1972):

Our process of Krishna Consciousness, if it is followed with determination and enthusiasm, automatically it has the effect of fixing us, body, mind and soul, to the Lotus Feet of Lord Krishna, so that all sorts of fluctuations of the material nature, all sorts of difficulties and discrepancies of life are easily withstood. . . . So stop this dreaming state. Try to understand things with the light of your intelligence, and if your are sincere in this way, without a doubt Krishna will give you full facility to understand Him and become freed of the bondage of ignorance.

Nowadays it seems many of the older disciples like yourself are having difficulty. If you do not set the example for the younger students and take the responsibility for instructing them in the right line, how will things go on? Try to always study our books and see our philosophy from different lights of directions, become convinced yourself of this knowledge and without a doubt all of your difficulties of mind will disappear forever and you will see Krishna face-to-face.

The ennui of boredom is a kind of hell. To escape it people sometimes start fights or spend money on diversions that often leave them as unhappy as ever. Prabhupada’s solution to boredom is categorically different. He wants us to use our intelligence to understand Krishna’s teachings from different points of view, to use our talents to please Him and His devotees, and to use our time to remember Him. Done with sincerity and in good company, these simple things will forever save us from the unnatural state of boredom and the unhappiness it brings.