The Gopis’ Example of the Purest Love

The Gopis’ Example of the Purest Love

As the great devotee Bhishma prepares to leave this world, he remembers Lord Krishna’s greatest devotees.

By His Divine Grace A. C. Bhaktivedanta Swami Prabhupada
Lecture given in New York City on May 22, 1973.

Krishna’s greatest devotees are simple village girls who love Him without caring for His Godhood.

“Let my mind be fixed upon Lord Sri Krishna, whose motions and smiles of love attracted the damsels of Vrajadhama [the gopis]. The damsels imitated the characteristic movements of the Lord [after His disappearance from the rasa dance].” – Srimad-Bhagavatam 1.9.40

[Pradyumna Dasa reads Srila Prabhupada’s purport:] “By intense ecstasy in loving service, the damsels of Vrajabhumi attained the qualitative oneness with the Lord by dancing with Him on an equal level, embracing Him in nuptial love, smiling at Him in joke and looking at Him with a loving attitude. The relation of the Lord with Arjuna is undoubtedly praiseworthy by devotees like Bhishmadeva, but the relation of the gopis with the Lord is still more praiseworthy because of their still more purified loving service. By the grace of the Lord, Arjuna was fortunate enough to have the fraternal service of the Lord as chariot driver, but the Lord did not award Arjuna with equal strength. The gopis, however, practically became one with the Lord by attainment of equal footing with the Lord. 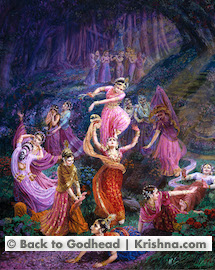 “Bhishma’s aspiration to remember the gopis is a prayer to have their mercy also at the last stage of his life. The Lord is satisfied more when His pure devotees are glorified, and therefore Bhishmadeva has not only glorified the acts of Arjuna, his immediate object of attraction, but also he has remembered the gopis, who were endowed with unrivalled opportunities by rendering loving service to the Lord. The gopis’ equality with the Lord should never be misunderstood to be like the sayujya liberation of the impersonalist. The equality is one of perfect ecstasy, where the differential conception is completely eradicated, for the interests of the lover and the beloved become identical.”

Prabhupada: Lord Chaitanya Mahaprabhu said, ramya kachid upasana vraja-vadhu-vargena ya kalpita: There is no better method of worship than the system invented by the gopis. The gopis’ invention of worshiping Krishna was to remain always Krishna conscious, without material profit. That is the superexcellence of the gopis. They never expected any return from Krishna. That was not their business. “Krishna, we have done so much for You. You cannot give us this benediction?” No, they never asked like that. That is the first-class worship. “Krishna, You take whatever You like from us, but we do not ask anything, neither do we have any need.” This is the gopis’ worship. “We have got everything to give You, and we have no need to ask from You.” 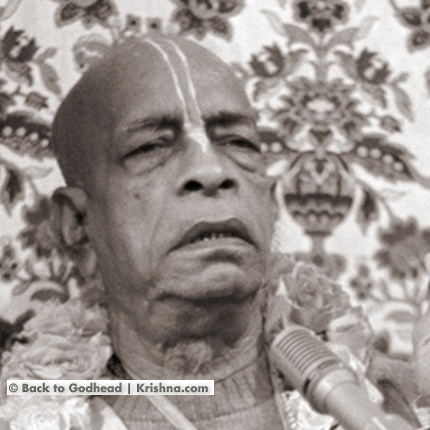 Generally people worship God because they are needy, artah artharthi. Artah means diseased, and artharthi means in need of money. People generally go to church or temple when they are suffering from some ailments or need money, these two classes. Another two classes: jijñasuh, jñani. Jñani means one who is after pure knowledge, and jijñasuh means one who is inquisitive to know what is the nature of God. These two are considered a higher section, but they are not bhaktas. There are many philosophers, and they also talk of God, but they are not bhaktas. But because they are talking of God, they are getting some benefit. If you handle fire, you perceive some warmth automatically.

These four classes are not devotees – artah, artharthi, jñani, and jijñasuh. But because they come to Krishna for some benefit, some way or other they offer their service, because praying is service. There are nine kinds of service:

“Prahlada Maharaja said: Hearing and chanting about the transcendental holy name, form, qualities, paraphernalia and pastimes of Lord Vishnu, remembering them, serving the lotus feet of the Lord, offering the Lord respectful worship with sixteen types of paraphernalia, offering prayers to the Lord, becoming His servant, considering the Lord one’s best friend, and surrendering everything unto Him (in other words, serving Him with the body, mind and words) – these nine processes are accepted as pure devotional service. One who has dedicated his life to the service of Krishna through these nine methods should be understood to be the most learned person, for he has acquired complete knowledge.” (Bhagavatam 7.5.23–24)

Vandanam, offering prayers, is service. But when this service is rendered for some motive, to mitigate suffering, artah artharthi, or to satisfy some inquires, it is not pure devotion.

Not Seeing Krishna as God

If you love somebody there is no consideration what he is – rich man or poor man, educated or uneducated. Love has no such consideration. Similarly, the gopis’ love for Krishna was pure. There was no consideration that Krishna was God; therefore they wanted to dance with Him. No – Krishna wanted to dance with them; therefore they came to Krishna. Krishna is calling by the vibration of His flute in the dead of night. So all these young girls – they are all married, some of them are mothers – immediately left their home. That is described in Srimad-Bhagavatam.

Generally in India for young girls the guardians are the father, the husband, the brother – all male members. They forbade the gopis. “Where are you going?” But the gopis didn’t care. No love for so-called children, no love for home, no love for brother, father, or no respect. Krishna. That is the gopis’ superexcellence.

Practice to Think of Krishna

That is being explained here, and Bhishmadeva, at the point of his death, is relishing it. These things are to be learned. Unless we are practiced to think of Krishna always, how at the time of death we can think of Him? Therefore Kulashekhara says,

“My Lord Krishna, I pray that the swan of my mind may immediately sink down to the stems of the lotus feet of Your Lordship and be locked in their network; otherwise at the time of my final breath, when my throat is choked up with cough, how will it be possible to think of You?” (Mukunda-mala-stotra 33) Maharaja Kulashekhara, a king and a great devotee, is praying to Krishna. “Krishna, this is the opportune time. Now I am healthy. I am quite in good health, so let me die immediately, thinking of You. Because my whole purpose is to think of You, of Your pastimes, at the time of death.”

Generally at the time of death, kapha-vata-pittaih, the whole system becomes disarranged. There is coughing, there is headache, there is some pain. This is the general system. Sometimes these are so intolerable that the man who is going to die cries. The system within the body is so complicated that at any time it can be disarranged, and it becomes a great source of pain.

The arrangement at the time of death becomes so dangerously painful that one leaves this body: “No more.” This is death. This bodily arrangement becomes so painful. For example, one commits suicide when a situation is too painful. One wants rescue by committing suicide. Similarly, when the bodily pains are too severe, then the living entity cannot live in this body. Tyaktva deham: he gives up this body.

We have to give up this body. That we forget. People have become misguided. In our country some astrologer has said that one big politician has become one of two dogs in Scandinavia. Now here, for his previous material body people have erected museums and statues and he is being worshiped by so many methods. But the spirit soul – which was the politician actually, not this body – has taken birth as a dog. This is their mistake. Where the politician has gone and how, what he is doing, they do not know. But they are concerned with the body.

My Guru Maharaja used to say, “One man is drowning, and a brave man comes – ‘I’ll save him.’ He jumps into the water and brings back the coat and shirt: ‘Now this man is saved.’” What will people say? “What a nonsense he is. He has brought his coat and shirt, and the man is saved?” Similarly, these rascals are dealing with the coat and shirt of the living entity, but they have no knowledge in the university or anywhere else where the soul has gone. These rascals have no knowledge. They are simply concerned with this external body.

Education in the Gita

Ninety-nine percent of the population are interested in this bodily concept of life. Perhaps we are the only institution in the world that is teaching that you are not this body. This is the wonder of the Krishna consciousness movement. We are the only institution throughout the whole world teaching people, “My dear sir, you are not this body. You are different from the body, and after death you get another body.”

“As the embodied soul continuously passes, in this body, from boyhood to youth to old age, the soul similarly passes into another body at death. A sober person is not bewildered by such a change.” Simple education in the Bhagavad-gita (2.13), but they do not understand. There are big, big scholars, but they are rascals, all rascals. Our difficulty is that these rascals are going on as scholars. Dehatma-buddhih. Their life is the bodily concept of life, and they are passing as scientists, scholars, leaders, politicians. And they are leading. Andha yathandhair. They are blind, and they are leading us, so we are also put into difficulty.

Only this Krishna consciousness movement can save the human civilization and get people raised to the platform of the gopis. We have got such a nice thing – these gopis’ unalloyed Krishna love. That is wanted.

He wears yellow garments and a garland of forest flowers. He is decorated with various jewels, and He is a great reservoir of the nectar of many transcendental pastimes.

He has long, curling hair, and He is anointed with many fragrant scents. His handsome crown is decorated with many different flowers. His handsome forehead is splendidly decorated with tilaka markings and curling locks of hair. The playful movements of His raised, dark eyebrows enchant the hearts of the gopis. His rolling eyes are as splendid as red and blue lotus flowers. The tip of His nose is as handsome as the beak of Garuda, the king of birds.

His charming ears and cheeks are decorated with earrings made of various jewels. His handsome lotus face is as splendid as millions of moons. He speaks many charming jokes, and His chin is exquisitely handsome.

His handsome, smooth neck bends charmingly. It is decorated with a necklace of pearls, and its beauty enchants the residents of the three planetary systems.

Decorated with a necklace of pearls and with the Kaustubha gem, which shines like lightning, Krishna’s handsome chest longs to enjoy the company of the beautiful gopis.

Krishna’s charming abdomen is the pastime abode of handsomeness. His nectarean back seems to long for the playful touch of the beautiful gopis. The nectarean lotus flower that is Lord Krishna’s hips bewilders the demigod Cupid. Krishna’s thighs are like two beautiful plantain trees that charm the hearts of all women. Krishna’s knees are very splendid, charming, and handsome. His charming lotus feet are decorated with jeweled ankle bells.

Krishna’s feet have the luster of roses, and they are decorated with various auspicious markings, such as the markings of the disc, half-moon, octagon, triangle, barleycorn, sky, parasol, waterpot, conchshell, cow’s hoofprint, swastika, rod for controlling elephants, lotus flower, bow, and jambu fruit.

Krishna’s handsome lotus feet are like two oceans filled with the happiness of pure love. His reddish toes are decorated with the row of full moons that are His toenails.