The Glories of Sridhara Swami: A Quick Comment on a Crafty Commentator

The Glories of Sridhara Swami: A Quick Comment on a Crafty Commentator

Was the well-known Bhagavatam commentator, revered even by Chaitanya Mahaprabhu, a Mayavadi? 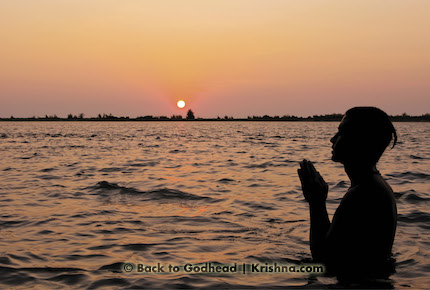 When Lord Krishna manifested His eternal pastimes on earth some five thousand years ago, He often acted as a transcendental trickster. He was lovingly known as a mischievous butter thief, for example, and playfully stole the young gopis’ clothes. Later, He even employed backhanded stratagems to help His devotees win in battle. Similarly, in His appearance as Sri Chaitanya Mahaprabhu, some five hundred years ago, He retained some of His tricky ways. The famous example is His sannyasa (renunciant) initiation. The young Nimai Pandita (Mahaprabhu’s name in His youth) played a trick on Keshava Bharati, His sannyasa guru. He said to him, “I had a dream in which a mantra appeared to Me. Let Me tell you this mantra, and you can say whether it’s correct.” He whispered the mantra to Keshava Bharati, and in this way He initiated him as a disciple, as opposed to the other way around. 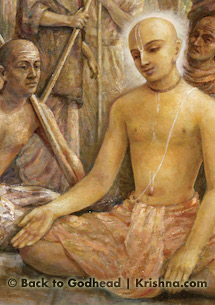 Indeed, the entire sannyasa initiation was a trick: Keshava Bharati was a sannyasi of the Mayavadi school, which deemphasizes the personhood of God. Mahaprabhu fought against this conception, saying that the ultimate concept in divinity is the Supreme Personality of Godhead. Yet in accepting initiation from Bharati, Mahaprabhu would win the respect and attention of His contemporaries, who generally believed Mayavadi sannyasa to be the pinnacle of spiritual accomplishment.

The renowned fourteenth-century1 commentator Sridhara Swami employed a similar tactic. Jiva Goswami (c. sixteenth century) says in the Tattva-sandarbha (Anuccheda 27) that Sridhara was a pure Vaishnava who incorporated Advaita or Mayavadi notions into his work with a specific agenda: to allure his readers to the path of Vaishnavism. Baladeva Vidyabhushana (c. 1700–1793 CE) confirms this idea in his commentary on Tattva-sandarbha, offering an explanation: Sridhara was actually a Vaishnava “because his commentaries contain remarks to the effect that the form, attributes, manifestations, and abodes of bhagavat (God) are eternal, as are the bodies of His attendants, and that the devotees of bhagavat belong to the highest class and are headed towards liberation.”2 Sridhara’s apparently Advaitin statements, Baladeva adds, are like “the meat on the end of a hook, meant to lure fish.”3 Thus the great commentator engaged in a form of subterfuge that Sri Chaitanya would soon follow: aligning with an esteemed if misdirected tradition to edify it.

Little is known about Sridhara Swami’s life.4 His lucid commentaries on celebrated Vaishnava texts are the gems for which he is remembered.

He was probably born in a village just outside Remuna, a small town in the Baleshwar (Balasore) district of Odisha.5 According to Nabhaji’s Bhaktamala, Sridhara Swami was married as a youth. He had one child, who became a noted local scholar. Sridhara was inclined to renunciation early in life, and he took sannyasa, leading a life of study and spiritual practice. For many years he acted as abbot (mahant) of Govardhana Matha in Jagannatha Puri, one of the four monasteries founded by Adi Shankara in the eighth century CE. This is where he developed a reputation as a leading Advaitin philosopher.

Sridhara Swami’s guru, Paramananda, is not well known, though his name is consistently found in the historical record. Indeed, at the beginning of Sridhara Swami’s Bhagavatam commentary, he offers obeisance to a sadhu of this name, affirming this glorious personality as his spiritual master (yat kripa tam aham vande paramananda-madhavam).

Sridhara Swami is most well-known for his commentary on the Srimad-Bhagavatam, called the Bhavarthadipika (“a light that illuminates the intended or original meaning”). As the title suggests, his intention was not to supply a creative interpretation of the text but rather to convey its actual meaning. When His Divine Grace A. C. Bhaktivedanta Swami Prabhupada published his own edition of the Bhagavad-gita and titled it “As It Is,” he was pointing in a similar direction – as the then current representative of a time-honored disciplic lineage, he was conveying the original intent of the Gita’s essential message, passed down from teacher to disciple, offering translation and commentary that communicated Lord Krishna’s original message or meaning.

Sridhara Swami’s commentaries on the Bhagavad-gita (Subodhini-tika) and the Vishnu Purana (Atma-prakashika), although less popular than his Bhagavatam commentary, are still highly revered and remain in print to this day.

Although a renunciate of a Sankarite order, he was (and is) revered by Vaishnavas as commentator par excellence on the Bhagavata Purana. So great was Sridhara’s influence that his commentary became the measuring stick for those that followed him, and his interpretations became virtually synonymous with the meaning of the Purana. . . . Of all the followers of the Bhagavata, perhaps the ones that hold Sridhara in the highest esteem are Chaitanya Vaishnavas.6

Sridhara Swami’s preeminence is partly due to the fact that he was the earliest to expound on the entire Bhagavatam. Prabhupada refers to him as “the original commentator.”7 The sheer brilliance of Sridhara Swami’s insight, and the fact that he was so highly appreciated by Sri Chaitanya Himself, allows him to stand alone in the history of superlative Bhagavatam explication.

The story of how Sri Chaitanya came to praise Sridhara Swami is related in Krishnadasa Kaviraja Goswami’s early-seventeen-century text Sri Chaitanya-charitamrita (Madhya and Antya): Vallabha Bhatta (later known as Vallabhacharya) met with Chaitanya Mahaprabhu at Jagannatha Puri and ventured to share his own Bhagavata elucidation with Him, saying that his work surpassed even that of Sridhara Swami. Vallabha was proud of his writing, but Sri Chaitanya scolded him, saying that a Vaishnava should be humble and merely follow in the footsteps of his predecessors, not try to surpass them. The Lord told him that his pride in thinking himself superior to Sridhara Swami was not at all befitting a Vaishnava. Mahaprabhu in fact severely criticized Vallabha’s mood, for He considered the very notion of outdoing Sridhara Swami to be blasphemy.

Vallabhacharya humbly accepted Chaitanya Mahaprabhu’s admonition, understanding that it was for his benefit.

Vallabhacharya’s initial attitude toward Sridhara Swami’s commentary becomes even more poignant when we consider, as we will now see, that they were affiliated with the same lineage: the Vishnuswami sampradaya.

A Personalist with a Mission

Prabhupada does not stand alone. He is echoing the teaching of his own guru, Srila Bhaktisiddhanta Sarasvati Thakura, as preserved in a lecture from 1925:

By research and study of the different cultural heritages of all the sampradayas, we learn that the Vishnuswami Sampradaya is ancient. . . . [T]he Vishnuswamis were Tridandi Vaishnava sannyasis who bore the ten names as well as the 108 names of the sannyasis. . . . During the medieval age Sridhara Swamipada, who was a member of the Sri Vishnuswami Sampradaya, was found to be a worshiper of Nrisimhadeva and, from the external point of view, on the path of reverence. The worship of Krishna was also prominent in his heart. . . . Sridhara Swamipada could never have been a Kevaladvaitavadi. Rather, he was a Shuddhadvaitavadi. According to the Shuddhadvaitavada philosophy, the living beings are parts of the Absolute Truth, maya is the energy of the Absolute Truth, and the world is the effect of the Absolute Truth. Therefore the living beings, maya, and the material world are considered part of the Absolute Truth and not separate from Him. . . . Had Sridhara Swamipada become a Kevaladvaitavadi or a Mayavadi, Sriman Mahaprabhu would not have reprimanded Sri Vallabha Bhattaji or accepted Sridhara Swamipada as Jagat-guru, nor would He have taught the acharyas and everyone else to explain Srimad-Bhagavatam following in Sridhara Swami’s footsteps. Had Sridhara Swamipada become a Kevaladvaitavadi, Sri Jiva Goswamipada would not have called him bhaktyeka rakshaka, “the only protector of devotional service.” Sriman Mahaprabhu, Sri Jiva Prabhu, and the other Vaishnava acharyas consider Mayavadis destroyers of devotional service, not protectors of devotional service.8

Thus Sridhara Swami, while historically aligned with Mayavadi teachings because of his prominent position at the Govardhana Matha in Puri, was in actuality a member of the Vishnuswami lineage, which has ancient roots as one of the four original streams of Vaishnava thought: the Rudra sampradaya.9 This sampradaya has two main divisions: the Vishnuswamis, or the followers of Vishnuswami, and the Vallabhas, or the Pushtimarga sect, founded by Vallabha. Today the lineage is mainly carried on by Vallabha’s descendants and their followers.

The philosophy identified with both Vishnuswami and Vallabha is known as shuddhadvaita, or “purified monism,” a system of thought closer to Advaita Vedanta than any Vaishnava school. Suddhadvaita-vadis claim there is essentially no difference between God and the living beings (like fire and its sparks). Yet unlike Shankara’s Mayavadi conception, Vallabha asserts that God is the whole and the individual is the part. The individual soul is thus not the Supreme Lord. While this is similar to other forms of Vaishnava philosophy, its emphasis on the sameness of God and the living entity tends to make it more amenable to Advaitic thought. It makes sense, then, that Sridhara Swami would affiliate with Vishnuswami’s lineage, giving him greater facility to understand Advaitin perspectives and to communicate with Advaitins in Vaishnava language.

The Question of Allegiance

While in his writings Sridhara Swami consistently acknowledged the preeminence of Shankara – whom he termed “the bhashyakara,” or “the commentator” – his overall philosophical stance was another matter. His palpable emphasis on bhakti, or devotion to Krishna, which permeates his writings, and his surprising lack of emphasis on Shankara’s specific Mayavadi perspective, raises for many a crucial question about his theological allegiance.

As if in answer to this question, by the fifteenth century, soon after Sridhara’s time, a subtle transformation in the Advaita tradition had taken place, with a discernible trajectory arching away from radical monism and towards krishna-bhakti. In fact, in the judgement of B. N. K. Sharma, one of the most renowned Madhva scholars of the twentieth century, Sridhara is “frankly dualistic in his interpretations, even where a monistic one could be thought of. . . . He is even anti-monistic at times.”10 In other words, Sridhara Swami is perceptibly a Vaishnava. In fact, in the firmament of devotion, he arises as among the best of all Vaishnavas.

His tactic worked. As evidence, Vaishnavas favor a famous centuries’-old story that supports the tradition’s philosophical conclusions: Many generations ago, the Advaitin community in Benares, fearing that Sridhara Swami’s patent bhakti leanings threatened foundational Mayavadi tenets, placed his written work before the Vishnu deity in the temple11 so that the Lord Himself, best of all judges, could adjudicate. Were the Swami’s teachings heterodox, or not? In response, the tradition avers that Lord Vishnu did indeed appear before them, and His declaration is memorable: “I know, Suka knows, and Vyasa may or may not know, [but] Sridhara knows all because of Nrisimha’s mercy.”12 Sridhara Swami was famously a devotee of the Nrisimha incarnation of Krishna, as can be discerned from the invocation verses and many others of his Bhagavatam commentary.

Sri Chaitanya Mahaprabhu, the Supreme Lord Himself, offers a concluding thought. He says that Sridhara Swami is jagat-guru, the guru of the entire world.13 Clearly, this is no small praise.