How should we prepare for that final moment that will arrive for each of us?

Once we accept the inevitability of our body’s end, what should we do next?

Death. We don’t like to talk about death. In fact, the topic is pretty much taboo in all contemporary societies. Why? Because death is, well, so final. It’s the end, and most people don’t know what comes after “the end.” Consequently, death is a fearful contemplation. We don’t know what happens after death. Or we wonder if anything happens. 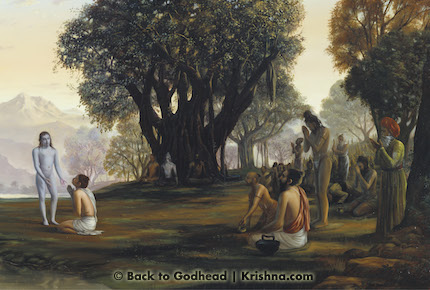 Another problem with death is that it is often accompanied by disease or pain. Even if the dying person does not experience physical pain, family and friends endure the emotional pain of separation or the unreasonable feeling of being abandoned by the beloved dying person.

One famous American, Steve Jobs, cofounder of Apple computers, made an interesting observation: “Even people who want to go to heaven don’t want to die to get there. And yet death is the destination we all share. No one has ever escaped it, and that is how it should be. . . . [Death] is life’s change agent. It clears out the old to make way for the new.”

Mr. Jobs observed that many religious people don’t appreciate death even though their scriptures often indicate that death is the only door to heaven.

The Vedas explain that the Supreme Lord created the material world and that everything created has a beginning and an end. People who have lived righteous lives on earth go to a heavenly planet in the material world after death, residing for thousands of years in delightful circumstances. Yet at the end of their allotted time, after the credit of their pious activities has been used up, they have to fall back down to earth.In contrast, Vaikuntha, the eternal spiritual world described in the Vedas, is full of eternal, blissful, and fully conscious persons who interact with God purely, without any defects or deficiencies. Persons who have become completely free of all envy and other unwanted material qualities through practicing bhakti-yoga (devotional service), who have developed pure, uncontaminated love for God, go to the spiritual world, never to return to the material creation.

According to the ancient Vedic scriptures, we are all spiritual beings and death is a consequence of our existence in the material world, right along with birth, old age, and disease. These miseries are all related to our body, which is not our true self. They are the real fundamental problems in this mundane world. And no matter what, they are inevitable. “Nothing is sure but death and taxes,” we’ve often heard. Cheaters may avoid taxes, however, but no one avoids death.

Lord Krishna says, “One who has taken his birth is sure to die, and after death one is sure to take birth again.” (Gita 2.27)

Due to its ubiquitous place in our world, death is frequently imagined as a personified force, sometimes known as the Grim Reaper. Death means the end of everything material we’ve accumulated, the complete and everlasting disconnection from “our” money, house, career, position, clothes, education, and family.

Actually, from the time we are born our bodies are changing, getting ever closer to death. In that sense we start dying when we’re born. I recently heard someone say, “Every day we get closer to the casket.”

We start with the body of a baby, then move on to that of a small child, a youth, a mature adult, and finally an old person. Our body is changing at every moment, and the final change, the ultimate transformation for the present body, is death.

Repeating a point made throughout the Vedic scriptures, Lord Krishna tells us in the Bhagavad-gita that after death we have to accept another body. So actually I (the person, the living force in the body) don’t die when my body dies. “For the soul there is neither birth nor death at any time. He has not come into being, does not come into being, and will not come into being. He is unborn, eternal, ever-existing and primeval. He is not slain when the body is slain.” (Gita 2.20) The person, the living force, continues on in another body. Thus there is a difference between our body (the material vehicle we inhabit) and our self (the soul, or living force).

Yet death does not have to be fearful or intimidating. And for some rare persons it is not. For example, five thousand years ago the emperor of the world, Maharaja Parikshit, learned that he had only seven days to live, due to a curse. Instead of resisting and lamenting, he accepted this as the divine arrangement of the Supreme Lord and went to the bank of the sacred Ganges River to seek out wisdom from spiritually advanced sages. His urgent question – “What is the duty of a person about to die?” – aroused interest from saintly people all over the universe, and they arrived by the hundreds to witness one of the greatest discourses of all time.

The reality is we are all about to die. But unlike Maharaja Parikshit, we generally don’t have the luxury of knowing when. It could be tomorrow, five years from now, or fifty years from now. It could be inside our residence or outside, during the day or night, while we are traveling or resting. Every human being, then, should be concerned about the emperor’s question: “What is the duty of a person about to die?”

The old aphorism “When the student is ready, the teacher will appear” proved apt in Maharaja Parikshit’s case. Providence arranged that the great devotee Shukadeva Goswami arrived simultaneously at the bank of the sacred Ganges River. Upon his arrival, all the assembled sages conceded that Shukadeva Goswami was the authority most qualified to answer the question. And his answer is timely and relevant for us all. His response is meant for every thoughtful human being: “O King, it is therefore essential that every human being hear about, glorify, and remember the Supreme Lord, the Personality of Godhead, always and everywhere.” (Bhagavatam 2.2.36)

Srila Prabhupada writes in The Nectar of Devotion, chapter two: “So Shukadeva Goswami has recommended to Parikshit Maharaja that in order to be fearless of death, one has to hear about and chant about and remember the Supreme Personality of Godhead, Krishna, by all means. He also mentions that the Supreme Personality of Godhead is sarvatma. Sarvatma means ‘the Supersoul of everyone.’ Krishna is also mentioned as ishvara, the supreme controller who is situated in everyone’s heart. Therefore, if some way or other we become attached to Krishna, He will make us free from all danger.”

The Duty: To Live in Krishna Consciousness

It has been said that if you live each day as if it was your last, someday you’ll most certainly be right.

Srila Prabhupada exemplified how to live and how to die. He died the same way he lived – in pure Krishna consciousness. In every situation, he showed us how to hear about, glorify, and remember the Supreme Lord. Whether he was eating, walking, speaking to large or small crowds, writing books on spiritual science, guiding his young disciples, opening temples and schools, or traveling – until his last breath the founder-acharya of ISKCON showed us how to live and how to die. Many of his disciples, including such noteworthy disciples as Yamuna Devi and Bhaktitirtha Swami, followed in his footsteps, being contemporary examples of how to live fully in Krishna consciousness until the end of the body.

To hear about God, chant His names, and remember Him is to be in awareness of Him at all times. It is recognition of our natural position as His eternal servant, and it includes carrying out the responsibilities of that position. It is also the realization that forgetfulness of God is unnatural and painful.

Therefore the duty of a person about to die – and that person is every one of us – is to live in full consciousness of Krishna, the Supreme Lord, by always hearing about Him, chanting His names, and remembering Him.