The Cycles Shall Prevail

The Cycles Shall Prevail

We’re tiny creatures rotating on the wheel of time, but we can bring the miserable ride to an end.

The reality of our present situation is that our bodies and even the universe are continually subject to creation and annihilation. 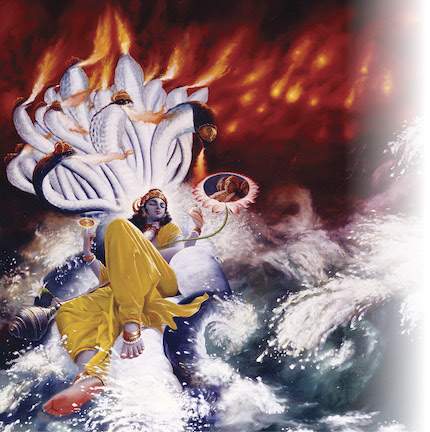 A few miles north of Mumbai, in an area called Juhu, the Hare Krishna movement has a large temple situated near the popular wide and flat Juhu Beach. Srila Prabhupada went for many morning walks on this beach. Walking on that same sand before sunrise recently, remembering the energetic and long walks Srila Prabhupada so often took there, I noticed how the tide daily erases countless sandy footprints.

This observation made me think that just as the incoming tide eradicates numberless imprints, similarly humankind’s many attempts to make this world a comfortable, pleasure-filled place will be eradicated by time’s cycles. On the pages of Srimad-Bhagavatam we hear the earth personified reflecting on the destruction of those who would dominate her:

Seeing the kings of this earth busy trying to conquer her, the earth herself laughed. She said: “Just see how these kings, who are actually playthings in the hands of death, are desiring to conquer me. Such kings . . . possessed great powers of control over others, were all full of knowledge, heroic, all-conquering and unconquerable. Nevertheless, although they lived their lives intensely trying to possess me, these kings were subject to the passage of time, which reduced them all to mere historical accounts. None of them could permanently establish their rule.” (Bhagavatam 12.3.1, 11–13)

As the moon waxes and wanes, as the sun rises and sets, as the seasons turn, as death follows birth, similarly our bodies (and indeed all the material planets and universes) are subject to cycles of creation and annihilation.

From the Bhagavad-gita (8.18–19) we hear that “At the beginning of Brahma’s day, all living entities become manifest from the unmanifest state, and thereafter, when the night falls, they are merged into the unmanifest again. Again and again, when Brahma’s day arrives, all living entities come into being, and with the arrival of Brahma’s night they are helplessly annihilated.” Beginning with Brahma, all created beings constantly undergo the continuous processes of birth and death, creation and annihilation, as does the entire material creation.

There are two types of dissolution of the manifested cosmos. At the end of every 8,640,000,000 solar years, when Brahma, the lord of one particular universe, goes to sleep, there is one annihilation. And at the end of Lord Brahma’s life, which takes place at the end of Brahma’s one hundred years of age, in our calculation at the end of 8,640,000,000 x 30 x 12 x 100 solar years, there is complete annihilation of the entire universe, and in both the periods both the material energy, called the mahat-tattva, and the marginal energy, called the jiva-tattva [the spirit souls], merge in the person of the Supreme Lord. The living beings remain asleep within the body of the Lord until there is another creation of the material world, and that is the way of the creation, maintenance and annihilation of the material manifestation.” (Bhagavatam 1.10.21, Purport)

In his prayers to Krishna, Brahma himself says, “Let me offer my respectful obeisances unto the original Personality of Godhead, whose plenary portion is Maha-Vishnu. All the Brahmas, the heads of the universes, live only for the period of His exhaling, after the universes are generated from the pores of His transcendental body.” (Brahma-samhita 5.48)

Maha-Vishnu, a transcendental expansion of Krishna, is lying on the Causal Ocean. By His breathing all the universes are generated in seed form. As the seeds of a tree develop into numberless trees, so millions and trillions of universes in their seedling form come from the bodily pores of Maha-Vishnu and gradually develop into gigantic forms with innumerable planets within each one. That Maha-Vishnu is a part of a plenary expansion of Krishna. At the time of annihilation the whole creation merges within the body of Maha-Vishnu, and when it is again time for creation it again emanates from His body.

Brahma addresses Krishna: “What is Your glory? Unlimited universes pass through the pores of Your body just as particles of dust pass through the openings of a screened window.” (Bhagavatam 10.14.11)

The original creator and controller of the repeated creations is Krishna. Before He sets His creative energy in action, He is in His abode. And after He annihilates the material universes, He remains unchanged. He exists separately, apart from His creative and destructive energies. Thus He is not a product of material energy, for His body is completely spiritual; there is no difference between His body and Himself. He is the ultimate cause of all causes.

By attentively hearing how Krishna creates and annihilates the universes, we can understand that within the vast scope of the total material manifestation our impact on this temporary planet is insignificant. Perhaps a strange comfort can be derived from the fact that no matter how much pollution we pour into the skies, rivers, oceans, and land; no matter what weapons of minor and mass destruction we release against each other; no matter how much suffering we experience from a myriad of causes; and no matter how disappointing our leaders, the cycles of creation and annihilation will continue unabated and unaffected. These enormous natural cycles will, in the final analysis, prevail over the material creation just as the tide prevails over a messy beach.

The Rich Not Exempt

Recently I met three brothers who own a multistory mansion on a large plot of land at the north end of Juhu Beach. Later, when I saw them walking on the beach without their multitude of servants, fleet of chauffeured cars, and endless accouterments, I noticed that they blended in with everyone else. The sun and sand, the vast sky and sea are like thoughtful sages in that, regardless of one’s social standing, they view all of us equally. On speaking with these brothers, I realized that, like me, they find solace in Krishna’s elements: the spaciousness, the rhythm of the gentle surf, the caress of sea breezes, the welcoming firm sand. And like me, they grumble about the trash-strewn beach.

These brothers, among the richest people in India, walk daily. Just like the less well-off of their generation, they have aging bodies that they’re obliged to exercise (no one else can do that for them!), for the effects of time spare no one: “All material entities undergo transformation and are constantly and swiftly eroded by the mighty currents of time.” (Bhagavatam 12.4.36) Although exercise can temper time’s ravages for a few decades, even staggering wealth cannot stop them. “As an animal tamer tames animals according to his will, time also adjusts things according to its own will. No one can supersede the arrangement made by supreme time.” (Krishna, Chapter 51)

Our human form of life is meant for ending this continuous change of bodies and thereby attaining a place in the spiritual sky, where everything is eternal, blissful, and full of knowledge. We can accomplish this by living a genuine spiritual life, following Krishna’s teachings.  And success in this endeavor is, according to Srimad-Bhagavatam (12.4.34), the “ultimate annihilation of material existence.”

In other words, it is possible, by Krishna’s grace, to put an end to all the material cycles that otherwise prevail upon us.