A life of Krishna consciousness provides plenty of freedom to satisfy our inspiration to create.

Our creative urge, born of our being part of Krishna, will be most fulfilling when connected with His purposes. 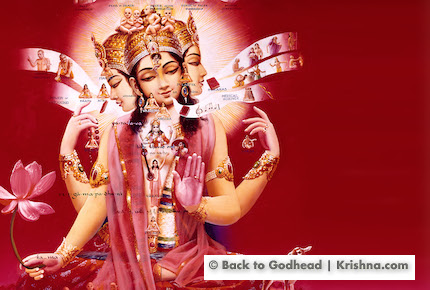 Krishna, the Supreme Personality of Godhead, is the original creator. In the Bhagavad-gita (10.8) He says,

“I am the source of all spiritual and material worlds. Everything emanates from Me.” The invocation verse of Sri Ishopanishad says that because He is perfect and complete, His creation, taken as a whole, is also perfect and complete. But one may question, “How is that? The world appears to be rife with imperfections and insufficiencies.” The answer lies in the purpose of the creation.

The creation is to give a chance to us, the spirit souls (jivas), to return to Krishna.

In Srila Prabhupada’s words, “Even for our manufacturing enterprises, we require so many raw materials like metal, sulphur, mercury, manganese, and so many essentials – all of which are supplied by the agents of the Lord, with the purpose that we should make proper use of them to keep ourselves fit and healthy for the purpose of self-realization, leading to the ultimate goal of life, namely, liberation from the material struggle for existence.” (Gita 3.12, Purport)

A second purpose of Krishna’s creating the material world is to give us, the jivas, an opportunity to try to enjoy ourselves. This is not what Krishna Himself wants for us or what He ultimately wants His creation used for, but it’s what we want to use it for. Krishna kindly facilitates our desire.

If we forget the purpose of human life and simply take supplies from the agents of the Lord for sense gratification and become more and more entangled in material existence, which is not the purpose of creation, certainly we become thieves, and therefore we are punished by the laws of material nature. A society of thieves can never be happy, because they have no aim in life. The gross materialist thieves have no ultimate goal of life. They are simply directed to sense gratification. (Gita 3.12, Purport)

Krishna’s material creation is perfectly suited to both allow us to reunite with Him and to allow us to try to enjoy ourselves apart from Him.

The First Created Being

Brahma is the first being Krishna creates within this and every material universe. Brahma is born into darkness and doesn’t know who he is, where he is, or what he’s supposed to be doing. At first he searches here and there to find answers to these questions, but makes no progress. “Lord Brahma, the first spiritual master, supreme in the universe, could not trace out the source of his lotus seat, and while thinking of creating the material world, he could not understand the proper direction for such creative work, nor could he find out the process for such creation.” (Bhagavatam 2.9.5)

After receiving a hint from the Lord that he should practice penance, Brahma meditated with full faith and sincerity for a thousand celestial years, at the end of which he said, “I am now engaged in manifesting His [Krishna’s] diverse energies in the form of the cosmic manifestation. I therefore pray that in the course of my material activities I may not be deviated from the vibration of the Vedic hymns.” (Bhagavatam 3.9.24) And Krishna reciprocated with Brahma. Srila Prabhupada explains:

The mercy the Lord bestows upon a particular person engaged in executing the responsible work entrusted unto him is beyond imagination. But His mercy is received due to our penance and perseverance in executing devotional service. Brahma was entrusted with the work of creating the planetary systems. The Lord instructed him that when he meditated he would very easily know where and how the planetary systems must be arranged. The directions were to come from within, and there was no necessity for anxiety in that task. (Bhagavatam 3.9.30, Purport)

However, Brahma’s creation of our universe, an incredibly complex, diverse, and gigantic task, did not go completely smoothly. For example, at one point Brahma had to turn to the Lord to protect him from his own created beings who were about to attack him: “My Lord, please protect me from these sinful demons, who were created by me under Your order.” (Bhagavatam 3.20.26) At another point, Brahma created four sons, the Kumaras, whom he wanted to help populate the universe, but they refused because they wanted to remain celibate and focused only on freeing themselves from material bondage. At this, Brahma became angry, and although he tried to control his anger, it came out from between his eyebrows as Rudra, also known as Shiva. Brahma asked Rudra to increase the population, and Rudra obeyed, but later Rudra’s unlimited numbers of sons and grandsons assembled and tried to devour the universe. Seeing this, Brahma himself became afraid and told Rudra, “O best among the demigods, there is no need for you to generate living entities of this nature. They have begun to devastate everything on all sides with the fiery flames from their eyes, and they have even attacked me. My dear son, you had better situate yourself in penance, which is auspicious for all living entities and which will bring all benediction upon you.” (Bhagavatam 3.12.17­–18) Fortunately, Rudra agreed and left for the forest to perform penances, and Brahma was able to continue creating.

Krishna creates, and we jivas, as integral parts of Krishna, also have the desire to create, to express our heart in an aesthetically pleasing way. As Krishna’s creation has its purposes and is finely suited to fulfilling those, our creations should be attuned to Krishna’s purposes to be fulfilling to ourselves and pleasing to guru and Krishna. It’s not that anything goes. Srila Prabhupada wrote, “Yesterday I have been in a Unitarian Church and there I saw two pictures of only logs and bamboos, and I was explained by our great artist Govinda dasi that these are modern abstract arts. Anyway I couldn’t see in them anything but a combination of logs and bamboos. There was nothing to impel my Krishna Consciousness.” (Letter to Jadurani Dasi, April 8, 1968)

By the standards of Srimad-Bhagavatam it’s better for us to create something flawed for Krishna’s pleasure than to create something perfect that’s not Krishna-centered. “Transcendental literatures, even though imperfectly composed, are heard, sung and accepted by purified men who are thoroughly honest.” (Bhagavatam 1.5.11) Conversely, “Those words which do not describe the glories of the Lord, who alone can sanctify the atmosphere of the whole universe, are considered by saintly persons to be like unto a place of pilgrimage for crows.” (Bhagavatam 1.5.10)

In other words, devotees are encouraged to present Krishna consciousness in fresh and novel ways, but they are discouraged from presenting anything that is not grounded in the scriptures. Srila Prabhupada explains it this way:

One must have full confidence in the previous acharya, and at the same time one must realize the subject matter so nicely that he can present the matter for the particular circumstances in a suitable manner. The original purpose of the text must be maintained. No obscure meaning should be screwed out of it, yet it should be presented in an interesting manner for the understanding of the audience. This is called realization. (Bhagavatam 1.4.1, Purport)

Just like in law court two lawyers are fighting, but the lawyer who is giving evidences from the law book, he is accepted by the judge. And therefore, generally you will find, whenever we speak something, we give evidence from the shastra in Sanskrit, in all our books. That is the way of proving that whatever I am speaking, it is fact. (Room Conversation, April 7, 1972, Melbourne)

In His teachings to Sanatana Goswami, Sri Chaitanya Mahaprabhu pointed out that some unscrupulous persons make up stories that are not in accord with scriptural conclusions. Srila Krishnadasa Kaviraja Goswami writes: “Illusory stories opposed to the conclusions of Krishna consciousness concern the destruction of the Yadu dynasty, Krishna’s disappearance, the story that Krishna and Balarama arise from a black hair and a white hair of Kshirodakashayi Vishnu, and the story about the kidnapping of the queens. Sri Chaitanya Mahaprabhu explained to Sanatana Goswami the proper conclusions of these stories.” (Chaitanya-charitamrita, Madhya 23.117–118)

To see how Srila Prabhupada applied these principles practically, we can study how he guided the many artists who illustrated his books. To three of them he wrote, “The best thing will be that you paint pictures to your best discretion and in controversial points you can write to me and I will send instructions. All of you are expert painters, so your mutual decision for painting a picture is more valuable than my suggestion. The descriptions are already there, given in the book, so there is no difficulty to take out the points and prepare a sketch.” (Letter to Jadurani Dasi, Bharadvaja Dasa, and Muralidhara Dasa, June 4, 1970)

Once in a while, when an artist created a painting without following scriptural descriptions, Srila Prabhupada would correct that person, sometimes strongly. On one such occasion he wrote, “Krishna and Balarama fighting as bulls is completely rejected by me. It is not good. You have made it demoniac. Make Them as they are themselves, as boys fighting. Never show like this. Everything is there in the Krishna book. Don’t imagine.” (Letter to Jadurani Dasi, August 9, 1974)

The Sum and Substance

Many of us have a deep-rooted desire to create, whether through writing, art, or some other endeavor. This is natural because we are part of Krishna, the supreme creator, and we share His qualities, including the creative urge. This urge is misused, however, if we don’t keep our creations within scriptural boundaries. This is not repression of our creativity, but freedom for it. One asks, freedom through boundaries? Yes. In the Bhagavad-gita (2.64) Krishna explains that “a person free from all attachment and aversion and able to control his senses through regulative principles of freedom can obtain the complete mercy of the Lord.” By controlling our senses through following regulative principles, we free our minds to think of Krishna. Similarly, by following scriptural guidelines when we create, we can please the spiritual master and Krishna and thus be gradually released from the grip of material illusion. Otherwise, if we allow our creative impulses to be unbounded, we may become well known for our creations but we will also be further entrenched in material consciousness.

Earlier I quoted a letter to Jadurani Dasi in which Srila Prabhupada criticized abstract modern art as having “nothing to impel my Krishna Consciousness.” He continued, “So, if you want to be a great artist in that way, I will pray that Krishna may save you. . . . We are meant for satisfying Krishna, not anybody’s senses. That should be the principle of our life.”