The prayers of this exceptional queen are saturated with both profound philosophy and deep spiritual love. 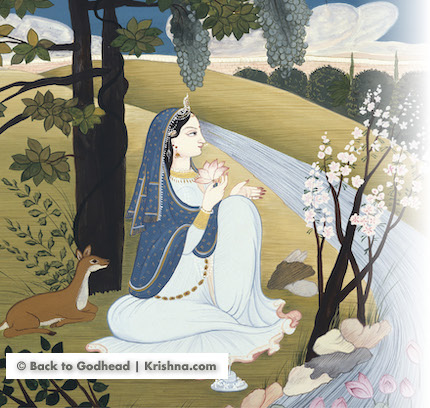 Srila Prabhupada was very fond of the prayers of Queen Kunti, the mother of the Pandavas and a great devotee of Lord Krishna. They appear in the First Canto, chapter eight, of Srimad-Bhagavatam, which he translated and published in India in 1962 with his commentary. Ten years later, having ventured to America, he offered a series of lectures on the prayers. These were compiled and published by his disciples in a book titled Teachings of Queen Kunti. It is a candid, soul-searching book because it lays bare the anomalies of the social and industrial matrix that Srila Prabhupada observed in America, while at the same time it gives us a bird’s-eye view into the determined spiritual success of a virtuous queen.

Queen Kunti was situated in the middle of a bitter and violent struggle between her beloved sons, her nephews, and their many seniors and allies. Her plight gave rise to her beautiful prayers, among the most philosophical and powerful expressions of love of God that can be found in all of the world’s literatures.

At the time of the prayers, Krishna has assisted Kunti and her sons through many perils, but now He is about to leave them to return to His earthly home in Dwaraka. Lord Krishna incarnated as a prince in the dynasty Yadu dynasty, and He happens to be Kunti’s nephew. When He respectfully offers His farewell to her, touching her feet out of respect, Kunti, knowing His confidential identity as the Supreme Personality of Godhead, offers her personal glorification of Him.

“My respectful obeisances are unto You, O Lord, whose abdomen is marked with a depression like a lotus flower, who are always decorated with garlands of lotus flowers, whose glance is as cool as the lotus, and whose feet are engraved with lotuses.” (Bhagavatam 1.8.22)

The lotus symbolizes transcendence because in all of its unique beauty, fragrance, and splendor, it blossoms in muddy ponds. In Hindu temples, the deity stands on a carved lotus, indicating that although the Lord is in this world, He is always situated above it. Whenever we see a lotus, we can easily remember Krishna, just as Kunti’s prayer describes Him. Prabhupada’s commentary on this verse offers practical instruction for service to the Lord:

“The Pankajanabhi [lotus-naveled] Lord accepts the arca-vigraha (His transcendental form) in different elements, namely a form within the mind, a form made of wood, a form made of earth, a form made of metal, a form made of jewels, a form made of paint, a form drawn on sand, etc. All such forms of the Lord are always decorated with garlands of lotus flowers, and there should be a soothing atmosphere in the temple of worship to attract the burning attention of the nondevotees always engaged in material wranglings.” (Bhagavatam 1.8.22, Purport)

In his lecture on this verse that appears in Teachings of Queen Kunti, Srila Prabhupada turns from the lotus to the example of a shoe. If one’s child is absent from the house, off at school or play, one will naturally remember the child by glancing at the child’s shoe. “Oh, this is my child’s shoe.”

Prabhupada continues with another example: Even by experiencing the pure, clean taste of water on one’s tongue, something of Krishna may be appreciated. Krishna says in the Bhagavad-gita (7.8), raso ’ham apsu: “I am the taste of water.” One may come to know God just by thinking of Him while drinking water.

Then Prabhupada suggests how America’s intoxicated population can also someday come to remember the Lord: “In America there are many drunkards. There is no scarcity of them. But I may request even the drunkards, ‘When drinking wine, kindly remember that the taste of this drink is Krishna. Just begin in this way, and one day you will become a saintly, Krishna conscious person.’” (Teachings of Queen Kunti, 1.8.22, Purport)

The High Price of Material Progress

Queen Kunti continues: “My Lord, Your Lordship can easily be approached, but only by those who are materially exhausted. One who is on the path of [material] progress, trying to improve himself with respectable parentage, great opulence, high education, and bodily beauty, cannot approach You with sincere feeling.” (Bhagavatam 1.8.26)

Since the time Teachings of Queen Kunti was first published in America, the demands of material progress have only increased; moreover, they have spread all over the planet. Developing industry by advancing technology to transform the raw materials of the earth into fashionable commodities for the world market is the order of the day. At no time in history have human beings tapped into such an unusual variety of food, clothing, technical devices, home furnishings, vehicles, etc., imported from every corner of the world. The consumers often know nothing about the people who produced these things or how they were derived from natural resources.

Srila Prabhupada aptly breaks this situation down with the simple example of the poor people of Russia during the Communist regime. They were originally farmers, and their customs included going to church to pray to God to help them produce food. Gradually industry and commerce brought them to the cities, and the government took control of the distribution of foodstuffs. Under the influence of the new regime, their traditional prayer, “O God, give us our daily bread,” turned into, “O Communist friends, please give us our daily bread.” So the Russia’s leaders provided the citizens’ needs, but the conditions became more and more industrialized and atheistic. The churches became overgrown with weeds and covered with graffiti.

Putting all emphasis on material progress kills the very spirit of the human being. The human being is actually an embodied soul meant for self-realization.