Take the Mind to Vrindavana

Take the Mind to Vrindavana

A meditation while chanting the holy names in Hungary. 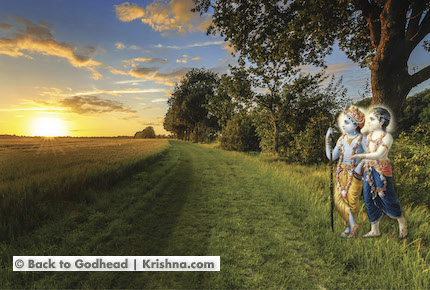 Sitting in the same place I sat this morning, the sun is no longer to my right but setting to my left, about to sink behind a tall tree. Birds continue to sing, some chirping in a staccato way, others questioning, “Where is Krishna?” The doves and pigeons are cooing, making background music to the beautiful symphony that is the heartbeat of Vrindavana-dhama. At this time of day, almost 6 o’clock in the early evening, we could be thinking of Krishna, wonderfully adorned in fresh clothes that the cowherd boys have dressed Him in, decorated with the beautiful flowers from the forest of Vrindavana. Different colours, pigments, and minerals from Govardhana Hill are illuminating and highlighting His beautiful transcendental form, and that of Balarama and His associates. Krishna’s peacock feather is fluttering in the wind, and everything? – ?from the top of His peacock feather to His bare lotus feet? – ?is covered in the cintamani dust of Vrindavana, dust that has been further purified by the transcendental surabhi cows whose hooves churn the dust into the air, making a beautiful cloud which then settles upon the cowherd boys, who are still full of unlimited energy: dancing, singing Krishna and Balarama’s names, frolicking, playing jokes amongst each other, cutting jokes about each other, throwing bael fruit like balls, and increasing the great ocean of transcendental bliss that is this pastime called go-charana, Krishna returning again from the forest pasture grounds of Vrindavana to Nandagrama. 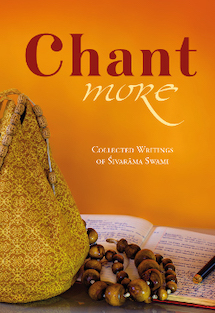 Krishna will not go directly back to Nandagrama, but rather He will go past the village of Yavata. Srimati Radharani has already returned to Yavata after Their midday meeting, and is cooking sweet preparations to be taken by Her gopi associates, on Mother Yashoda’s instructions, to Nandagrama for Krishna to enjoy at supper.

Krishna wants to see Her, and wants Her to see Him. Therefore He tends His cows in that direction. And everyone else wants to see Krishna and Krishna wants to see everyone else, because everyone, regardless of who they are, be they little children, babies in their mothers’ arms, or household animals, brahmanas, the elder men, the elder ladies, the young gopis, the young gopas? – ?everyone loves Krishna. This is what Vrindavana is about. And when we have such love for Krishna, then we will be always living in Vrindavana.

When you love someone, you want to see them. You just cannot get enough of seeing them. Your senses cry out for them? – ?your eyes by seeing, your nose by smelling, touch by touching … and in the same way, the Brijbasis, they have not seen Krishna all day, and they live only for the opportunity to be able to have His direct association. So when that great cloud of dust is seen on the horizon, then the Brijbasis know, “Oh, Krishna is returning!” And to confirm that this cloud is not some ordinary cloud, that it is not one of Kamsa’s demons coming to disturb them, the Brijbasis can hear the sound of the cows’ hooves; they can hear the beautiful lowing of the cows as they call out for Krishna, competing with each other just to be close to Him.

Most important of all, they can hear the sound of the flute.

And when they hear the sound of the flute, it is not just a sound, but it is actually a song that touches their hearts. Krishna sings the flute song as one melody, but actually it has an individual message for every living entity in Vrindavana.

When the gopis hear this commotion of the cows mooing and they see the dust cloud, they tell Srimati Radharani, “Quickly come! Your beloved, Syamasundara, whom You have been missing for the last few hours, is just about to pass by the house!” Then Srimati Radharani, with Her friends Lalita and Vishakha, runs up to the top of the moon tower, a six- or seven-storey tower that is part of Her house. From the top of that moon tower, She can see this vast, vast ocean of cows and cowherd boys.

Actually there is no counting the number of cows; some of them are snow white, some of them are reddish? – ?there are so many different colours. Some of them have faces like mridangas, others have straight horns, others have curved horns. They are decorated with different colours which are generally the hand prints of the gopas, and of course their hooves and horns are gold plated. They all wear beautiful garlands; some of them––the groups leaders––have silk blankets draped across their backs, and around their necks they have bells that are jangling. Just imagine the sound of these hundreds and thousands of beautiful bells, and all of the bells are chanting Hare Krishna. Just like everyone chants Hare Krishna.

By the arrangement of Yogamaya, within the midst of this cloud, within the sea of cows, Srimati Radharani––directed by the sound of the flute? – ?sees Syamasundara.

Rupa Goswami says aher iva gatih premnah (Ujjvala-nilamani 15.102) – that these loving exchanges are just like the movements of a snake. They are winding and crooked, and it is very difficult to determine whether there is any cause to them, or whether they simply happen by some transcendental accident.

When Krishna and Srimati Radharani have seen each other, when the inhabitants of Yavata have seen Krishna, and even Jatila and Kutila, who are Krishna’s greatest critics, they cannot help but climb the stairs to their roofs and, on the plea of criticising Krishna for His loose behaviour, they also fill their eyes with His beauty, His loveliness, His sweet smile which melts everyone’s hearts. And they fill their ears with the sound of His flute. If this is how those who are transcendentally inimical to Krishna react, then we can just imagine the reaction of Mother Yashoda and Nanda Maharaja, who have been standing on top of their palace for such a long time.

For them it appears like yugayitam nimeshena, like ages, just to hear the sound of the flute, just to see that cloud raised by the hooves of the cows. And when they finally do see it, then their eyes become so full of tears of love for Krishna that they again cannot see it, and they panic, thinking, “Maybe it is just an illusion, maybe I did not see,” but thankfully their assistants are there to tell them, and therefore Mother Yashoda and Nanda Maharaja turn to each other, and Nanda Maharaja says to his beloved wife, “Your son is returning to give joy to your eyes and your senses. Very soon you will be able to hold Him on your lap and embrace Him to your full satisfaction.”

When Mother Yashoda hears this she becomes so overwhelmed with ecstasy that tears pour from her eyes and her body shivers, and if not for the assistance of her gopi friends like Rohini and others, she would faint on the spot. But they tell her, “No! Yashoda-mayi, you must make arrangements to receive your son, get the arati tray to remove any inauspiciousness that may have clung to Him as a result of being out there in the forest with wild beasts, where Kamsa’s demoniac friends come. Make sure that the feast is being properly prepared. What about His bath? Is that being set out? And His new clothes that you had the tailor design for this very occasion, and the special ornaments that you want Him to wear tonight. You must immediately make these arrangements!”

As Mother Yashoda hears the many services that she has to do for Krishna, immediately she is the transcendental and ultimate temple commander of Nandagrama; she starts giving many instructions to her friends, associates, and servants, and they are bustling, running back and forth, because Krishna is coming back to Vrindavana.

If this is how Mother Yashoda is when Krishna is still some far distance away, then we can just imagine when she actually sees the cowherd boys approaching, and when, amongst those cowherd boys, she sees her sons, Krishna and Balarama: she becomes so ecstatic, so overwhelmed that although she reaches out her arms, she cannot move; she becomes stunned in ecstasy, just standing there like a statue. Krishna is required to come running into her arms and touch her so that she can then melt in motherly affection and again resume her non-statue-like form.

This is the wonderful return of Krishna to Vrindavana that happens at this time of day. Learned Vaishnavas meditate upon this pastime. In fact, Krishna’s pastimes, as they happen throughout the twenty-four hours of the day, are the subject of absorption of both practicing devotees as well as perfected devotees. So in that way, we should also take the opportunity whenever we have an extra moment to think, “What is Krishna doing now?” We are always thinking about what our family is doing, we are thinking about what we are doing, or what we want to be doing, or about the news, about what materialistic people are doing all over the world. But rather than spending our very valuable time with this, at least a few times a day we should ask ourselves, “Now what is Krishna doing?” and try to remember what Krishna does as it is written in Krishna Book, in Srimad-Bhagavatam. Venu-gita describes Krishna’s daily activities, and we should spend at least even a few minutes remembering them. It will only bring us ecstasy.

“The nectar of Your words and the descriptions of Your activities are the life and soul of those suffering in this material world. These narrations, transmitted by learned sages, eradicate one’s sinful reactions and bestow good fortune upon whoever hears them. These narrations are broadcast all over the world and are filled with spiritual power. Certainly those who spread the message of Godhead are most munificent.” (SB 10.31.9. The Gopis’ Song of Separation)