The days and nights of our passing years are Time’s soldiers, and our body’s defeat is inevitable.

Even the most powerful among us must eventually fall to the attack of Time and his multitude of soldiers. 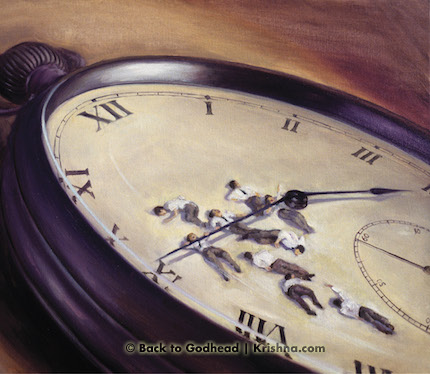 In an extended allegory in the Fourth Canto of Srimad-Bhagavatam, time is personified as a king named Candavega, meaning that he moves “violently and quickly.” He is figuratively described as having 720 soldiers – the days and nights of a year – that relentlessly attack. The main character in the allegory is Purañjana, who represents each of us – the spiritual being encased in a material body. Purañjana is protected by a five-headed serpent, which represents our five life airs, mentioned in the Mundaka Upanishad (3.1.9): “The soul is atomic in size and can be perceived by perfect intelligence. This atomic soul is ﬂoating in the ﬁve kinds of air (prana, apana, vyana, samana, and udana), is situated within the heart, and spreads its inﬂuence all over the body of the embodied living entities.”

When we’re young, the five-headed serpent is strong and easily resists the attacks of Time’s multitude of soldiers. Thus young people often think they will remain vibrant and hardy perpetually. But the passing days and nights mean those soldiers pound nonstop, and eventually the serpent weakens.

Gradually Old Age (jara) enters the scene. She is known as Kalakanya, “the daughter of Time.” Although no one likes Old Age, she inevitably comes to us anyway, and as a result of her presence, all kinds of happiness disappear, and often we cannot enjoy our hard-earned wealth, opulence, and comforts. Time’s army, combined with Old Age, plunders all our paraphernalia for sense enjoyment. 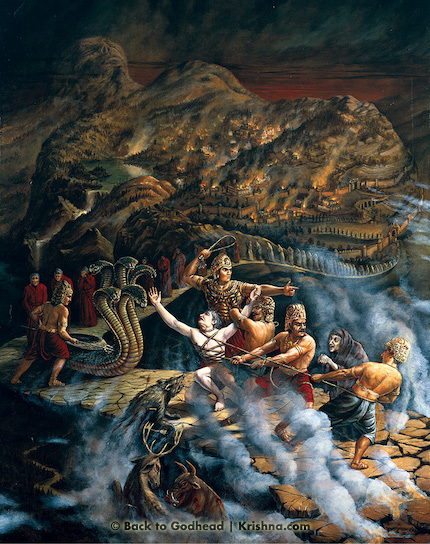 In the allegory, Old Age was once wandering all over the universe when she met the great sage Narada Muni on earth. Although she knew he was an avowed brahmachari (celibate), she proposed marriage to him. When Narada Muni refused her, she became angry and cursed him to be unable to stay in one place for long. Taking advantage of the curse, Narada Muni began constantly traveling, spreading the glories of Krishna and His devotees.

Although disappointed by Narada Muni, with his permission Old Age approached Fear (bhaya) to be her husband.  Unfortunately, Fear did not accept her as his wife but instead accepted her as his sister. Srila Prabhupada comments:

Kalakanya [Old Age] was sent by Narada Muni to Yavana-raja [King of the Uncultured] so that she might become his wife, but instead of accepting her as his wife, Yavana-raja accepted her as his sister. Those who do not follow the Vedic principles are unrestricted as far as sex life is concerned. Consequently they sometimes do not hesitate to have sex with their sisters. In this Age of Kali there are many instances of such incest. Although Yavana-raja accepted the request of Narada Muni to show respect to him, he was nonetheless thinking of illicit sex. (Bhagavatam 4.27.30, Purport)

Fear has an older brother named High Fever (prajvara), specifically the fever of 107 ˚F that immediately precedes death. As the story continues, we learn that the body is considered a city and the body’s senses, limbs, skin, muscles, blood, marrow, organs, limbs, mind, and intelligence are like its citizens. The city gates are the body’s nine holes: two eyes, two ears, two nostrils, the mouth, the anus, and the genitals. Fear, Old Age, and High Fever travel throughout the universe with their soldiers, attacking the body by entering through its nine gates. Srila Prabhupada describes:

When one is harassed by the invalidity of old age, various diseases manifest at the gates of the body. For example, the eyes become so dim that one requires spectacles, and the ears become too weak to hear directly, and therefore one requires hearing aids. The nostrils are blocked by mucus, and one has to always sniff a medicinal bottle containing ammonia. Similarly, the mouth, too weak to chew, requires false teeth. The rectum also gives one trouble, and the evacuation process becomes difficult. Sometimes one has to take enemas and sometimes use a surgical nozzle to accelerate the passing of urine. . . . Thus in old age all the gates of the body are blocked by so many diseases, and one has to take help from so many medicines and surgical appliances. (Bhagavatam 4.28.4, Purport)

As one loses control of the weakened senses and organs, the former objects of enjoyment become stale, and one laments one’s frightful condition. The proprietor of the body, the living soul, becomes sad at not being able to use the city of the body properly.

To make matters worse, as Old Age gradually takes away our beauty, intelligence, and opulence, our relatives and friends may become cold and indifferent, even disrespectful, and oppose our wishes. In Srila Prabhupada’s words, “A man keeps a family for enjoyment, and similarly family members demand enjoyment from the head of the family. When they do not receive sufficient money from him, they grow disinterested and ignore his commands or desires.” (Bhagavatam 4.28.7, Purport) The dwindling body is unable to counteract the effects of Old Age, and our anxiety increases.

Although the next life is a fact, people with no information about it are completely absorbed in this current life. This is the position of present society, a civilization of sense gratification. Almost everyone is engaged only in maintaining the body, home, and family, and as the end of life approaches, people are confused, not knowing what spiritual life and the goal of human life are. Because people think only of this life, they avoid entertaining the idea of spiritual life.

Eventually, although the soul has no desire to leave the city of the body, Old Age forces the soul to leave. Then High Fever sets fire to the city, destroying the body’s parts, the citizens. The living entity, the proprietor of the body, is unhappy.

There is, however, a bright side to this grim scenario. By bringing on the dwindling of the body, Old Age offers a service to Krishna, the Supreme Personality of Godhead. Due to old age, sane people may become fearful of death and feel an impetus for spiritual life. In other words, Jara, the invalidity of old age, can evoke Bhaya, fear of death, and induce us to prepare for our next life. Then we will understand that materialistic advancement is not actual progress. In Srila Prabhupada’s words, “What is that ‘progress’? A dog’s jumping is progress? A dog is running here and there on four legs, and you are running on four wheels. Is that progress?”

Consequently, sometimes those who have no idea of religion notice that the Indian saintly persons are not working hard like dogs. Spiritually uncultured people think the dog race is life. But actual life is spiritual progress. (Civilization and Transcendence, Chapter 2)

In the words of the Bhagavatam (2.1.6), “The highest perfection of human life, achieved either by complete knowledge of matter and spirit, by practice of mystic powers, or by perfect discharge of occupational duty, is to remember the Personality of Godhead at the end of life.” Real progress is not advancement in technology or medicine or any other mundane achievements, however helpful and ingenious they may be. Real progress is to put an end to birth, death, disease, and old age, and that is achieved though self-realization. And if we realize who we are – spiritual beings – we can also have an understanding of who God is – the supreme spiritual being.

For devotees, another bright side to this grim Time scenario is that time does not affect them in the same way it affects the spiritually uninformed. The Bhagavatam (2.3.17) says, “Both by rising and by setting, the sun decreases the duration of life of everyone, except one who utilizes the time by discussing topics of the all-good Personality of Godhead.”

“How is this?” one may ask. “Doesn’t the year have the same number of days for devotees and nondevotees? Don’t devotees grow old and die like nondevotees?”

If a person is Krishna conscious, he can work like a young man even if he is seventy-five or eighty years old. Thus the daughter of Kala (Time) cannot overcome a Vaishnava. . . . Apparently a devotee may grow old, but he is not subjected to the symptoms of defeat experienced by a common man in old age. Consequently, old age does not make a devotee fearful of death, as a common man is fearful of death. When jara, or old age, takes shelter of a devotee, Kalakanya diminishes the devotee’s fear. A devotee knows that after death he is going back home, back to Godhead; therefore he has no fear of death. Thus instead of depressing a devotee, advanced age helps him become fearless and thus happy. (Bhagavatam 4.27.24, Purport)

An analogy can make this point clear: If we think of death as a cat, and think of a person devoid of spirituality as a rat, when the cat comes for the rat, the rat is overwhelmed with fear – “What will become of me? What will become of my spouse and children, of my assets and legacy?” On the other hand, a spiritualist, a devotee, is compared to a kitten. When the same cat comes for the kitten, although the cat has the same strong jaws with the same gleaming white fangs, the kitten feels protected and comforted. The kitten thinks, “Yes, now my mother has come to pick me up and carry me to safety.” Similarly, the devotee sees old age and inevitable death as Krishna. Ultimately, Krishna is both Time and Death, and He will carry His devotee to safety.