Overindulgence in material comforts can erode our sense of purpose.

Instead of seeking material comfort that breeds spiritual complacency, we can seek transcendental comfort in the Lord and increase our spiritual intensity.

Comfort breeds complacency. The Ramayana illustrates this paradox through the story of Sugriva, the vanara* hero who had been unfairly exiled by his brother, Vali, due to a misunderstanding. During the exile, after all his attempts at reconciliation with his brother had failed, he formed an alliance with Rama, who Himself had been exiled from His kingdom, Ayodhya, and was searching for His abducted wife, Sita. Rama helped Sugriva right the wrong done by his brother and gain the kingdom. In return, Sugriva promised to help Rama find Sita. 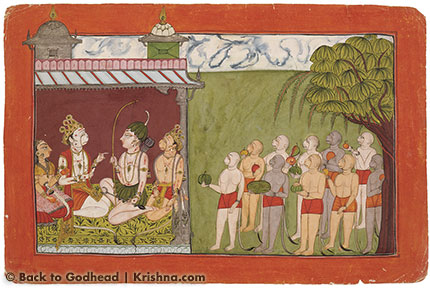 By the time Sugriva was enthroned as the king, the rainy season had started. The four months of rain made traveling impossible. So Rama and Sugriva agreed to wait for the rainy season to end before they began the search for Sita. During the waiting period, Sugriva invited Rama to stay in his kingdom in a royal palace. But Rama, wanting to be true to the terms of his fourteen-year exile, stayed in a cave outside the kingdom.

During this four-month period, Sugriva found himself amidst prodigious creature comforts – comforts he had long been deprived of during his exile. And he unwittingly lost himself in sensual revelry, forgetting all about his promise to Rama.

Time passed and the rainy season ended. Rama found no sign of Sugriva making any arrangements for the search. Feeling concerned, Rama asked His younger brother Lakshmana to go to the vanara kingdom to take stock of the situation. On his way to, Lakshmana, contemplating what he thought was Sugriva’s ingratitude, became increasingly incensed, till he was seething with fury. Seeing him, the vanara guards became alarmed and scurried off to the palace to alert their king.

Meanwhile, Sugriva hadn’t remained entirely inactive – he had been jolted into activity by his vigilant counselors, his wise wife, Tara, and his able minister Hanuman. When the rains had started lessening, they had reminded Sugriva of his promise, and he had immediately ordered that vanaras be summoned from far and wide so that they could join the search. But after this brief phase of dutifulness, Sugriva was once again sucked into indulgence by his surrounding luxuries.

When Lakshmana entered Sugriva’s chambers and saw the signs of sensual revelry, he exploded. He declared that ingratitude was the greatest of sins and condemned the ingrates who enjoyed themselves while neglecting their promises to their friends. While Sugriva was mortified, Tara intervened and pacified Lakshmana with gentle words: Even great sages had fallen prey to temptations – let alone a vanara who had been long deprived of pleasures and was suddenly surrounded by them. When she assured Lakshmana that powerful vanaras from far and wide were already on their way to Kishkinda to assist in the search for Sita, Lakshmana became pacified.

Sugriva faced another temptation just before the climactic war between Rama and Ravana. With characteristic cunning the demon king tried to engineer a split in his opponents. He sent messengers secretly to Sugriva with gifts, stating that the vanaras and the rakshasas (Ravana’s man-eating followers) had no enmity with each other. He further offered Sugriva a favorable pact of mutual assistance if he withdrew his forces from the fray. Living in an austere military camp and being fixed in Rama’s service, Sugriva felt not in the least tempted. He rejected the allurement, declaring that Rama’s enemy was his enemy too.

Comforts often erode our devotion subtly. If some miscreants attacked a dam explicitly, security forces would spring into action to counter them and protect the dam. But if those miscreants caused a tiny leak, most observers may not even notice it – and the water seeping through may eventually bring down the huge dam.

Similarly, if the forces of illusion came straight out and tempted us with immoral, anti-devotional indulgences, we would probably reject such temptations. But when those forces attack using the weapon of comfort, the attack doesn’t make us openly reject God – it just makes us push Him down on our priority list as comforts rise up on that list.

We may acquire worldly resources for God’s service and might even use them for that purpose initially. But gradually we may start indulging in them till the original purpose is forgotten and abandoned – not because of any explicit anti-devotional intent on our part but simply because our increasing sense of complacency has subtly eroded our devotional determination.

Such subtle erosion can be countered by the practice of austerity. While adversity involves imposed deprivation of material things, austerity involves their voluntary renunciation. Austerity can sharpen our spiritual purposefulness, as illustrated in an episode from the Mahabharata.

When the Pandavas were living in the forest, during one of the later phases of their exile they ascended through the Himalayas to the heavenly arena where Kuvera, the treasurer of the gods, has his gardens. That great god invited them to stay there for as long as they desired. The Pandavas accepted the invitation. While there, they were technically still in forest exile, but their stay in this heavenly forest was far more comfortable than their austere life in earthly forests. After the Pandavas had stayed there for some time, Bhima and Arjuna approached Yudhishthira and suggested they return to the earthly forest. They both felt that staying amidst comfort would make them forget the atrocities perpetrated against them, deaden their martial spirit, and leave them unprepared to confront the wily Kauravas, who had wrongfully seized their kingdom.

The Pandavas hoped to regain their kingdom without confrontation, but they were no Pollyannas – they knew that Duryodhana was driven by an inveterate envy of them, so he would be unlikely to settle for any compromise. They needed to be prepared for the war, both in spirit and in resources. Yudhishthira agreed with the reasoning of his two heroic brothers, and they soon descended to the austere life in earthly forests.

Externally the situations and responses of Sugriva and the Pandavas were radically different. Sugriva had regained his kingdom, whereas the Pandavas had lost theirs. Further, Sugriva had forgotten his obligation to the Lord, whereas the Pandavas wanted to remember their duty – they wanted their kingdom so that by ruling it through dharma they could serve and glorify the Lord. Still, despite these dissimilarities, the two situations share an underlying theme: indulgence in comforts can erode our sense of purposefulness. Sugriva lost that sense because of immersion in comforts and pleasures. The Pandavas, on the other hand, protected themselves from such a loss by giving up the comforts that might have made them complacent. Indeed, austerity can often serve as an insurance against complacency.

In our times, comforts come to us primarily through technology. It often fills us with a sense of godless omnipotence – we are led to believe that just by clicking a few buttons we can get whatever we want. Thus we are allured towards a technological paradise that is touted, overtly or covertly, as a superior substitute for any spiritual paradise.

But while we may temporarily control more and more external things by clicking a few buttons, we find ourselves being increasingly unable to control by any button the world within us. Our minds and emotions become increasingly disorderly. As the Reverend Martin Luther King put it, “The means by which we live have outdistanced the ends for which we live. Our scientific power has outrun our spiritual power. We have guided missiles and misguided men.”

In contemporary times, the more humanity is distancing itself from God in the hope of a hi-tech paradise, the more it is being overwhelmed by mental problems. Indeed, the World Heath Organization has declared mental health problems the greatest health challenge of the current century.

Nonetheless, the bhakti tradition is not Luddite; both the Ramayana and the Mahabharata feature sophisticated weapons. Bhakti wisdom explains that the problem is not the prevalence of technology; the problem is the absence of God consciousness – an absence that is aggravated by the reductionistic worldview that accompanies modern technology.

To cultivate such discernment, we need to perform the conscious austerity of fixing our mind on God through direct devotional practices such as chanting God’s names and studying scripture. When we habituate ourselves to such direct God consciousness, we will be able to see the spiritual underlying the technological, thereby protecting ourselves from complacency.

Bhakti asks not for the rejection of the world but for the world’s connection with its source. While some renouncer traditions do see the world primarily as a place of entanglement, the bhakti tradition sees it more positively – as a resource to serve God. Everything material and spiritual comes from God, so it is intrinsically connected with Him as His energy and is meant to be used in His service.

Accordingly, the bhakti tradition doesn’t romanticize adversity or demonize prosperity – it urges us to utilize whatever circumstance we find ourselves in. Adversity in and of itself is not spiritually beneficial; extreme adversity can make both basic material subsistence and basic spiritual practice difficult. And prosperity in and of itself is not spiritually harmful; a reliable and comfortable provision of material needs can free the mind from survival anxiety to ponder higher spiritual truths and ultimately the highest spiritual truth, God.

Though the kingdom had induced forgetfulness in Sugriva, none of his counselors asked him to renounce it. Instead, they asked him to revive his remembrance of Rama’s benedictions and render practical service to Him. Similarly, we can see whatever comforts we have as God’s gifts. Rather than seeing them as agents of temptation and illusion, we can see them as expressions of God’s kindness and thus feel inspired to serve Him better. We can think, “As God has given me a comfortable situation in which to serve Him, let me increase and intensify my service to Him: increase in quantity by using these resources to spread His glories, and intensify in quality by cherishing His remembrance more.”

Tara, Hanuman and Lakshmana all reminded Sugriva of his obligation and helped him correct his deviation. Similarly, we too need friends and guides who can remind us of our obligation to the Lord, especially when we start deviating from it.

Spiritual association is vital for preserving our sense of devotional purposefulness. To the extent we keep ourselves in such association and hear spiritual messages therein – as did Sugriva – we will be safe, even amidst worldly comforts. We won’t be caught by the material, but will see beyond the material to the supreme spiritual reality, the Lord of our heart, thus staying connected with Him. And that inner connection is life’s supreme comfort, the one comfort that will never become pale and stale, the one comfort that will always shelter us, and the one comfort that, far from breeding complacency, will raise our devotion to greater fervor.

**The theory that every complex phenomenon can be explained by analyzing the simplest, most basic physical mechanisms in operation during the phenomenon.