An act viewed as obstinacy may in fact be one of righteous determination.

Stubbornness covers a spectrum from obstinacy to resolute determination. 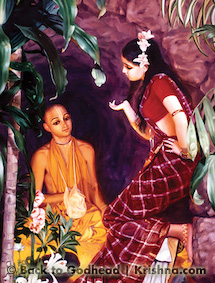 One day when I was five or six years old, in India, while my father was busy shopping at the market I saw a little white lamb outside the store gazing at me with eyes that wanted to say something. Fascinated, I followed it and, not realizing I had lost my way, was led unaware into a slaughterhouse. Suddenly a bulky man came and dragged the little lamb by the rope tied around its neck and flung it into another room.

What I saw and heard next shocked me so deeply I’ll never forget it – gruesome images of blood-smeared walls, foul-smelling chambers engulfed in a cloud of terror, mutilated body parts of gullible animals strewn all over the floor, painful cries and panic-stricken eyes of half-dead animals writhing in pain.

By the time I realized what was happening there, I felt a strong arm get hold of me. It was our driver. He had seen me entering that dreaded place. I was terrified by the scene I had just witnessed. In the meantime my father was frantically looking around for me, and as my driver brought me back and narrated the incident, my father immediately took me in his arms and warned me to never go out of his sight again.

Recently I was invited to a friend’s relatives’ home to speak about how to practically implement the teachings of the scriptures in our day-to-day lives. The hospitable family had arranged a delectable buffet for the invited guests, and after the session I was escorted to the dining hall, where the host served me a huge plate of fine vegetarian dishes. As I was about to offer the food to the Lord, the host informed me that another platter of delicacies was on its way. He proudly announced that these were especially prepared to honor my presence at their residence. But when the gigantic trolley of preparations was wheeled into the hall, I was shocked to see that it was overflowing with all possible varieties of meat preparations.

I was instantly transported in time to the slaughterhouse I had wandered into as a child. The vivid memories of the mass killings triggered an acute, stinging pain somewhere deep down, as if the core of my heart had been pierced with sharp arrows. I was shattered just at the thought. How can anyone forsake the virtue of mercy and massacre innocent living creatures just to temporarily satisfy one’s taste buds?

Jolted back to reality, I politely refused to partake of the nonvegetarian preparations.

Then I overheard an elderly gentleman mumbling under his breath, “This girl is very stubborn. What harm would it do if she ate some meat? She could have had it, to show respect to the host.”

Although he wasn’t addressing me directly, I felt compelled to reply. So, while my host and others listened, I explained the shastric injunctions against meat-eating, why meat cannot be offered to God, and why it is considered to be in the mode of darkness. I spoke of the gravity of my spiritual vows and of the health reasons for not eating meat.

The perceptive host immediately comprehended the deeper significance of not eating meat and promised to never touch meat again. He also promised to share this pivotal knowledge with all his acquaintances.

Though it might be hard to believe that my few words could so quickly change this man’s life, in fact they did. He and his family gave up eating meat. They are now under my spiritual counseling and are sincere followers of the Krishna consciousness movement.

I’ve mentioned this incident here because it relates to the topic I wish to discuss, and that is the accusation by some people that we Hare Krishna people are too stubborn about our principles.

The word stubborn can mean both “leaning towards obstinacy or fanaticism” and “leaning towards firmness or determination.” An understanding of this dynamic quality can help us make it a virtue in our own lives rather than a vice. 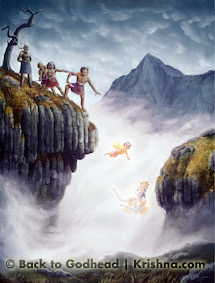 In his authoritative book Sri Upadeshamrita: The Nectar of Instruction, Srila Rupa Goswami writes that one’s devotional service is spoiled when one rejects the rules and regulations of the scriptures and works independently or whimsically. It’s seems accurate to say that such a rejection comes from stubbornness. To some degree, we all possess the quality of being stubborn, in the positive or negative sense. It manifests in varying degrees at different stages and in myriad circumstances of our lives. This personality trait stems from our desires, conditioning, upbringing, and association, from fear of change, and most importantly from the consciousness we have developed or nurtured over time.

Stubbornness is like an oscillating point on a line between determination and obstinacy. Though often highlighted in a negative light, stubbornness can be a positive characteristic when it helps us remain focused on a higher principle, such as when it aids us in rejecting the lower objects of sensual gratification.

Stubbornness as a Vice

In the epic Mahabharata, Duryodhana is a classic example of stubbornness that leans towards obstinacy. After repeated urges from Lord Krishna and other superiors to make peace and avert a massacre on the battlefield of Kurukshetra, he remained adamant. Duryodhana was acquainted with the terrible results of such a degree of stubbornness, but his intellect was covered by the ugly vices of greed, pride, arrogance, and obstinacy. No amount of logical explanation or reasoning could help him see his folly. Sometime before the war, Lord Krishna showed him His universal form while trying to prevent the war, but the ignorant Duryodhana paid no heed to His divine advice. The result was destruction – the annihilation of millions of soldiers. Remorse and grief afflicted relatives and friends on both sides.

Our mind too may fall prey to the vice of stubbornness. In spite of understanding the need to serve the Absolute Truth, and knowing well that the proposed change would be beneficial, we may continue to lead an animalistic life that results in our downfall, entangling us in the repeated cycle of birth and death.

Studies show that even when people see that spirituality has transformed innumerable lives for the better, they fail to take up a life of enlightenment and wisdom. Unconsciously, their minds are ruled by their false ego. They are overcome by fear and resistance to change, unwilling to leave their comfort zone. Conscious reflection and self-awareness can aid in overcoming this negative pattern of stubborn behavior.

Stubbornness as a Virtue

The great devotee Prahlada Maharaja was also labeled “stubborn” by his demon father, Hiranyakashipu. The evil father wanted his son to worship him as the Supreme Lord, and he inflicted all kinds of barbarity on the child. He had him put into a blazing fire, dropped from a mountain peak, thrown into a pit of poisonous snakes, tossed under herd of wild elephants to be crushed, locked in a dark cell without food or water, exposed to freezing winds and violent storms, pushed into the sea, attacked with sharp weapons, and fed poison, but none of these could harm the five-year-old pure devotee, who was constantly under God’s protection. And nothing could swerve the unflinching faith of Prahlada, who remained fixed and determined in his devotion. Ultimately, the Lord appeared in the form of Narsimhadeva (the half-man, half-lion avatar) to protect His devotee and kill the demonic father.

Another perfect example of being stubborn on the side of determination is Haridasa Thakura. Born in a Muslim family, he received enlightenment and would unfailingly chant 300,000 names of the Lord each day. After all efforts of the wicked atheist Ramchandra Khan failed to dissuade Haridasa from chanting the glories of the Lord, he sent a prostitute to defame him and tarnish his pristine character. But the holy name is so powerful that as the prostitute listened to him chanting, the contaminations in her mind melted away and she regretted her mission. She finally fell down at his feet and begged him for forgiveness. The prostitute became a celebrated devotee. She conquered her senses and became very advanced in spiritual life, ultimately attaining pure love for Lord Krishna.

On another occasion, the local Kazi (Muslim magistrate) complained to the Nawab (Muslim king) that Haridasa had rejected the religion of his birth to worship the Hindu’s God. The king told Haridasa that if he didn’t give up his worship, he would be punished.

The Chaitanya-bhagavata beautifully portrays Haridasa’s reply: “You may cut my body to pieces, and the life may leave it. But I will never abandon the holy name, which my tongue will ever continue to chant.”

This statement demonstrated Haridasa’s unswerving determination in his worship of the holy name. He was branded as “stubborn,” and the Kazi ordered that he be flogged in twenty-two marketplaces. But the cruel tortures did not cause him even the slightest discomfort, as he continued to chant and was protected by the Lord Himself. By the Lord’s grace and Haridasa’s unwavering determination, both the Nawab and the Kazi realized their mistake and were able to become free of the consequences of their evil misdeeds.

How can we determine whether our stubbornness in a particular instance is positive or negative. We need to conduct a simple test: If our thoughts, words, or actions are favorable to devotion and pleasing to the Lord, then we are on the correct path. But if we realize that the Lord would be displeased, then we must immediately take corrective measures, open ourselves to accepting favorable change, and slide from obstinacy to firm determination and finally to virtuosity.

Since every devotee of the Lord is under the protection of His supreme potency, we should not deviate from the path of devotional service under any condition. Hence, by such dedicated faith and firm conviction, stubbornness becomes an asset.

My humble proposal to the gentleman who randomly commented that I should consume meat to show respect to the host is “Showing ‘respect’ by compromising the higher principles of righteousness equals cheating both God and the soul towards whom such perceived respect is exhibited. In a real sense, it means showing disrespect towards God’s will and encouraging an ignorant soul to continue functioning in the mode of ignorance or darkness.”

Stubbornness can be a virtue or a vice depending on how we exercise the choices at our disposal. During my college days, I was subjected to peer pressure and expected to relish the flesh of dead animals, to gossip, and to savor alcoholic beverages, but I never relented even for a fraction of a second. Yes, I was labeled “stubborn” back then. But I’m proud of it, because rather than becoming a slave of the senses, yielding to carnal pleasures, or hankering for the need to be accepted in a Godless civilization, I prefer being “stubborn” to maintain high moral standards, to remain virtuous, ethical, and chaste, and to honor our Creator.

As we become stronger and more serious in our perseverance to love God and serve Him, our consciousness becomes purified. We begin to see with clarity. We no longer submit to bodily cravings or an obstinate mindset of aspiring to fit in with the mindless crowd. We learn to dovetail the trait of being stubborn, moving along the spectrum from obstinacy to firmness and determination.

The key is to mold our lives in such a fashion that we become determined, persistent, and “stubborn” to cultivate attraction for the holy name, that we seek guidance from bona fide counselors and self-realized souls, that we equip ourselves with proper knowledge from the Vedic literature, and that we perennially remain fixed on the celestial journey to our ultimate destination – back home, back to Godhead.