Steer Your Life Guided by Wisdom

Steer Your Life Guided by Wisdom

he benefit of having a human body over an animal body is the ability to direct our life toward a higher destination.

The Vedic scriptures point us to the highest destination and tell us how to get there. 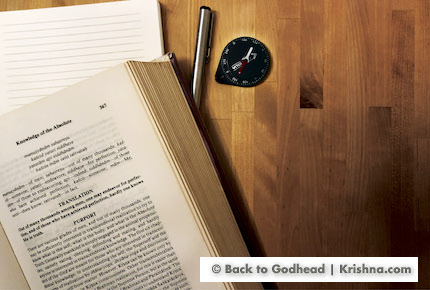 Life is a journey, and on this journey the soul is seated in the vehicle of a body given by the material nature (bhramayan sarva-bhutani yantrarudhani mayaya, Gita 18.61). Material nature supplies various types of vehicles to the souls wandering in material existence, depending on their past desires and karma. Out of various types of vehicles, the human body is considered the best vehicle for the journey towards a spiritual destination. And Prahlada Maharaja says in Srimad–Bhagavatam (7.6.1), durlabham manusham janma: “A human birth is rarely achieved.”

We are all extremely fortunate to have this human vehicle, which is better equipped for the journey of life than animal forms. According to Hitopadesha (25),

“Both animals and men share the activities of eating, sleeping, mating and defending. But the special property of the humans is that they are able to engage in spiritual life. Therefore without spiritual life, humans are on the level of animals.” This verse suggests that the privilege of having a human body over an animal body is the ability to steer our life towards a destination higher than just eating, sleeping, mating, and defending, which even animals can sometimes do even better than human beings.

The greatest privilege of being in a human vehicle is the opportunity to learn about the highest destination and how to get there. Whether we know it or not, our journey began the moment we were born by the force of time. So it’s time to understand the wisdom given in the Vedic scriptures, especially Bhagavad-gita, to make this journey successful.

Krishna, while seated in a vehicle, a chariot, speaks to Arjuna about the existential journey of the soul, about the vehicle the soul acquires, and about how to drive the vehicle to its ultimate destination.