Srimad-Bhagavatam: The Book that Responds to Your Desire

Srimad-Bhagavatam: The Book that Responds to Your Desire

While packing for a trip to America, an Indian couple must reluctantly leave their beloved Bhagavatam volumes behind.

A story of the Lord’s response to a devotional longing. 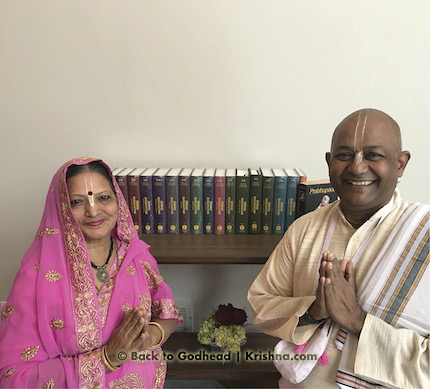 On December 1, 2018, my wife, Jaya Gaurangi Devi Dasi, and I were doing the final packing for our flight from Coimbatore, Tamil Nadu, to Seattle to visit our daughter. Due to airline restrictions on the size and weight of luggage, we were prioritizing the items. Finally we had to make a major decision: Do we carry our three cantos of Srila Prabhupada’s Srimad-Bhagavatam with us or not? My wife is quite attached to having the physical book for her daily reading. Though we would carry a laptop computer and an iPad installed with the VedaBase, which has all of Srila Prabhupada’s books, she never felt the same with any electronic device. After juggling the items many times, we were still exceeding the volume and weight limits. Unfortunately it was the bulky and heavy books that had to give way. With a heavy heart, she agreed to part with the Srimad-Bhagavatam books and use the electronic version.

From a warm 82o F Coimbatore, we landed midday in Seattle on December 23 to a cooler 37o but with a warm welcome by our daughter, Sakti Priya. The 27-hour journey was smooth and unusually relaxing. Surprisingly, we did not experience jet lag, and woke up early as usual on our first day in Seattle to perform mangala-arati.

After a few days of getting acquainted with the neighborhood of Wedgwood (an area within Seattle), we visited ISKCON Seattle on Saturday. The temple is located twenty-five miles away, or about forty-five minutes of driving. When we entered the temple hall, we had darshana of Sri Sri Radha–Nila-Madhava, Jagannatha, Baladeva, and Subhadra Devi, and Gaura-Nitai. The gorgeously dressed deities, the transcendental aroma of the flowers and incense, the clean, well-lit ambience, and the ethnic touch to the interiors stood as a testimony to the culture brought and distributed by His Divine Grace Srila Prabhupada.

The book stall, with its nice display of Srimad-Bhagavatam, gave a remembrance of separation. We both stared at them for some time and left the temple hall with a sigh. We then partook of delicious prasadam and met the temple president, Nama Vrata Dasa. He briefed us about various projects, preaching activities, and sankirtana. At the end of the day we left the temple feeling elated.

This day shall remain one of the most unforgettable in our lives. It was 5:30 p.m. The sun had already set at 4:30, and the rain had continued since morning. We had just completed the evening arati when we saw our son-in-law, Sures Kumar, bringing a heavy carton to the living room.

He smiled at us and said, “This is a gift for you.”

Taken by surprise, we asked a lame question.

“What is the occasion?”

He smiled, and without any reply started to unpack the carton.

In next few minutes there was screaming in ecstasy and loud chanting of “Hare Krishna!” “Haribol!” as we watched a full set of Srimad-Bhagavatam magnificently appear. We paid our obeisances and could not control our emotions. I hugged Sures while trying to hide my tears. We immediately offered incense to the books and arranged the eighteen volumes on a shelf.

We threw questions at Sures. How did you know we wanted these books? Where did you get them? Have you become an ISKCON Life Member?

I then asked him, “Do you know whom you have brought?”

He looked at me and shyly replied, “No, not really.”

Jaya Gaurangi softly told him, “You have brought Krishna to your home.”

She repeated this a few times, losing control.

The Story Behind the Arrival of Srimad-Bhagavatam

Raghavendar is a colleague of Sures Kumar at Google Seattle. Some months before our arrival in Seattle, someone recommended that he and his wife read Srimad-Bhagavatam during her pregnancy. After some research, Raghavendar wanted to buy the books from ISKCON. Through a friend from Delhi, he ordered a set from the temple there. After more than a month, the books had not arrived, and despite his efforts, he couldn’t find any trace of the shipment. While considering buying Srimad-Bhagavatam from some other publisher, he decided to place another order with ISKCON Delhi. This time the devotee at the Delhi temple made sure to communicate regularly till the parcel reach its destination in Seattle.

Finally Raghavendar was pleased to see the eighteen volumes and started reading with his wife. Then UPS delivered a second parcel containing a set of Srimad-Bhagavatam. That set had taken a long detour and traveled to different states before reaching the correct address.

Now Raghavendar had two sets of Srimad-Bhagavatam. He offered one set to some of his colleagues, but no takers. He called the devotee at the Delhi temple and asked what he should do. The devotee advised him to hold onto the books and he would find a Hare Krishna devotee in need of this great scripture.

A few months went by, and on December 21, during a casual chat with colleagues, Sures mentioned our visit to his home and our being ISKCON devotees. Immediately Raghavendar jumped in and asked if we were Hare Krishna devotees. He then unfolded the episode of the extra Srimad-Bhagavatam set and requested Sures to come and collect the book set that day.

In a letter to Shivananda Dasa dated April 19, 1968, Srila Prabhupada wrote, “And Bhagavad-Gita is the ABC’s of spiritual knowledge. Beyond that is Srimad-Bhagavatam. How great Srimad-Bhagavatam is nobody can imagine.”

Srimad-Bhagavatam is nondifferent form Krishna. Krishna’s promised in Bhagavad-gita (4.11), ye yatha mam prapadyante tams tathaiva bhajamy aham: “As all surrender unto Me, I reward them accordingly.” Similarly, when anyone surrenders to Srimad-Bhagavatam, He rewards them by appearing anywhere and everywhere for them. Krishna also says (Bhagavad-gita 9.22) that for His devotees, “To them, I carry what they lack.”

In our case, we have neither the qualification nor the purity to receive those benedictions. But we have realized that Krishna – Srimad-Bhagavatam – is very magnanimously merciful to appear in our daughter’s house in Seattle, simply to give us another chance to engage in devotional service.

All glories to the king of the holy scriptures, Srimad-Bhagavatam!