The early Hare Krishna movement grew because its leader elevated the efforts of his inexperienced soldiers.

To fight his war against illusion, Prabhupada empowered his disciples to accomplish many things for which they seemed unqualified. 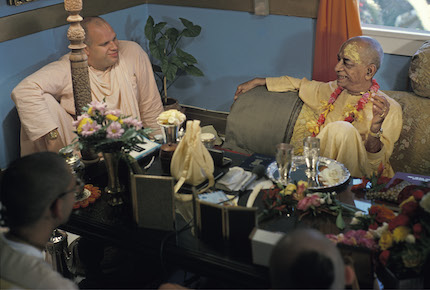 As Gaudiya Vaishnavas, we are fortunate to be connected to a long line of great saints, highly empowered acharyas who were progressive and revolutionary in the way they shared the Vaishnava philosophy. Srila Bhaktivinoda Thakura, his illustrious son Srila Bhaktisiddhanta Sarasvati, and ISKCON’s own beloved founder-acharya, Srila A. C. Bhaktivedanta Swami Prabhupada, were extremely resourceful and visionary in their endeavors to give Krishna consciousness to everyone, to make the science of living accessible and applicable to people from all countries, castes, strata, and educational levels. In doing so, they took many risks, sometimes being innovative with details that diverged from traditional rituals and customs.

One obvious instance of resourcefulness combined with faith can be seen in Srila Prabhupada’s drafting unqualified people to take on the service of being ambassadors of Krishna consciousness by initiating them as brahmanas and sannyasis. This concept becomes clarified when explained in Srila Prabhupada’s own words, as we can see in this excerpt from a conversation he had with his secretary Tamal Krishna Goswami after ISKCON’s annual Mayapur Festival in 1976:

I am in a war with maya, the material energy, and I need leaders. It is called in wartime “battlefield commission.” There are no qualified leaders, but someone has to lead the charge.

So you take every fifth man – “Now you are the lieutenant of the squad.” He really is a private, but we make him lieutenant for the day, and he leads the charge. It is to be understood that “you are not sufficiently equipped for this fight, and most of you will go down.” (Recalled by Dhrishtadyumna Dasa, who was present, in Following Srila Prabhupada – Remembrances, DVD 11)

Imagine a war, a serious battle where the generals, captains, and lieutenants on one side are almost all gone. One of the highest-ranking leaders still on the battlefield decides to empower lower-ranking soldiers, out of sheer necessity, to act as lieutenants, captains, or sergeants even though none are prepared or experienced enough for such posts. This is an emergency battlefield action, wherein someone is commissioned to serve despite his or her insufficiency. The leader, being experienced and qualified, knows that officers thus commissioned may not be able to handle the position. But a dutiful soldier who takes up the service and accepts the charge is appreciated and honored, often becoming more and more empowered because of willingness to simply follow the wartime instruction. In such a situation, as Srila Prabhupada aptly foretold in regard to his own “soldiers,” there will be unavoidable casualties.

Our Srila Prabhupada accomplished a seemingly impossible task because he had profound faith in the holy names of Krishna and the instructions of his guru. Srila Bhaktisiddhanta Sarasvati had requested our Prabhupada to share the message of Chaitanya Mahaprabhu with the western world to bring hope, peace, and understanding to a world rampant with materialism and ignorance. The request called for faith, boldness, wisdom, and humility. It demanded determination and the ability to delegate responsibility to others in the face of myriad obstacles. These qualities were pronounced in Srila Prabhupada, who came to the United States at an advanced age to carry out his guru’s instructions.

We can look at a comparable instruction five thousand years ago on the battlefield of Kurukshetra. Lord Krishna Himself, the original spiritual teacher for everyone, gave a similar instruction to Arjuna, His devoted friend. He requested Arjuna to fight to reestablish righteous principles on the earth in the face of a formidable opposing army that included many of Arjuna’s relatives.

On Arjuna’s side were many highly qualified warriors. But when Srila Prabhupada came to fulfill a similar function – to reestablish righteous spiritual principles in a decadent world culture – he had no qualified warriors to choose from. So in a great act of faith and love, he gave many battlefield commissions. Sometimes the Lord wants more glory to go to His devotee than to Himself. By giving the daunting task to Srila Prabhupada, who then commissioned his woefully unprepared disciples to assist him, Lord Krishna glorified the beloved founder-acharya of the International Society for Krishna Consciousness.

Some fledging, neophyte devotees failed when accepting Srila Prabhupada’s battlefield commissions – his emergency appointments of us to carry out duties and responsibilities for which we surely were unqualified. But some became purified and empowered to do “impossible” things. How else could the Krishna consciousness movement have become an ever-growing God-conscious society attracting thousands of people from almost every corner of the globe – people committed to cleanliness, truthfulness, compassion, and self-discipline while endeavoring to reestablish their long-lost relationship with Lord Krishna?

When we dedicate ourselves to studying the transcendental storehouse of wisdom left for us in the Bhagavad-gita, Srimad-Bhagavatam, Chaitanya-charitamrita, and similar scriptures, to regularly and sincerely calling out the holy names of the Lord, to being examples for others, and to serving others, our practices are instances of our acceptance of our battlefield commissions.

Does the concept of battlefield commission mean that current ISKCON leaders are ill-equipped for the task of leadership today?

The mercy of the spiritual master and the mercy of the Lord come together to bless the sincere servant who accepts a “battlefield commission.” That mercy makes the unqualified qualified. For example, when Srila Prabhupada sent young disciples to England to spread the Krishna consciousness movement, they approached the service with enthusiasm and cooperation despite their apparent lack of experience, skills, or money. Their committed efforts resulted in amazing results, including more than one important ISKCON center in England, and connections with one of the most famous musicians in the world, who became an ardent supporter of many ISKCON projects.

Another example of empowerment is Brahmananda Dasa. Srila Prabhupada asked this young disciple, who had no experience in book publishing, to find a publisher for Prabhupada’s Bhagavad-gita. Because Brahmananda dared to make the effort, he ended up securing the services of one of the top publishers in the United States.

Numerous other examples could be cited, including the building of Prabhupada’s Palace of Gold, a splendid, award-winning memorial to ISKCON’s founder-acharya in West Virginia. Today the Palace has the distinction of being designated a National Historic Place. And yet this beautiful, artistic memorial was built by disciples who began the project with little or no skill or experience in construction and architecture.

Consider also the many devotees who were sent to establish ISKCON centers in China, Africa, Europe, Australia, Japan, and elsewhere. Because of the dedication of these mostly young, inexperienced disciples who followed Srila Prabhupada’s instructions, the Krishna consciousness movement has hundreds of centers and thousands of followers in these places.

There are many examples of devotees who, in spite of feelings of inadequacy, have accepted responsibility to be instruments of growth and transformation in our movement. And because of their acceptance of these responsibilities, they are receiving mercy from guru and Krishna to become productive and committed leaders. Progress in devotional service does not depend on one’s material qualifications. Rather, success in devotional service depends on one’s sincerity and seriousness in following the instructions of the Lord and His pure representative.

Even today, Srila Prabhupada is asking his sincere followers to be leaders. He stated poignantly above, “I need leaders in this fight against maya.” In spite of our inadequacies and fears, each of us has a choice to accept the battlefield commissions that are still being given. To paraphrase an old Christian song that reflects this attitude: “If the Lord wants somebody, here am I. Send me; I’ll go. I may be poor, insufficient, weak, but I’ll take up the charge of being a spiritual warrior, trusting and praying that the divine energy will provide the intelligence and the strength because I am submitting myself to divine guidance.” This is called faith and surrender. And this is the faith and surrender that can produce outstanding leadership, outstanding results in the battle against maya.