When devotees of Lord Krishna venerate Shiva as the greatest devotee of the Lord, they are offering him the highest praise.

Devotees of Lord Krishna honor Lord Shiva for his celebrated qualities and his exalted status in the hierarchy of beings. 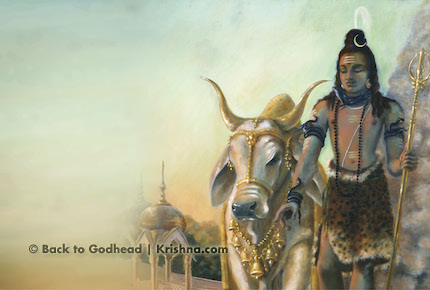 Lord Shiva is considered to be like yogurt (dadhi). Yogurt is nothing but transformed milk; nonetheless, yogurt cannot be accepted as milk. Similarly, Lord Shiva holds almost all the powers of Lord Vishnu, and he is also above the qualities of the living entity, but he is not exactly like Vishnu, just as yogurt, although transformed milk, is not exactly like milk. (4.30.24, Purport)

Lord Shiva is in charge of the tamo-guna, the mode of ignorance, and is thus in the category of incarnations known as gunavataras. Suta Goswami says, “The transcendental Personality of Godhead is indirectly associated with the three modes of material nature, namely passion, goodness, and ignorance, and just for the material world’s creation, maintenance, and destruction He accepts the three qualitative forms of Brahma, Vishnu, and Shiva.” (1.2.23) As the god of annihilation, Shiva is responsible for destroying the universes during the partial and complete devastations, which occur respectively at the end of each day of Brahma and at the end of his life.

Srila Prabhupada writes, “The dissolution of the three worlds is effected by the incarnation of darkness, Rudra [Shiva], represented by the fire of eternal time which blazes over the three worlds.” (3.11.28, Purport) Shukadeva Goswami says, “Thereafter, at the end of the millennium, the Lord Himself in the form of Rudra, the destroyer, will annihilate the complete creation as the wind displaces the clouds.” (2.10.43)

From being simple-hearted to being tricky, from being easily pleased to blazing with anger, Lord Shiva displays many facets of personality, all in the service of his dear Lord Sri Krishna. He exhibits dependence on Krishna and His devotees as well as surrender and service to them.

One of the prominent attributes of Lord Shiva is being quickly pleased with anyone. Amongst all the demigods, Lord Shiva can be pacified even by the lowest class of men, who need only offer him obeisances and leaves of a bael tree. Thus his name is Ashutosha, which means that he is pleased very quickly. Being Ashutosha, Shiva is approached by various types of beings – demigods, demons, pious and impious human beings, devotees of Krishna, and so on. However, as Lord Shiva knows the intentions of everyone, he tricks the demons, satisfies the materialists, blesses the simple-hearted with devotional service to the Supreme Lord, offers heartfelt benedictions to devotees, and associates with advanced devotees. In this way Lord Shiva blesses different people according to their position and at the same time exhibits his devotion unto the Lotus feet of the Supreme Lord.

Shiva’s Mercy on the Vaishnavas

Although Lord Shiva bestows benedictions upon devotees and demons alike, there is a gulf of difference in the way he blesses them. He is always pleased with the pure devotees of Lord Krishna, as he himself says:

“Any person who is surrendered to the Supreme Personality of Godhead, Krishna, the controller of everything – material nature as well as the living entity – is actually very dear to me.” (4.24.28)

How much he is pleased with Krishna’s devotees can be seen in how he sometimes appears before them even uninvited. For example, the Pracetas were the ten sons of Pracinabarhi, a king in the dynasty of Dhruva Maharaja. Before taking charge of the kingdom, they went to perform devotional austerities to please Lord Krishna. Knowing this, Lord Shiva came before them to bestow his mercy upon them by guiding them in devotional service. Thus He taught them the Rudra-gita. (Canto 4, Chapter 24) 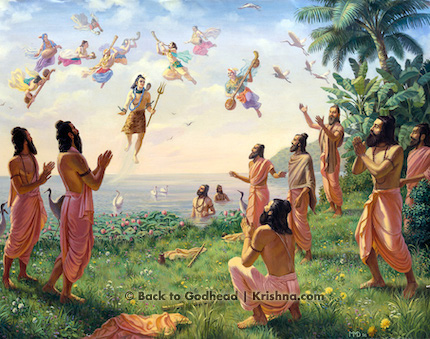 Similarly, Lord Shiva came to Markandeya Rishi, a great devotee of the Supreme Lord, glorified his devotional attributes, and gave him benedictions of knowledge, renunciation, realization of Krishna, and the post of spiritual master of the Puranas. (Canto 12, Chapter 10)

Shiva’s Mercy on the Demons

Although Lord Shiva is easily pleased and his mercy is easily available to Krishna’s devotees, demons and others have to undergo at least some endeavor to please him. He uses these demons to show his dependence upon his worshipable Lord Krishna. He also tricks them by offering them benedictions that seem to favor them but ultimately lead to their destruction. Shalva, Ravana, Bana, Jayadratha, and Kashiraja were among the various materialistic and demoniac people eventually destroyed even though they had summoned Lord Shiva by their austerities and received benedictions from him. Shiva appears before demons in an official capacity, as required by his post.

One example is the demon Vrikasura, who worshiped Lord Shiva by offering pieces of his own flesh as oblations into fire. When Shiva did not appear before him, Vrika prepared to cut off his own head. Then the supremely merciful Lord Shiva rose up out of the sacrificial fire and stopped him, offering him whatever boon he chose.

Vrika said, “May death come to whomever I touch upon the head with my hand.” 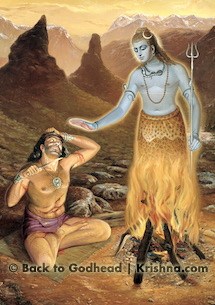 Upon hearing this, Lord Shiva seemed somewhat disturbed. Nonetheless, he was obliged to reciprocate and vibrated om to signify his assent, granting Vrika the benediction with an ironic smile, as if giving milk to a poisonous snake.

Wicked Vrika tried to test the benediction by putting his hand on Shiva’s head. Terrified, Shiva fled and finally reached Lord Vishnu in Shvetadvipa. Vishnu disguised Himself as a young student, went before Vrikasura, and bewildered him to put his hand on his own head, thus causing his destruction. (Canto Ten, Chapter Eighty-eight)

Another aspect of Lord Shiva’s personality is his anger. He exhibits anger as part of his position as the destroyer of the universe. His anger, however, is born out of his compassion as well as his intolerance in seeing conditioned souls wasting time by not taking to devotional service.

In an episode related in the Fourth Canto, Lord Shiva once exhibited anger toward Daksha, a leading progenitor in the universe. Although Daksha insulted Shiva at a great sacrifice, Shiva’s anger was aroused not because Daksha insulted him but because Daksha later caused the death of Sati, his own daughter and Shiva’s dear devoted wife. When Shiva heard from Narada Muni that Sati was now dead because of Daksha’s insulting her, Shiva became greatly angry and created Virabhadra from his hair and ordered him to kill Daksha. (Canto Four, Chapter Five) 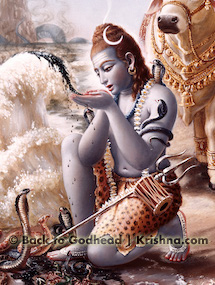 As a dutiful father and spiritual master of all beings, Lord Shiva uses anger to rectify people. In the context of the Daksha episode, he told Lord Brahma that he doesn’t take the offenses of the demigods seriously, but punishes them only to reform them as a teacher. (4.7.2) In this way Lord Shiva uses his anger in the service of the Lord to rectify the living beings and never for his own ends.

When the demigods and the demons churned the ocean of milk (Canto Eight), deadly poison came out in the beginning. Being helpless, they all took shelter of Lord Shiva, offering him fervent prayers. Always benevolent toward all living entities, Lord Shiva said to his consort, Sati:

It is my duty to give protection and safety to all living entities struggling for existence. Certainly it is the duty of the master to protect his suffering dependents.

People in general, being bewildered by the illusory energy of the Supreme Personality of Godhead, are always engaged in animosity toward one another. But devotees, even at the risk of their own temporary lives, try to save them. My dear gentle wife Bhavani, when one performs benevolent activities for others, the Supreme Personality of Godhead, Hari, is very pleased. And when the Lord is pleased, I am also pleased, along with all other living creatures. Therefore, let me drink this poison, for all the living entities may thus become happy because of me. (8.7.38–40)

Shukadeva Goswami relates, “Bhavani, who knew perfectly well Lord Shiva’s mood and capabilities, gave him her permission.” (8.7.41) Auspicious Shiva drank the poison for the benefit of everyone. The poison created a blue line on his neck that it is now accepted as an ornament of Lord Shiva.

“Great personalities almost always accept voluntary suffering because of the suffering of people in general. This is considered the highest method of worshiping the Supreme Lord, who is present in everyone’s heart.” (8.7.44)

Thus Lord Shiva’s attributes of mercy, anger, and benevolence and his various activities display his great character and devotion to the Supreme Lord Vishnu. In his great devotional ecstasy, he even holds on his head the water that emanates from the lotus feet of the Supreme Lord (the Ganges). He is the epitome of devotion to Vishnu, and thus is the topmost Vaishnava.