Keeping People in a Hellish Condition 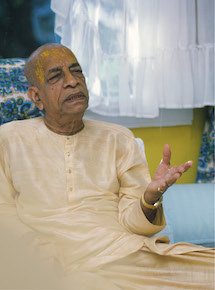 Disciple: Srila Prabhupada, the Gita verse we’ve just read [16.9] is very striking. Lord Krishna says that with their materialistic views, “the demoniac, who are lost to themselves and have no intelligence, engage in unbeneficial, horrible works meant to destroy the world.”

In reality, only a little karma, a little work, is required. You simply see to it, for instance, that some wheat is growing. A little tilling – that is sufficient.

Just a little work will provide people’s needs. Nature has given so much facility. You can grow a little food anywhere. The cows are there in the pasturing ground. Take their milk and live peacefully. Why do you open factories? What is the use? You are simply keeping yourselves in a hellish condition.

So this is the description given by Krishna in Bhagavad-gita. Now discuss these points.

Disciple: Srila Prabhupada, Krishna says demoniac leaders are engaging in unbeneficial, horrible works meant to destroy the world. And you said this statement anticipates nuclear weapons. These words of Krishna are so true.

Disciple: In college I was studying nuclear energy and thinking it would save the world – that by nuclear energy our leaders could give us bigger corn, bigger tomatoes, and . . .

Srila Prabhupada: Bigger deaths. The ultimate result of these rascals’ work is bigger deaths. Everything must be big. Formerly, during some conflict, only a few men were dying. Now, many hundreds of thousands will die. Bigger deaths. During your college days, you did not consider that these big leaders were bringing bigger deaths?

Disciple: In a way, Srila Prabhupada. It was very frustrating, because from every so-called good thing these people were trying to do, so many more bad things were coming forth.

Srila Prabhupada: Yes, intelligence. For example, after destroying a tree, you use your intelligence to construct a house. So you have intelligence. There is no doubt. A human being must have intelligence. But that intelligence is given to him for getting out of the clutches of birth, death, old age, and disease. Unfortunately, the so-called modern man is not using his intelligence for that purpose. Therefore, he is a dushkritina, a rascal.

Intelligence he has got. We don’t say that modern man is unintelligent, that he is a complete fool. No. He has got intelligence. But he is utilizing that intelligence for dushkarya, work which he should not have done.

There are karya and dushkarya, proper work and bad work. Man’s intelligence was given so that he could get relief from these clutches of birth, death, old age, and disease. But that intelligence he’s not utilizing. He’s opening a factory and creating a completely different atmosphere, a bad atmosphere. Therefore he is a rascal. To open a factory requires intelligence. All sorts of complicated machines have to be coordinated. So intelligence is there. But how is this intelligence being used? To keep people in a hellish condition of life. Therefore, modern man is a dushkritina, an intelligent rascal.

Disciple: Srila Prabhupada, it’s amazing. People have become so shortsighted. For instance, they open a factory for some kind of economic development, but they’re not thinking of the factory’s ill effects. Water pollution, air pollution, noise pollution, stress, broken families, delinquency, drugs, crime – so many things.

Srila Prabhupada: Therefore Krishna calls them dushkritinas, and then He calls them mudhas, asses.

Disciple: At the same time, Srila Prabhupada. Krishna also says, mattah smritir jñanam – “Everyone’s intelligence comes from Me alone.” So some might criticize that Krishna Himself is misleading people, giving people faulty intelligence.

Srila Prabhupada: You wanted to do something, so Krishna gives you the intelligence to do what you wanted. If you want to manufacture a very complicated machine. Krishna will give you that intelligence: “All right, do like this. Here is how to manufacture.”

But you’ll not hear Krishna when He says, sarva-dharman parityajya: “You rascal, give up all this and surrender to Me.” That is real intelligence. But you’ll not do it.