“We Are Not the Supreme Being” 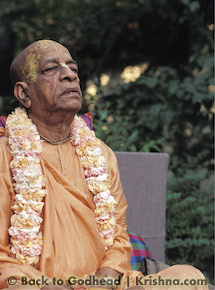 This conversation between His Divine Grace A. C. Bhaktivedanta Swami Prabhupada and reporters took place in Melbourne, Australia, on June 29, 1974.

Reporter: Your Divine Grace, you’re saying we can see the Lord only by consulting the scriptures and the succession of bona fide spiritual masters. But supposedly, Lord Krishna is eternal, or indestructible. So surely He must be existing today. Which means we should be able to see Him now.

Reporter: So we need divine light.

Srila Prabhupada: Whatever it may be. The thing is, although the sun is always existing, you require qualification to see the sun at night. Similarly, although Krishna always exists, you must be qualified to see Him in the night of this material world.

That qualification is described in the Brahma-samhita: premanjana-cchurita-bhakti-vilocanena santah sadaiva hridayeshu vilokayanti. Those who are saintly persons and in ecstatic love with Krishna – they are seeing Him twenty-four hours a day. That is not very difficult to understand. If you love somebody, you are seeing him or her always. Is it not?

Srila Prabhupada: So seeing Krishna requires the qualification of love. Then Krishna will be visible twenty-four hours a day. He’ll talk with you. These things are described. Tesham satata-yuktanam bhajatam priti-purvakam dadami buddhi-yogam tam: “To those who are constantly devoted to serving Me with love, I give intelligence.” That means He talks. “I give intelligence.” Unless He talks, how can He give intelligence – “You do this”? So you have to qualify yourself to see and hear Krishna. But Krishna is always present.

Reporter: Your Divine Grace, there are many swamis and gurus and religious people throughout the world. How does one know which is the true guru – the one who can help one qualify oneself to see and hear Krishna?

Srila Prabhupada: One who knows Krishna – he is the true guru. Otherwise, he’s a rascal. That’s all.

Reporter: But what is the test of a true guru?

Srila Prabhupada: He will describe about Krishna. He will ask you to become a devotee of Krishna. His business is to propagate consciousness of Krishna. That is the symptom of the guru.

Reporter: Srila Prabhupada, if we don’t know what Krishna is and still we get a bona fide spiritual master, then what do we call that? Our good fortune?

Srila Prabhupada: Yes. That is stated in Chaitanya-charitamrita: brahmanda bhramite kona bhagyavan jiva guru-krishna-prasade paya bhakti-lata-bija: “The living entity is wandering throughout the universe, life after life. By the mercy of the guru and Krishna, he gets the seed of devotional service to the Lord.” [To disciple:] Read the explanation given in The Teachings of Lord Chaitanya.

Disciple: “Within this brahmanda, or universe, there are innumerable living entities, and according to their own fruitive activities they are transmigrating from one species of life to another, and from one planet to another. In this way their engagement in material existence is being continued since time immemorial. The living entities are atomic parts and parcels of the Supreme Spirit. There is, however, a measurement for the length and breadth of the atomic spiritual spark. It is said in the commentary to Srimad-Bhagavatam (10.87.36) that if you divide the tip of a hair into one hundred parts, and again if you divide one part of that into another one hundred parts, such one-ten-thousandth part of the tip of a hair is the length and breadth of the individual soul. This is also confirmed in the Vedas, in the Svetashvatara Upanishad.

“The atomic magnitude of the individual living entity is again described in the Srimad-Bhagavatam (10.87.30), as follows: ‘O Supreme Truth! If the living entities were not infinitesimal living sparks of the Supreme Spirit, then each minute spark would be all-pervading, and there would be no necessity of its being controlled by superior power.'”

Srila Prabhupada: That is very important. Otherwise, if you the living entity were equal to the Supreme Being, then, for example, you could talk of everything that is going on in another’s mind or body. But you cannot say what I am thinking. I cannot say what you are thinking. Therefore, you and I are not all-pervading. We are limited. That is the position of the living entity. This is a very nice example. [To disciple:] Go on.

Disciple: “‘But if the constitution of the living entity is accepted as being the minute part and parcel of the Supreme Lord, then automatically he becomes a controlled living entity under supreme energy or power. This is his constitutional position. Therefore, if he remains as he is created in that natural position, he can attain full freedom.'”

“I am supreme. By meditation I have become God?”

But if you are God, then how have you become a dog?

Srila Prabhupada: So some so-called gurus do say that. I am talking about that “some.” Not all of them are foolish. So these foolish persons – they say that “I am God, you are God, everyone is God.” That is foolishness. We are not God. We are part and parcel of God. We are qualitatively one with Him – but we are not the Supreme Being.