The monkeys helping Lord Rama in His search for Sita Devi provide a clear example of what cooperation can achieve.

Being the best we can be requires an honest appraisal of our strengths and weaknesses. 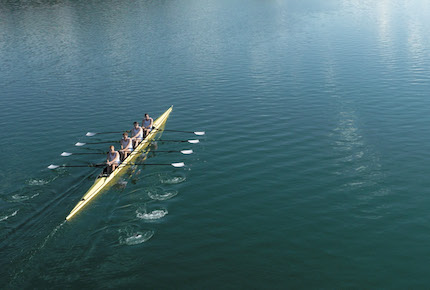 We all have limitations, things we can’t do well or at all. Acknowledging our limitations is vital for self-acceptance, which in turn is essential to avoid negative emotions such as resentment and envy. By self-acceptance we can focus our energies on creating a good life for ourselves within the constraints of our limitations.

How can we come to such self-acceptance? How can it open new doors for us? Why is it so difficult? Let’s analyze all this based on an incident from the Ramayana.

The Ability to Admit Our Inability Is Humility

The Ramayana depicts an incident when the monkeys serving Rama were brought brutally face to face with their limitations. While they were searching for Sita, they survived many dangers until they finally came to know her whereabouts: she was held in captivity by the demon king Ravana in his island fortress of Lanka. Delighted, they roared and ran toward the ocean. But when they came to the coast and saw the vast ocean extending unendingly into the horizon, their voices fell, as did their spirits. How could they cross this ocean? They looked at each other with growing apprehension. Much as they wanted to serve Rama by reaching Sita and conveying Rama’s message to her, they realized they just couldn’t cross the ocean. 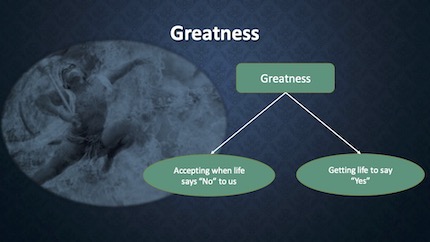 Trying to bolster the team of monkeys, their young leader, Angada, said, “I’m sure many of us can scale this ocean. Tell me, monkeys, how far each of you can jump.”

Hesitatingly, the various monkeys started telling their capabilities, but none of them could leap all the way to Lanka. Jambavan, the oldest member of the team, said, “When I was young, I could leap across the whole earth. But now that I have aged, I can’t leap even up to Lanka.” Finally, Angada said, “I might be able to jump to Lanka, but I don’t know if I will have the strength to jump back all the way.”

Jambavan responded immediately, “You are our prince. You shouldn’t go; one of us should go.”

But who would that one be? That question troubled and disheartened all the monkeys. 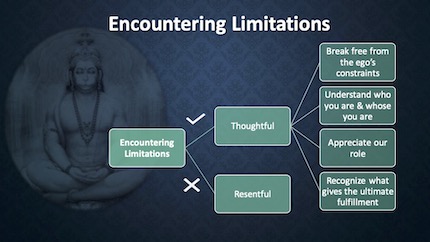 Through all this discussion, Hanuman remained silent. How Jambavan reminded him of his phenomenal prowess and how he achieved mission impossible is another story. Here, let’s stick to the point that the monkeys, despite being determined to do their best and despite being on a mission to serve God Almighty, still faced inescapable limitations. They all had the honesty to admit their inability. Indeed, the ability to admit our inability may well define humility.

Today’s culture often glamorizes pushing against all limitations, breaking free of them, and achieving the impossible. “The sky is the limit,” say some. “Even the sky is not the limit; we have gone beyond the sky and conquered space,” say others in a competitive game of bashing limitations.

Such slogans sound great. Sometimes they can help us bring out our best. Amidst life’s routine course, we all tend to settle into a comfort zone and avoid things that are difficult. By such lethargy or complacency, we may overlook our hidden strengths. History shows that many people have, by stretching themselves, achieved several things that were earlier deemed impossible.

Though we may be able to stretch ourselves beyond our own estimate, still, we aren’t unlimitedly stretchable. Just as an elastic band breaks when stretched too much, we too break down if we try indiscriminately to do the impossible. If we can lift 25 kg but try to lift 50 kg, we may well break our bones.

Accepting our limitations is relatively easier with regard to physically tangible tasks such as weightlifting. But it’s much more difficult where parameters aren’t so clearly quantifiable. We may rush into things we aren’t suited for, believing we can do anything if we just resolve to. Such a belief sets us on a collision course with reality. If we have been led to believe that we can do whatever we resolve to do, but then find ourselves unable to do a particular thing, we may well conclude that something is intrinsically wrong with us. We see our inability not just as a circumstantial limitation but as a flaw in our core identity. Such a negative self-perception can lead to depression, an inferiority complex, and suicidal urges.

If we compare life to a sport, then life is largely a team sport, not an individual sport – most of our life’s key responsibilities or aspirations require other people’s active involvement.

Suppose we are working on a major project wherein something very important needs to be done. That doesn’t necessarily mean we will be the one to do it. In a team, we all have our particular roles to play. During some phases of the match of life, we may have less prominent roles than others. If we all clamor for the most important role, especially when we don’t have the necessary ability, we will end up hurting our prospects as well as the team’s prospects.

Suppose one of the monkeys who didn’t have the ability to leap across the ocean had claimed to have that capacity. Though that monkey might have temporarily got the recognition of being the special one who took up what no one else could, eventually he would have ended at the bottom of the ocean, dead. Moreover, the team’s task of finding Sita would have been delayed or even thwarted. To prevent such unnecessary fiascos or disasters, the monkeys needed to put the task and the team first. And that’s what they did.

Of course, we live in a competitive world. To further our ambitions we may want or even need to stake our claim to be the best among our peers. But if we aren’t actually the best, we may well be acting in delusion. Being ambitious to change reality may be desirable, but being foolhardy and denying reality isn’t. Counterintuitive as it may seem, accepting our limitations can be empowering, for it stops our denial of reality. Even if reality is changeable, it is not deniable.

When we find ourselves in situations where our limitations stop us, we may respond in various ways, many of which may be unhealthy. One such unhealthy way is the denial of reality. We may claim to others or even believe ourselves that we can do things we can’t do. But by denying reality, we don’t change it; we just set ourselves up for an ugly collision with it, ending up shattered or at least battered.

Better to accept the reality, not in a mood of defeat, but in a mood of a strategic suspension of hostilities so that we can resume more effectively at a more opportune time. Accepting reality stops our fruitless fight against an unchangeable present and frees our energy to change the future.

What is of critical importance at present is the purpose of the team. We need to move the team’s purpose forward, even if the mover is someone else. If that member’s expertise leads to the success of the team, we too will succeed as members of that team. Later on, when some opportunity comes in our niche, we too may be able to play a prominent role.

Play for the Team, Not the Gallery

Despite their particular limitations, the monkeys had one great strength: they were centered on serving Rama, not on taking credit for doing the most visible service to Rama. Similarly, if we focus on the bigger picture of what we want to achieve together and why, we won’t get carried away by the urge to be the sole or primary achiever ourselves.

During the war, all these monkeys got their day; they fought heroically and rendered memorable service to Rama. But they were able to see that day, even be alive to see that day, because they accepted the reality that they couldn’t leap across the ocean.

Their willingness to accept what they couldn’t do freed them to do what they could, even in that moment. When Hanuman remembered his great power and leapt to Lanka, the remaining monkeys didn’t sit idly. They decided to help him by doing austerities and offering him the results of those austerities. They resolved to stand on one leg until he returned. That was no small resolution, because they had no idea how long it would take for him to return. Instead of resenting their inability or envying Hanuman’s ability, they focused on leveraging whatever ability they had to assist the one with the necessary ability to meet the challenge.

If teams could function with such synergy, they would be much more effective. In team sports, some players are star performers. But for them to shine, other players need to give them the necessary space and support. If the other players try to usurp the star performer, the most probable result will be that they will fail and their team will fail.

Be Thoughtful, Not Resentful

When we face limitations, we can become either resentful or thoughtful. If we become resentful, we compound the constraints imposed by our finite capacity with further constraints imposed by our negative mentality. But if we become thoughtful, we can re-envision that encounter with our limitation as an opportunity. Opportunity for what? To break free from the constraints of ego that make us believe we are something we aren’t.

To go beyond the ego, spiritual self-understanding can be especially empowering. Spiritual knowledge helps us understand that we are at our core spiritual beings. Each one of us is a part of the Whole. And that Whole engages all of us in a team effort, akin to an orchestra. In this team, we all have our place and purpose commensurate with our abilities. Pertinently, the Bhagavad-gita urges us twice (3.35, 18.47) to stick to our role and not jump to others’ roles just because those roles look better.

Ultimately, all abilities come from the Whole (Gita 7.8). When we strive to live in harmony with the Whole, we are given from within the intelligence to act wisely (Gita 10.10). With such inner guidance, we can better understand which limitations to push against and which to live within – and correspondingly, when to play a supportive role and when to take a prominent role.

By playing our part, we enter into a life of meaning and purpose, which is far more sustainably nourishing than the euphoria of an occasional special achievement, which may or may not come our way regularly. When we play our part in a mood of service to the Whole, we relish sublime spiritual fulfillment. When Hanuman returned victoriously after meeting Sita, all the monkeys celebrated; his success was their success too.

Being thus fulfilled, we gradually understand that the things that matter most don’t depend on our abilities; they depend on our consciousness, our character, our commitment – things we can develop, despite our inabilities.

By thus accepting ourselves for who we are presently, we can concentrate our energies on becoming the best we can be eventually.