Prepare to Go to Krishna

Prepare to Go to Krishna

Srila Prabhupada explains that only the foolish person doesn’t know that we are all on the threshold of death.

By His Divine Grace A. C. Bhaktivedanta Swami Prabhupada, Lecture given in Los Angeles on May 19, 1972

“Sri Shukadeva Goswami said: Maharaja Parikshit, as you have inquired from me as to the duty of the intelligent man who is on the threshold of death, so I have answered you.” – Srimad-Bhagavatam 2.3.1 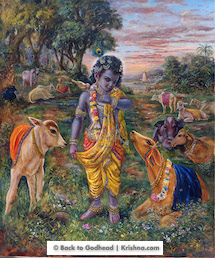 Nobody can say, “I shall live for so many years.” No guarantee. Everyone is on the threshold of death. Any moment we can die. Therefore it is said, “As sure as death.” All other things may be not sure, but death is sure. 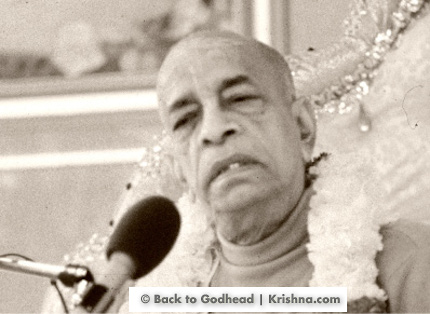 Therefore it is said here manushyeshu manishinam. Not ordinary men. Manishi. Manishi means thoughtful. They ask, “What is to be done now, before death comes? Shall I die like cats and dogs, or shall I die like a human being?” This is the question. When cats and dogs die, nobody cares. But when a human being dies, there are so many ceremonies, there is mourning, because human life is important.

Parikshit Maharaja was cursed to die, but he was given seven days’ time: “You, King, shall die after seven days, being bitten by a serpent.” This was the curse given to him. He accepted it. He could have counteracted it. He was a Vaishnava. He was very powerful. But he thought, “Yes, I am an offender. The brahmana boy has cursed me; I shall accept it.”

He prepared himself for death. For seven days he placed himself on the bank of the Ganges without drinking a drop of water, and for seven days he continuously heard Srimad-Bhagavatam from Shukadeva Goswami. That was decided. In any circumstances of life, hearing and chanting is prescribed.

Shukadeva Goswami said, “My dear King, I have explained to you what is to be done now, at the time of death.”

“Day after day countless living entities in this world go to the kingdom of death. Still, those who remain aspire for a permanent situation here. What could be more amazing than this?” (Mahabharata, Vana-parva 313.116) Yudhishthira Maharaja was asked by Dharmaraja, “What is the most wonderful thing within this world?” He answered this way: ahany ahani bhutani gacchantiha yamalayam. “Everyone, at every moment, is going to the place of Yamaraja, the superintendent of death, where a man’s life, what he has done, is scrutinizingly studied.”

I say “a man’s life.” Not an animal’s life. Animals have no such thing as “wrong” or “right.” But a human being must have this conscience, “right” or “wrong.”

Duty and Not Duty

Therefore this particular word is mentioned here, manishinam. In human society those who are specifically intelligent, it is for them. The author of Chaitanya-charitamrita writes, krishna yei bhaje sei bada chatura. Chatura means very intelligent. Without being intelligent, nobody can take to Krishna consciousness. Our mission is to educate people to become intelligent. They are foolish. They do not know the value of life. They do not know what is going to happen after death. No. Just like cats and dogs.

Therefore the Gargopanishad says, etad viditva yah prayati sa brahmanah: “One who leaves this body after knowing everything is a brahmana.” And etad aviditva yah prayati sa kripanah: “Anyone who dies without knowing the value of life is a kripana, a miser, cripple-minded,” because he could not utilize the opportunity given to him by nature. You American boys and girls – nice country, good facilities, no poverty – everything is very nicely given to you. But if in spite of all these facilities you don’t take to Krishna consciousness, then you are kripanas, misers.

“Miser” means one who has got money but cannot utilize it. He is a miser. There are many merchants who get a few thousand dollars from their father, but due to intelligence they increase it to millions of dollars. That is intelligence. And miserliness, or foolishness, is that I get some money from my father, but I spend it for nothing.

This human form of life is specially meant for becoming a brahmana. We are therefore creating brahmanas. We are not creating shudras. Sudras are already there. Janmana jayate shudrah. Anyone born is a shudra. Sudra means one who has no knowledge, who is ignorant. He is called a shudra.

A brahmana will not engage in anyone’s service. That is specially forbidden. Even if he is in difficulty, a brahmana should not accept anyone’s service like a dog. This word is especially used. A dog cannot live without a master. A dog, if he hasn’t got a good master, is a street dog. He may be killed at any time. He has no protection. Therefore this very word is used. Sudra means like a dog. He must have a master; otherwise he cannot live.

There are different classes of men. Sudras must have protection. Woman must have protection because they cannot do anything independently. To give them independence means to create some trouble. In the Manu-samhita it is clearly said, na stri svatantryam arhati. Women cannot be given independence. No. They must be protected. When a girl is a child, up to twelve years, thirteen years, say fifteen, sixteen years, not more than that, she must be protected by her father. And at the age of thirteen to sixteen years, she must be married. The father must find out some boy who can take charge of her, the second charge. And when she’s old, the charge is given to the elder sons. A woman is protected like that.

Sudras also should not be given independence. They should be given protection, but no independence. In the Bhagavad-gita it is said, striyo vaishyas tatha shudras. Striyah means woman. Women, shudras, and vaishyas are put into the same category.

Janmana jayate shudrah. Everyone is born a shudra. Samskarad bhaved dvijah. By samskara, reformation, one becomes a dvija, “twice-born.” We follow this principle in the Krishna consciousness movement. Not that all of a sudden we accept anyone as a brahmana. We give samskara in the form of chanting and other things. First of all comes association. By good association, by the association of devotees, one can understand automatically what is God, what is Krishna.

Traditionally the shudras were not given any samskara, because it is very difficult for those in the very lowest stage of life to accept samskara, the reformatory method. But this Krishna consciousness movement, under the direction of the Six Goswamis and the pañcharatra system, is giving everyone the opportunity to become a brahmana because without becoming a brahmana nobody can understand what is Krishna or what is Krishna consciousness.

“Sri Krishna, the Personality of Godhead, who is the Paramatma [Supersoul] in everyone’s heart and the benefactor of the truthful devotee, cleanses desire for material enjoyment from the heart of the devotee who has developed the urge to hear His messages, which are in themselves virtuous when properly heard and chanted.” (Bhagavatam 1.2.17)

Hridy antah-sthah. Krishna is within your heart. If you kindly continue to hear about Him, as you are doing, then Krishna will be very much pleased. “Oh, this person is now interested in Me.” Because nobody’s interested in Krishna. So Krishna is also silent to them. But as soon as you become interested, oh, Krishna becomes very active. “Oh, he’s trying to do something. I shall help him.”

“To those who are constantly devoted to serving Me with love, I give the understanding by which they can come to Me.” Krishna is silent for the nondevotees, but He speaks to the devotees. That is very natural. A big man talks with men who are intelligent, who are businesslike. Why should he waste his time talking with some rascals and fools? So Krishna talks, but He talks to the devotees. Who are devotees? Satata-yuktanam bhajatam priti-purvakam. Those who are twenty-four hours engaged in rendering loving devotional service to the Lord. To such persons Krishna gives intelligence, not others.

This process of hearing from Srimad-Bhagavatam, Bhagavad-gita, must be continued. That is our life. Sravanam kirtanam vishnoh.

Sravanam means hearing. Kirtanam means chanting about Lord Vishnu, not others. “Now I am hearing and chanting about Nixon.” [Chuckles.] That will not help. Everyone is busy with the newspaper. “What has Nixon said, what is he doing . . .” Everywhere.

The politicians have made the minds of the general public very much interested in what the politician says. Every day people see that the politicians are simply speaking all nonsense; still they’re interested. Punah punash carvita-carvananam (Bhagavatam 7.5.30). This is called “chewing the chewed again and again.” By the laws of material nature, we are all bound up tight, hands and legs. We cannot neglect the laws of nature. If you eat a little more than you should, then you have to fast for three days. That we actually know. If you expose yourself a little too much to cold, then you have to pay ten dollars to the doctor – a fine.

It is just like one blind man telling other blind men, “Please follow me. I shall lead you to the right path.”

“But you are blind yourself, and we are also blind. What will be the help?”

But no, they will follow. In our country Gandhi promised, “I shall give you independence in one year if you follow me – nonviolence, noncooperation.” People followed, but it took thirty years. But actually, that is not independence. So these politicians, especially, mislead us. Not only politicians – the so-called yogis as well.

Krishna and Chaitanya: The Same Message

“Abandon all varieties of religion and just surrender unto Me. I shall deliver you from all sinful reaction. Do not fear.” (Gita 18.66) Krishna is saying, “Give up all other occupations, other duties. Simply surrender unto Me. Don’t hesitate. Do it.”

Krishna is personally canvassing. He’s so kind that He comes personally. He speaks the whole truth in the Bhagavad-gita. He’s canvassing, “Please do it.”

Our business is not very difficult if we follow, if we surrender to Krishna fully and teach others the same thing. No adulteration. No. Exactly what Krishna says. Then you become a spiritual master, a guru. Chaitanya Mahaprabhu says,

“Under My order, become a spiritual master and deliver the people of your country.” (Chaitanya-charitamrita, Madhya 7.128) And what is that order? Yare dekha tare kaha krishna-upadesha: “Whomever you meet, simply speak to them what Krishna has said, or what is spoken about Krishna.” That means Bhagavad-gita and Srimad-Bhagavatam.

Therefore sometimes people say in India, “Swamiji, you have done a wonderful thing.” I do not know. I’m not a magician. But I am confident that I did not adulterate the words of Krishna. That’s all. That’s my credit. I did not like to take the position of Krishna. I remained the servant of Krishna, and I spoke what Krishna said. That’s all. This is my secret.

Everyone can do that. There is no magic. The magic will act as soon as you become a pure devotee of Krishna. The magic will be done by Krishna, not by me or you. He will do it. It is just like a small child: Nobody can hurt him; the father will take care of him. He does not know anything. He’s simply depending on his father: “My father, mother,” that’s all.

Krishna says, “Surrender unto Me; I’ll give you protection.” He’s not a liar. He’s not inefficient. He’s strong. He’s sufficiently opulent. He can do that. Believe in Krishna’s word and surrender unto Him. Don’t spoil this human form of life. Death is sure. Before death, we must prepare to go back to home, back to Godhead.