Until we realize our spiritual identity, we’re essentially asleep.

From a Krishna conscious perspective, we may be dreaming far more than we know. 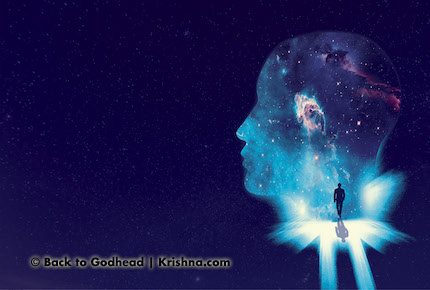 According to Krishna conscious scriptures, we have three states of consciousness:

None of these states of consciousness – wakefulness, dreaming, and deep sleep – are substantial, as all three are simply displays of various phases of material life, which is temporary. In that sense, all three states are dreams because the lasting reality is that each of us is an eternal soul temporarily inhabiting a material body and mind. Srila Prabhupada explains: “You are taking this day dream as reality because the duration is long. At night when you dream, the duration is for half an hour. And this [day dream] is for twelve hours, or more than that. That is the difference. It is a twelve hours’ dream, and that is half an hour dream. But actually, both of them are a dream. And because it is a twelve hours’ dream, you are accepting it as real. That is called illusion.” (Morning Walk, January 9, 1974, Los Angeles)

In other words, our material body and mind are temporary while we, the eternal soul who animates the body and mind, are eternal. Thus our material body and mind are something like a passing dream. In a dream we suffer because we’re chased by an attacker, but actually there is no attacker. We have created some situation in a subtle form and suffer the consequences, but a person who’s awake knows that there’s no attacker. The attacker is a myth for both the person dreaming and the person awake, but the sleeping person takes the myth as reality; the awakened one knows better.

When we awaken from a dream, we separate ourselves from the activities we had in the dream; we realize that those activities were mental concoctions. Similarly, when we’re liberated from the material concept of life – that is, when we awaken to our spiritual identity – we become free of the bodily concept of life. Then, no longer identifying with the gross or subtle material bodies, we are relieved of both our nighttime and daytime dreams. We’re no longer affected by the happiness and distress of material life.

Srimad-Bhagavatam (3.27.25) says, “In the dreaming state one’s consciousness is almost covered, and one sees many inauspicious things, but when he is awakened and fully conscious, such inauspicious things cannot bewilder him.” In the purport that follows, Srila Prabhupada explains:

In the condition of dreaming, when one’s consciousness is almost covered, one may see many unfavorable things which cause disturbance or anxiety, but upon awakening, although he remembers what happened in the dream, he is not disturbed. Similarly the position of self-realization, or understanding of one’s real relationship with the Supreme Lord, makes one completely satisfied, and the three modes of material nature, which are the cause of all disturbances, cannot affect him. In contaminated consciousness one sees everything to be for his own enjoyment, but in pure consciousness, or Krishna consciousness, he sees that everything exists for the enjoyment of the supreme enjoyer. That is the difference between the dream state and wakefulness. The state of contaminated consciousness is compared to dream consciousness, and Krishna consciousness is compared to the awakened stage of life.

With a bit of introspection we can discern that we, the spirit soul, are different from the body and mind that experience the three states of consciousness: We perceive that in jagrata, or the awake state, we enjoy or suffer the characteristics of our material body. Similarly, in svapna (dreaming state) we enjoy or suffer similar experiences within the mind. And in sushupti (deep dreamless sleep) we are unaware of everything. By remembering and contemplating our succession of wakefulness, dreaming, and deep sleep, we realize that we are observing these three states. We remember, “I saw so many things in my dream, and then my dream ended and I didn’t see anything. Now I’m waking up.” Therefore, we are ultimately the experiencing agent, or the seer – a separate, transcendent observer – of all three phases of consciousness. In this way we realize that our actual identity is separate from the material body and mind.

Once we even theoretically accept that we are a spiritual being separate from and transcendental to the temporary body and mind, then, in spite of being within a material body, we will be less disturbed by the happiness and suffering of that body. We’ll begin to see material experiences in the same way a person who has just awakened from a dream sees his or her dream experiences. By properly identifying ourselves as Krishna’s eternal servant, we’ll become relieved of our false material identity, and then the miseries of illusory existence will lessen, just as the anxiety of a troublesome dream lessens as soon as we awaken.

Sometimes in a dream we imagine that we have awakened; similarly, we may consider ourselves conscious of our eternal identity as Krishna’s part and as His servant, but if we remain absorbed in material life rather than in devotional service to the Supreme Lord, we are actually still dreaming. In Krishna’s words, “According to My instructions, one should fix the mind on Me alone. If, however, one continues to see many different values and goals in life rather than seeing everything within Me, then although apparently awake, one is actually dreaming due to incomplete knowledge, just as one may dream that one has wakened from a dream.” (Srimad-Bhagavatam 11.13.30)

Another way to look at our situation in this world is to consider that Krishna is eternal, we are eternal, and our dealings with Krishna are also eternal; our relationship and exchange of loving service with Krishna are eternal. But somehow or other we have allowed that relationship to be interrupted by maya (illusion), which is called svapna, a dreamlike state. As a dream is not factual – it’s a hallucination – similarly our detachment from Krishna is also a hallucination.

At any moment we can revive our Krishna consciousness simply by waking up to the fact that “I have nothing to do with anything material. I am Krishna’s servant.” When a nightmare becomes intolerable, we break it; similarly, we can break our material connection at any moment and awaken to the fact that we never were separated from Krishna. Our original and eternal position is that we are always with Him. As soon as we forget this, illusion is there, just as, when we sleep, we dream.

Srila Prabhupada instructed his followers not to take their dreams very seriously; he wrote in a letter that they were “not very important matters.” He continued: “But if we occasionally dream of Krsna, that is nice. That means you are making advancement in Krsna Consciousness. But do not take such things very seriously. The important business is to become conscious of Krsna all the time by absorbing the mind, body, and words in pleasing Krsna, and that means following strictly the regulative principles and practices of devotional service, such as chanting, reading, attending arati, going for street sankirtana, like that, and engaging oneself full time in some work for Krsna. In this way, you will become too much busy serving Krsna.”

Prabhupada explained that one who’s spiritually advanced will dream of Krishna and sometimes receive instructions from the Lord or His devotee in his or her dreams: “Sometimes He tells His devotee in a dream that His temple and His garden are now very old and that He cannot enjoy them very nicely. Thus He requests the devotee to repair them. Sometimes He is buried in the earth, and as if unable to come out Himself, He requests His devotee to rescue Him.” (Bhagavatam 6.19.5, Purport)

Srila Prabhupada once gave a personal account of such dreams that he had had:

In my family life, when I was in the midst of my wife and children, sometimes I was dreaming my spiritual master, that he’s calling me, and I was following him. When my dream was over, I was thinking, I was a little horrified. “Oh, Guru Maharaja wants me to become a sannyasi. How can I accept sannyasa?” At that time, I was feeling not very satisfied that I have to give up my family and have to become a mendicant. At that time, it was a horrible feeling. Sometimes I was thinking, “No, I cannot take sannyasa.” But again I saw the same dream. So in this way I was fortunate. My Guru Maharaja [Prabhupada begins to cry, choked voice] pulled me out from this material life. I have not lost anything. He was so kind upon me. I have gained. I left three children. I have got now three hundred children. (From an impromptu talk in Seattle, 1968, after Prabhupada learned of the passing of his godbrother Bhaktiprajñana Keshava Maharaja)

As a devotee’s “dream” is in fact a spiritual reality, the Lord’s dream is the reality for all of us, for this entire creation is the dream of God, Maha-Vishnu, a plenary expansion of Krishna.

The Brahma-samhita (5.47) describes, yah karanarnava-jale bhajati sma yoga-nidram ananta-jagad-anda-saroma-kupah: “I adore the primeval Lord Govinda who, reposing in the Causal Ocean with the infinity of the world in the pores of His hair, enjoys creative sleep [yoga-nidra].” In His sleep, the Lord manifests this entire creation. In other words, this creation, which we take as reality during our jagrata phase, is the Lord’s dream.

“In the illusion of his dream,” Srila Prabhupada’s disciples write in their purport to Srimad-Bhagavatam 10.86.45, “a sleeping person creates an apparent world, complete with cities populated by the fictional products of his imagination. In somewhat the same way, the Lord manifests the cosmos. Of course, the creation is not illusory for the Lord, but it is for those souls who are put under the control of His Maya potency. As her service to the Lord, Maya deludes the conditioned souls into accepting as real her temporary, insubstantial manifestations.”

The Lord, however, as the supreme creator of the material worlds, is unaffected by them and all that occurs within them. Similarly, a self-realized person, or a devotee, knowing well that this material cosmic manifestation is a temporary, illusory creation, is unaffected by it and all that goes on within it. The material world is like a phantasmagoria, but behind this creation there is reality – the spiritual world. A devotee is interested in that spiritual world, where everything and everyone is awake and free of all illusions.