The story of how Jagannatha, Baladeva, and Subhadra made their way to the home of a family in the UK.

After many years of living in obscurity, Lord Jagannatha invites a devotee couple into His service in a most unlikely way. 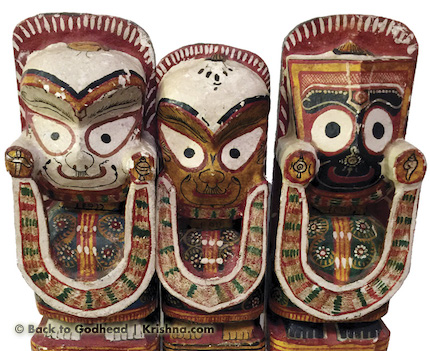 Tuesday, 9 January 2018. I was reading the book Chasing Rhinos with the Swami, by Shyamsundar das, and decided to stop for a break and watch a television program called Antiques Road Trip, where two antique experts compete against each other. They get a budget of £200 at the beginning of their road trip with which they buy antiques and collectables. At the end of the trip, the items are sold at an auction. The winner is the person who manages to accumulate the most profit after selling the antiques/collectibles. Over a number of days they travel the length and breadth of the U.K. visiting various antique shops to find bargains. I have always been fascinated by the stories behind the antiques they find.

As I was watching this episode, I caught a glimpse of something that looked very familiar. I had to rewind the program and pause the screen. I was shocked. It looked like Lord Jagannatha and Subhadra Devi with what appeared to be part of Lord Baladeva’s head behind them.

I took a photo and sent it to a few devotees to make sure, and within a few minutes it was confirmed with a simple message: “Jai Jagannatha!” 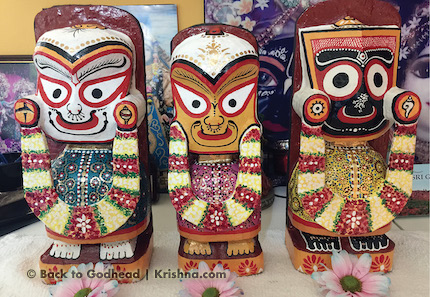 The narrator of the program mentioned the name of the antique shop and the area it was located in. I went to the Internet and found a contact number for the shop and rang to make an enquiry. The owner of the antiques shop answered my call. When I mentioned the Antiques Road Trip episode, he pointed out that it had been filmed over a year and a half earlier and so he was unsure whether many of those antiques in the shop would still be available. He explained that antiques stock is regularly rotated, especially if they are not selling.

He asked me to describe what I had seen, and so I described Lord Jagannatha. The owner couldn’t remember if they had already been sold and decided to check. I recall the eerie silence on the phone as I waited. Within a few minutes he came back.

“You’re in luck. The tribal masks are still there.”

My initial thought was Did he say tribal masks? 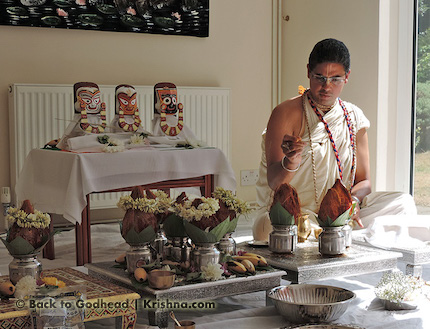 At this point I simply wanted to know more about them. Where had they come from? How old were they? Unfortunately, he didn’t have the answers to these questions and said that they belonged to another antiques dealer. He suggested I call that dealer the following day.

He finished the conversation by saying, “I suspect that these tribal masks are from Africa or South America.”

I was really intrigued at this point and had many more questions, but I knew I had to simply wait to contact the dealer the next day. 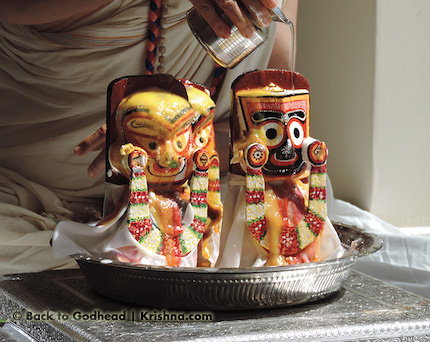 What happened that night is difficult to explain. I had a recurring dream that Lord Jagannatha Himself was calling me to come and get Him. I distinctly remember Lord Jagannatha’s words telling me, “I am waiting for you to serve Me.”

The following day I was unable to explain this to anyone, but I had an intense desire to retrieve Their Lordships as soon as possible and begin serving them.

Wednesday, 10 January 2018. I was feeling quite apprehensive as I rang the antique dealer who owned the deities. When I eventually made contact, the story became more fascinating. The dealer said he was now retired but had been in the navy for many years, traveling all over the world. Every country he was stationed at, he would buy various items. Now, in his retirement, he was selling most of these. He said he had bought the tribal items (as he described the Jagannatha deities) from an elderly woman in her eighties or nineties in Costa Rica, Central America, while he was stationed there. She’d had the deities for many years, but he could not remember how long. She had acquired them from local village people in Costa Rica. I wondered how long these deities were with the people in the village and, more important, how they got to Costa Rica. 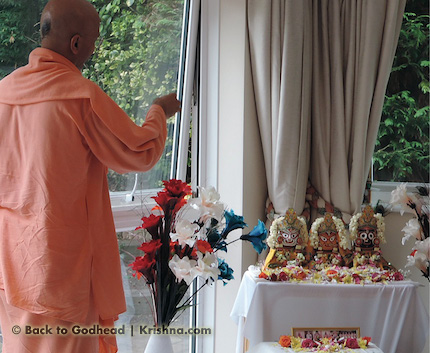 After the dealer bought the items from the woman, he kept them in his loft for over forty years, along with the other “tribal artifacts.” He said that he and his wife had “taken a liking” to these items and so had kept them longer than any of his other antiques. The couple were simply captivated by the way they looked.

I expressed an interest in buying the deities, we agreed on a price, and he suggested he could post them to me, as the antique shop was quite far away (in the county of Somerset, while I was in Berkshire). I proposed that my wife and I would be more than happy to collect them. The date for collection was agreed upon: Saturday, 13 January.

What followed was a series of sleepless nights with the same recurring dream where Lord Jagannatha was calling me to come and get Him and then serve Him.

During the day, I was constantly contemplating on the many unanswered questions. How did the lordships get to Costa Rica in the first place? How old are they? Where were they made? Where did their journey begin? My desire to see them had increased tenfold. The days seemed like weeks. 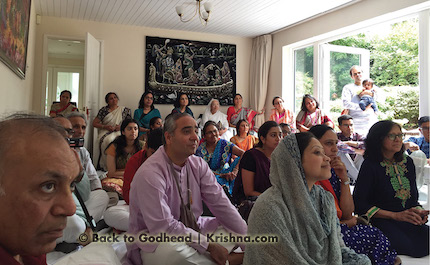 Saturday, 13 January. The day finally arrived. With great anticipation I set off with my wife on the long drive to Crewkerne in Somerset. After about two hours, we reached the sleepy little town.

As we approached the antique shop, I felt anxious, fearing that maybe Their Lordships were already sold.

When we entered the shop, a woman approached us and asked, “Are you the gentleman who rang about the tribal masks?”

I acknowledged, and she gestured to follow her. She led us to a section in the shop with many tribal artifacts from Africa and Central and South America. There, among the shields, swords, knives, masks, and other items, were the three lovely deities. I couldn’t believe it. They looked simply effulgent and stood out amongst everything there. They looked so beautiful.

“They are very tired looking due to the age,” the woman said, “and some damage on one of them, so if you don’t want them, it’s okay.”

As she took the deities and walked away towards the till, I paused for a minute and looked around at the big shop, wondering why the cameraman filming the television program decided to focus on the deities for that split second. There were so many other antique items, spread over two floors, dwarfing the deities, but the cameraman for some reason chose to zoom in on them.

As I paid, I explained the spiritual significance of the deities and how they were not tribal masks or any kind of tribal artifact. She was pleasantly surprised. Furthermore, she was astonished when we decided to pay more than what we’d agreed on. Just before we left, we gave her some prasadam and Prabhupada books.

Once we had left the shop, I couldn’t comprehend what had just happened. As we drove back with the deities, I kept thinking how the Lord works in inconceivable ways. I still had many unanswered questions.

The following day I managed to speak to Steve (the first antiques dealer) and explained the significance of the deities. He was very surprised, and he was pleased that I had found something that meant so much to me.

The Lord Inspires His Servants

After bringing the deities home, our first instinct was to serve them something to eat. Who knows when they had had their last meal. Fearful because of not knowing how best to serve them, I prayed to Lord Jagannatha to help me find devotees who could help.

After a couple of enquiries, devotees were soon appearing from nowhere, offering help with outfits, painting the deities, and other services. It felt as though the Lord Himself had planned all this and had chosen certain devotees to come forward at this very moment to serve Him. Radha Rupa Devi Dasi, for example, spent many weeks carefully painting and transforming the deities. Amrita Devi Dasi, in the U.K. on a visit from Mauritius, designed and made outfits. 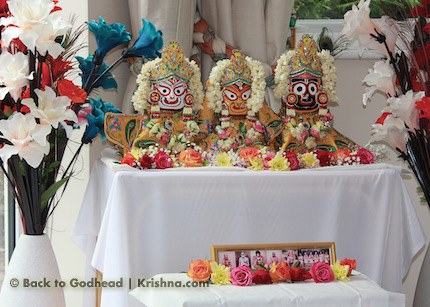 His Holiness Bhakti Rasamrita Swami arrived to officially install the deities and perform the first arati. On that day, I was hoping devotees would bring many offerings so we could at least try to offer fifty-six items, as is done in Jagannath Puri in India. I realized yet again that Lord Jagannatha had different plans. We ended up with 108 offerings. 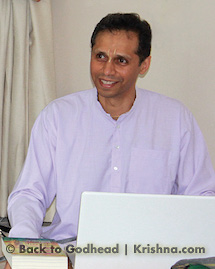 Later on, following these events, I sat down and once again picked up Chasing Rhinos with the Swami. I began to read from the point I had stopped when these wonderful events started to unfold. On the very next page, I read how Malati Devi Dasi had found ISKCON’s first Jagannatha deities in San Francisco in 1967.

I still wonder how old these deities are and where and how their journey began. Equally amazing is how He engaged so many devotees to come and serve Him.