This exchange between His Divine Grace A. C. Bhaktivedanta Swami Prabhupada and some of his disciples took place in Geneva, Switzerland, on June 2, 1974. 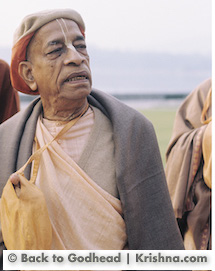 Andha yathandhair upaniyamanah: blind leaders, leading the blind populace into the ditch. The ordinary people are innocent. For instance, the India-Pakistan war happened due to these politicians. The Hindus, the Muslims – they are innocent. They don’t fight. These politicians engage them to fight artificially for their political ambition. The wars declared nowadays are on account of these rascal politicians. The people do not want it.

Disciple: Srila Prabhupada, it seems the politicians want to create scarcity artificially in some areas. But isn’t it true that crops can be grown anywhere in the world?

Srila Prabhupada: Yes. If crops did not grow anywhere in the world, then what would be the value of nature’s arrangement?

Disciple: Well, for example, there are some parts of India that are too dry to cultivate the ground.

Srila Prabhupada: “Dry” means there is no rain. If nature likes, there can be profuse rain. That is nature’s arrangement. That is stated in the Bhagavad-gita. Parjanyad anna-sambhavah. Parjanyat: you must have sufficient rain.

Disciple: Srila Prabhupada, now in many parts of the world the desert area is increasing.

Disciple: So then, isn’t it true that under present conditions, crops may not grow in every part of the world – and that it’s necessary to transport food? At least for the time being, we don’t have the possibility of growing food anywhere and everywhere. So some transportation of food is required.

Disciple: Well, in some areas there still is hope of producing.

Srila Prabhupada: If somewhere crops are produced, then in another place they can also be produced. You must perform yajna – sankirtana-yajna, the chanting of the Lord’s holy names. Then you will get enough food. Yajnad bhavati parjanyah, parjanyad anna-sambhavah, annad bhavanti bhutani.

So in Switzerland are there many slaughterhouses?

Disciple: Some time ago, Srila Prabhupada, I read in the newspaper that they had so much milk and so much butter that the government proposal was to kill the cows.

Srila Prabhupada: “Kill the animals.” Oh, just see. They will not give the milk and butter to others.

Disciple: The farmers were complaining that their prices weren’t high enough, because there was so much milk.

Disciple: In the United States, Srila Prabhupada, they had that same problem. The farmers felt they were not getting a big enough price.

Srila Prabhupada: So if they had sense, they would export to where there is necessity of this milk, butter, grain. Then the world would be happy.

Disciple: That was my question. If there is necessity for exporting, then is there necessity for maintaining ships and planes and trains and electrical dynamos and so forth?

Srila Prabhupada: No. The point is that if in one place you can produce food grains, butter, and milk, then why can you not produce these things in another place? That is my point. The land is everywhere the same.

Now, here in Europe and America, there is enough production because the population is less. America is larger than India and has much less population. Therefore you find excess. You see? Also, India is not fully producing, not utilizing all the land.

Disciple: Srila Prabhupada, if the people here in the West are so sinful, how is it that they have so much facility and comfort? Apparently, all of that will go away soon. Very soon.

Srila Prabhupada: Yes. Yes. As the people increase their sinful activities, this facility and comfort will be taken away.

Therefore we propose that “Everything belongs to Krishna, and we are all sons of Krishna. Just cooperate in Krishna consciousness. Then the whole world will be happy.”

This is our proposal. “Why do you think, ‘It is American,’ ‘It is Swiss,’ ‘It is Indian’? Everything belongs to Krishna. Let us become obedient to Krishna, and because we are sons of Krishna, let us enjoy the property of Krishna. Immediately there will be happiness.”

I have several times said that all over the world, people can produce so much foodstuff that ten times the present population can be fed. Ten times. In Africa, in Australia, and even in America, there is so much prospect of producing additional food.

But they will not cooperate. They will go on killing the animals. They will throw the grain into the sea and claim, “It is our land – so this grain is our property to dispose of as we like.” Rascal civilization.