“Without God We Would Have No Existence”

This is the conclusion of a conversation between His Divine Grace A. C. Bhaktivedanta Swami Prabhupada and reporters in Melbourne, Australia, on June 29, 1974. 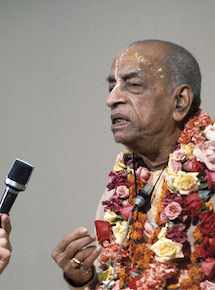 Srila Prabhupada: So we are living beings. But we are not the Supreme Being.

Reporter: And yet God is inside us.

Srila Prabhupada: God is inside, outside – everywhere.

Reporter: Your Divine Grace, who do you think Jesus Christ was?

Srila Prabhupada: Now, let us finish one idea at a time. Jesus Christ said that he is God’s son. That’s all right.

Srila Prabhupada: The drop of water becomes the ocean?

Reporter: No. But it becomes merged in that ocean.

Srila Prabhupada: That’s all right. Merging is different. But the ocean remains the ocean.

Srila Prabhupada: And you remain the drop. That’s all. Now, take your material body – earth, water, fire, and so on. When you pass away and this body becomes decomposed, its present form will not remain. Does this mean that your body will become the totality of universal elements?

Reporter: No. But surely the body is different from the soul.

Reporter: When they say the drop mixes with the ocean, it’s like the human, finite form merging with the infinite, and then it acquires the powers of the infinite.

Srila Prabhupada: No. “Mixes” or “merges” means something less. This example is given. Let us say a green bird enters into a tree which is also green. So although to my eyes it appears that the bird has mixed or merged into the tree, actually that is not the fact. Or take an airplane. You look into the sky and see an airplane flying along. Then, after some time, you look and see there is no airplane. You see only the sky. To your eyes, it may appear that the airplane has mixed or merged into the sky. But of course, the airplane has not merged. It cannot merge. The airplane is keeping its identity, just as the bird is keeping his identity.

Reporter: Your Divine Grace, is the human soul limited or unlimited?

Srila Prabhupada: Yes. Because you are in fact limited; therefore you are under the control of material nature. That is being explained in these examples of the bird and the airplane. For instance, the bird is limited. Now, if he keeps his limited existence, that is nice. But if, unnecessarily, he wants to become unlimited, that is artificial. How can it be?

Reporter: I seem to remember reading a particular chapter of the Bhagavad-gita that said . . . I can’t quite remember what chapter it was, but it said that – Krishna was talking to Arjuna – and it said that Krishna said to Arjuna, “When you realize Me,” or when you realize God, Krishna, “you will see the whole creation inside Me.”

Reporter: “You will see the whole creation within Me and within yourself.” Is that a true translation?

Srila Prabhupada: One of my disciples can give you the accurate translation.

Srila Prabhupada: So what is that? Does it mean that all beings are Krishna?

Reporter: The translation that I read also said, “You will see Me within yourself.”

Reporter: So we are in God, and God is in us?

Srila Prabhupada: Yes. Without God we would have no existence.

Disciple: Srila Prabhupada, here is the exact translation of that verse in Bhagavad-gita As It Is. “A true yogi observes Me in all beings and also sees every being in Me. Indeed, the self-realized man sees Me everywhere.”

Srila Prabhupada: So without God we would have no existence. That’s all. That we live in Him does not mean we become Him. Constitutionally, we are His part-and-parcel servants, and we have to serve Him.

Reporter: Your Divine Grace, do you think that every human being will become liberated?

Srila Prabhupada: Oh, yes. When people learn this great science of God realization and self-realization that Krishna has given in Bhagavad-gita, then He promises they will be liberated. Janma karma cha me divyam evam yo vetti tattvatah/ tyaktva deham punar janma naiti mam eti so ’rjuna: “One who knows the transcendental nature of My appearance and activities does not, upon leaving the body, take his birth again in this material world, but attains My eternal abode, O Arjuna.” You see? Krishna guarantees it.

Reporter: Your Divine Grace, thank you very much for your time.