MotelGita: Solace for the Traveling Soul

MotelGita: Solace for the Traveling Soul

Travelers in North America and elsewhere are discovering Bhagavad-gita As It Is in their hotel-room nightstands.

An ambitious project aims to distribute one million Gitas to hotels across North America. 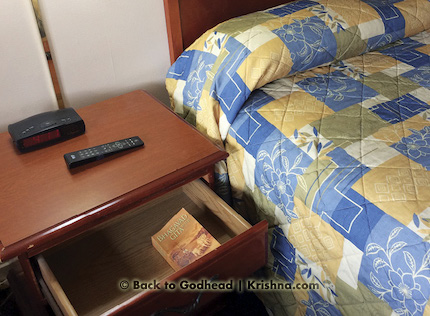 It was business as usual at a Ramada Inn in New Jersey. The receptionist was busy at the front desk when suddenly a customer stormed through the door. While the receptionist assigned him a room, the man, who appeared angry, noticed a random book on the counter. He grabbed the book along with his room key.

The next morning, he emerged from his room peacefully, and gladly thanked the hotel’s manager for the book.

“I checked into your hotel last night to commit suicide,” he said. “But I found this book, Bhagavad-gita As It Is. I read, and kept reading, and forgot my plan. This book saved my life.”

Around the same time, halfway across the world in New Delhi, a French professional BMX rider, found Bhagavad-gita As It Is in his hotel room and spent hours reading it. The book inspired a visit to Vrindavan sometime later. While there, he made a YouTube video based on the philosophy of Krishna consciousness. It got seventy thousand hits.

“In the BMX industry,” he says, “everyone now knows I’m into Krishna. I’m so stoked to think that when people think about me they remember Krishna – that makes my life complete.”

How It All Started

How is it that people are finding Srila Prabhupada’s Bhagavad-gita As It Is in their hotel rooms? The seed for this innovative book-distribution strategy was planted eleven years ago by clever devotees in the software capital of the world, Silicon Valley, California, where ISKCON has a temple. Mayapur Bihari Dasa and Dilip Patel approached temple president Vaisheshika Dasa and asked if it would be a good idea to place copies of Bhagavad-gita in motel and hotel guest rooms.

“We’re already distributing Srila Prabhupada’s books outside grocery stores, malls, and other big outlets,” Mayapur Bihari said. “Why not hotels? Just as the Gideons place Bibles in hotel rooms throughout the world, we’re thinking to distribute Bhagavad-gitas to hotels in California.”

Vaisheshika immediately agreed and encouraged them to put all their energy and effort into this service. He oversaw the initiative, and the project has flourished under his expert guidance and inspiration. Together the team came up with a mission statement: “Provide solace to the traveling souls.”

Dilip Patel’s Sea Breeze Motel in Pacifica, California, became the inaugural hotel. A few other hotels in California soon joined the cause. The initial response was overwhelmingly favorable. Guests and hotel owners wholeheartedly welcomed these sacred books. Hotel owners rejoiced at their customer’s reactions and felt purified by performing this simple service. One of the first hotel owners to take part donated four thousand dollars toward the project.

Devotees from the Indian state of Gujarat, where Lord Krishna is worshipped in nearly every home, were beginning to settle and buy property in the United States around the time Srila Prabhupada came to America in 1965. Lord Krishna seems to have prepared the field for dissemination of His message through them. Seventy percent of motels in the United States are owned by Gujaratis. This widespread venue for planting the Gita has the potential to spiritualize the lives of countless people for many years to come.

The large population of Gujaratis in America has led to much of the approval for placing the Gitas in hotel chains as well as financial support for the project. Donors simply love the cause of bringing the Bhagavad-gita to the mainstream.

At a small-scale Diwali event early in the MotelGita project’s history, attendees donated more than a thousand dollars in just an hour. In 2011, during ISKCON’s annual December book-distribution marathon, MotelGita donations accounted for fifty percent of book-related donations at the Silicon Valley Hare Krishna temple. Devotee representatives approached their colleagues at high-tech companies, and the response was incredible. These colleagues applauded MotelGita’s efforts and donated wholeheartedly.

After the Silicon Valley MotelGita team received promising responses, other Hare Krishna communities in the United States followed their lead. Today, MotelGita book placement is performed by devotees in more than twenty cities around the country.

Lokadhyaka Dasa has committed ISKCON Baltimore to sponsoring at least one thousand Bhagavad-gitas every month, and the temple has been successfully doing that for more than two years.

When devotees of the Laguna beach MotelGita team were on a road trip during the Christmas holidays, they encountered Chinese and Japanese motel owners who enthusiastically agreed to place Gitas in their rooms.

Jaya Chaitanya Dasa, a book distributor in the Los Angeles area, tells the following story: “At the Griffith Observatory I met a tourist from Louisiana who excitedly told his wife, ‘There it is! The book!’ He picked up the Gita from my display table and almost kissed the cover. His wife couldn’t understand why he was so excited. He said he had found a copy of the book the previous day in his hotel room. Because he had never seen another book placed next to the Bible, he knew the Gita must be a very important book. He asked the hotel owner if he could keep the book, and the hotel owner gladly agreed.”

He bought a copy of the First Canto of Srimad-Bhagavatam and several other books from Jaya Chaitanya and gave a generous donation.

Book distribution is part of sankirtana-yajña, or spreading the glories of Lord Krishna, as recommended in the Vedic scriptures as the religion for this age. Due to the popularity of the MotelGita project as a significant aspect of sankirtana, the project has expanded globally, with programs in Canada, New Zealand, India, Australia, and the UK.

Beryl Trimble from Maple Ridge, BC, Canada, had to stay at the local Best Western hotel for a few weeks after her home was damaged by fire. She found Bhagavad-gita As It Is in her room, a comfort amid the calamity. She joined the MotelGita team and is now an initiated devotee.

Bhakta Harish from Knoxville, Tennessee, lives where he has little opportunity for association with devotees of Krishna. But his book distribution service keeps him connected with the larger ISKCON family. He visits motels on road trips and has placed over seven thousand Gitas in this way.

In my own experience, the MotelGita team has become my extended family. The spirit of cooperation is unique as we work together to show our love for Srila Prabhupada.

Mayapur Vihari Dasa explains that several organizations in the past had tried to place the Gita in hotels, but it was very challenging.

“If you have to do this on a massive scale,” he says, “you not only need to have a strong desire to share this knowledge but also sound logistics and infrastructure to run it. We are blessed to have the Bhaktivedanta Book Trust (BBT), which prints and delivers books all over North America. We have devotees everywhere who can take part in this project, and above all we have leaders like Vaisheshika Dasa and Svavasa Dasa who have dedicated their lives for distributing Srila Prabhupada’s books and are always available to inspire, enthuse, and lead the team.”

MotelGita (North America) is a large-scale project with sound networking. The infrastructure includes a core team member working from India. Similar to the use of call centers, MotelGita has employed Dinesh Tinani, a devotee from the Sri Sri Radha-Gopinatha temple in Chowpatty, Mumbai, to call motel owners in North America for orders and then do follow-up. On average he receives orders for five thousand Gitas every month. Vedavit Krishna Dasa manages the dispatch of the orders. He has set up a robust shipping system through the US postal system’s Media Mail and saved thousands of dollars in shipping costs for temples in the United States.

A project as massive as MotelGita requires a strong outreach effort as well. One way the MotelGita team reaches out to motel and hotel owners is by attending regional and national conventions. Dilip Patel uses his contacts in the hotel industry to secure vendor booths at the Asian American Hotel Owners Association (AAHOA) and Leuva Patidar Samaj (LPS) conventions. Several devotees on the MotelGita team attend multiple conventions.

“Local conventions are a great place to connect with motel owners,” says Rupasagara Dasa from Austin, Texas. “In this relaxed setting, you get to understand more about the industry. It helps us come up with innovative ideas to help the owners.”

His wife, Mahasundari Madhavi Devi Dasi, relates, “I met a motel owner from Olathe, Kansas, at the 2017 AAHOA convention whose property was right across from the bar where an Indian software engineer was killed on racial grounds. When I approached him to take Gitas, he very happily agreed. I asked him if he was afraid of any backlash. He smiled and said that it was in tough times like this that the message of peace in the Gita is most relevant.”

She loves the idea of spreading the teachings of Srila Prabhupada to every town and village by reaching one motel at a time.

This couple enjoys driving by a particular intersection south of Austin where there are eight motels – most of them owned by non-Indians and non-Hindus – and they all have Gitas.

MotelGita acknowledges the crucial role motel owners play in this project. The Laguna Beach temple organized a special appreciation night for owners to thank them. They were given full sets of Srimad-Bhagavatam. The MotelGita team also does Bhagavatam installations at homes and motels and conducts home programs. Occasionally motel owners buy Bhagavatam sets, and some donate sets to needy devotees.

Vaisheshika Dasa writes in his book Our Family Business, “A soul trapped in a material body requires outside help to become free. Only by hearing from a transcendental source can a conditioned soul awaken his dormant spiritual awareness.” By sharing Srila Prabhupada’s books, the members of the MotelGita team are hoping to help the trapped soul become free. This is what they strive for. It’s their victory and success. As Sañjaya says at the end of the Bhagavad-gita (18.78), “Wherever there is Krishna, the master of all mystics, and wherever there is Arjuna, the supreme archer, there will also certainly be opulence, victory, extraordinary power, and morality. That is my opinion.”

Srila Prabhupada said that his books are like time bombs, just waiting to explode and destroy peoples’ illusions and anxieties, and MotelGita is placing Bhagavad-gita As It Is in an ever-increasing number of motel rooms. “If one properly follows the instructions of Bhagavad-gita,” Srila Prabhupada wrote, “one can be freed from all miseries and anxieties in this life, and one’s next life will be spiritual.” As His Holiness Giriraja Swami, a MotelGita supporter, says, “What greater gift can we give to the weary traveler?”