Not Everyone Will Come

This conversation between Srila Prabhupada and the poet Allen Ginsberg took place on May 12, 1969, in Columbus, Ohio. 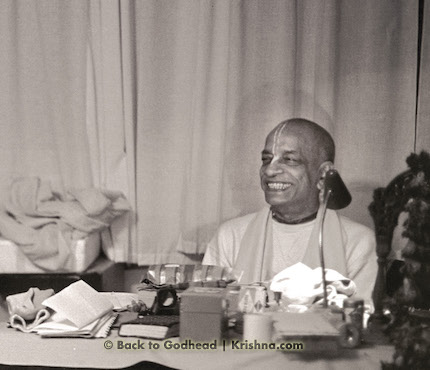 Allen Ginsberg: It’s difficult for me to conceive everybody in America . . .

Srila Prabhupada: Nothing is accepted by everybody.

Allen Ginsberg: Or even a vast, vast number of people living a Hindu-language-based, Hindu-food-based, monastic life in America. And many of us have been thinking what form of religious practice, what form of simple meditation exercises could be set forth in America that could be adopted by a great, great, great many people on a large scale. We haven’t solved the problem. One thing I have noted is that the Krishna temples have spread and are firmly rooted and solidly based. There are a number of them now. So that really is a very solid root. So I think that will continue.

Allen Ginsberg: But I’m wondering what the future is there. What’s the future of a religious observance so technical as this? So complicated as this? It requires so much sophistication in terms of diet, daily ritual – the whole thing that you’ve been teaching. How far can that spread? By its very complexity . . .

Srila Prabhupada: Yes, it is complex. The whole idea is to keep the devotees always engaged in Krishna consciousness. That is the program.

Allen Ginsberg: Well, the orthodox Jews have a very heavy, complicated, moment by moment ritual daily existence for the same purpose. It was to keep them conscious of their religious nature. And that has maintained a small group of Jews over the centuries as an integral unit. But this has tended to disappear in the later generations now simply because modern life does not allow that much Krishna consciousness or Jewish consciousness or religious consciousness and attention, act by act throughout the day. So my question is how far can total Krishna devotion, act by act all day, spread? How many people can that encompass in a place like America? Or are you intending only to get a few followers, like several hundred or a thousand who will be solid and permanent?

Srila Prabhupada: Yes. Yes. That is my program. Because Krishna consciousness is not possible for everyone. In the Bhagavad-gita we learn, bahunam janmanam ante: after many, many births one can come to this. So it is not possible that a mass of people, a large quantity of people, will be able to grasp it. You see? Another place in the Bhagavad-gita it is said, manushyanam sahasreshu kashchid yatati siddhaye: Among many thousands of men, one may be interested in how to liberate himself. And out of many such liberated persons, one may understand what is Krishna. So understanding Krishna is not a very easy thing. But Lord Chaitanya is so munificent that He has given us a very easy process, the chanting of Hare Krishna. Otherwise Krishna consciousness is not easy. Because Krishna is the last word of the Absolute Truth.

Generally, people are just like animals. Out of many such persons, one becomes interested in the scriptures. And out of many such persons, if they’re attracted to the scriptures they’re attracted to the ritualistic ceremonies for improving their economic condition. You see? Not just Christians – everyone. They take up religion with the motive to improve their economic condition. Dharma, artha. Dharma means religion. Artha means money. And then why artha? To satisfy the senses. That is kama. Dharma, artha, kama. And when one becomes frustrated in sense gratification, then one desires liberation, moksha – to merge. These four things are going on. Dharma, artha, kama, moksha.

Allen Ginsberg: Your plan here in America, then, is to set up centers so that those who are concerned can pursue their studies and practice?

Srila Prabhupada: Personally, I have no ambition.

Srila Prabhupada: But the mission of human life is to come to that point. So at least there must be some center or institution that may give people this idea. It is not that everyone will come.