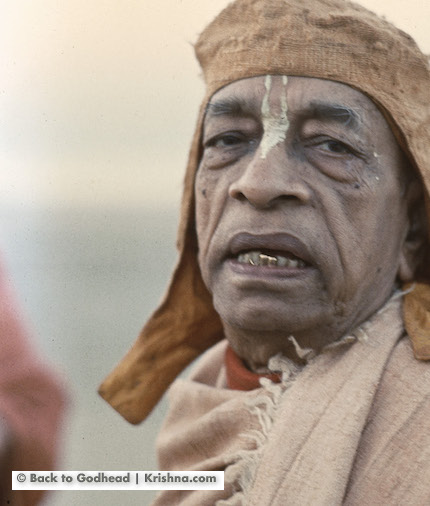 Srila Prabhupada: So those who are devoted to the Lord believe they’ll become happy by seeing others becoming happy.

[To Disciple:] Read the next verse.

Disciple [reading from Bhagavad-gita 16.11–12]: “The demoniac believe that to gratify the senses is the prime necessity of human civilization. Thus until the end of life their anxiety is immeasurable. Bound by a network of hundreds of thousands of desires and absorbed in lust and anger, they secure money by illegal means for sense gratification.”

Disciple: “The demoniac accept that the enjoyment of the senses is the ultimate goal of life, and this concept they maintain until death. They do not believe in life after death, and they do not believe that one takes on different types of bodies according to one’s karma, or activities in this world. Their plans for life are never finished, and they go on preparing plan after plan, all of which are never finished. We have personal experience of a person of such demoniac mentality who, even at the point of death, was requesting the physician to prolong his life for four years more because his plans were not yet complete. Such foolish people do not know that a physician cannot prolong life even for a moment. When the notice is there, there is no consideration of the man’s desire. The laws of nature do not allow a second beyond what one is destined to enjoy.

“The demoniac person, who has no faith in God or the Supersoul within himself, performs all kinds of sinful activities simply for sense gratification. He does not know that there is a witness sitting within his heart. The Supersoul is observing the activities of the individual soul. As it is stated in the Upanishads, there are two birds sitting in one tree; one is acting and enjoying or suffering the fruits of the branches, and the other is witnessing. But one who is demoniac has no knowledge of Vedic scripture, nor has he any faith; therefore he feels free to do anything for sense enjoyment, regardless of the consequences.”

Disciple: Srila Prabhupada, one of America’s richest men. Howard Hughes, just recently died. And reportedly he had been keeping himself in a very disheveled and pathetic condition, with long hair and beard and long nails. There were sores all over his body. So despite all his billions of dollars, he died quite miserably. Just before he left his body, he lamented, “I think I’ve made a mistake.”

Srila Prabhupada: What had he done in his life?

Disciple: In his younger days he designed and raced airplanes. And he flew around the world to help establish commercial air routes. Later he gained control over Trans World Airlines.

In addition, he ran huge machine-tool and aircraft companies and treated other companies – other people, really – quite ruthlessly. After World War II, Congress held an investigation in which they proved he had bribed government officials to give weapons contracts to him. Now it has also come out that in 1968 he requested the newly elected Nixon administration to keep the Vietnam war going. His weapons were of course killing thousands of people, but he just couldn’t stop. He was making too much money.

Besides all that, he produced and directed movies. In the 1930s and 1940s he helped introduce “sexploitation” films, with actresses wearing very revealing clothing. And he had many affairs, too, with all sorts of movie starlets. At the end of his life he didn’t mix with women so much, though. He became depressed, utterly despondent. He lived like a hermit and was extremely afraid of germs.

Disciple: He became like a hermit. He withdrew into himself. No one knew very much about him. He was very mysterious. And toward the end, he didn’t at all have what we would call a life of sense gratification. He maintained a staff of doctors and clinicians to protect him from death. He spent his last days haunted by fear.

Bhagavad-gita’s description of the demoniac is perfect. Most of Hughes’s fortune they figure he amassed by illegal methods, such as paying off government officials to give big contracts to, for instance, his aircraft company.

He had holdings in Las Vegas and was involved in all sorts of mysterious maneuvers. It appears he got much – if not most – of his money illegally.

So gradually he became more and more fearful of the outside world, until in his old age he became terrified of germs. He was deathly afraid he would catch some disease that would do him in. As a result he arranged to live within hermetically sealed rooms, with artificially filtered air and light so that no germs could enter, and he would wear specially de-germed clothing.

Srila Prabhupada: Apparently he did not realize that he was breeding germs within his own body.

Disciple: Yes, Srila Prabhupada. Even with all his billions of dollars, he could not escape death. He used unlimited quantities of money to get rid of germs, but it was all a failure.

Srila Prabhupada: Yes. If he had actually gotten rid of the germs, then how was it that he died?

Disciple: He supposedly said something to the effect that “I have achieved so many things in this life. But I really don’t know what this life was all about. I think I’ve made a mistake.”

Srila Prabhupada: Yes, it was a mistake.