Our Understanding Is Not Arbitrary 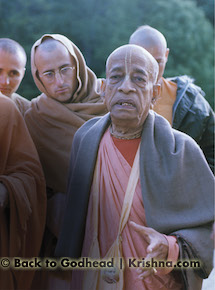 Disciple [reading Bhagavad-gita As It Is, 16.4]: “Pride, arrogance, conceit, anger, harshness, and ignorance – these qualities belong to those of demoniac nature, O son of Pritha.”

Purport, by Srila Prabhupada: “In this verse, the royal road to hell is described. The demoniac want to make a show of religion and advancement in spiritual science, although they do not follow the principles. They are always arrogant or proud in possessing some type of education or so much wealth. They desire to be worshiped by others and demand respectability, although they do not command respect.

“Over trifles they become very angry and speak harshly, not gently. They do not know what should be done and what should not be done. They do everything whimsically, according to their own desire, and they do not recognize any authority. These demoniac qualities are taken on by them from the beginning of their bodies in the wombs of their mothers, and as they grow they manifest all these inauspicious qualities.”

Srila Prabhupada: So here is your answer as to how modern civilization is defective. Everyone thinks “liberation” means he can do whatever he likes. And that is the definition of a demoniac person. Now you can discuss this point.

Disciple: Yes, “heroism.” In this purport, Srila Prabhupada, you perfectly describe our student life. As students, we were doing everything whimsically. Or we simply accepted bad things.

Srila Prabhupada: For that reason Prahlada Maharaja recommends, kaumara acaret prajno dharman bhagavatan iha: students should be trained up in Krishna consciousness. That is what Prahlada Maharaja recommends. Currently, from the very beginning of student life, one is trained up as a demon. So many things have to be reformed by pushing on Krishna consciousness. So we have to do all this.

Disciple [reading Bhagavad-gita 16.5]: “The transcendental qualities are conducive to liberation, whereas the demoniac qualities make for bondage. Do not worry, O son of Pandu, for you are born with the divine qualities.”

Purport, by Srila Prabhupada: “Lord Krishna encouraged Arjuna by telling him that he was not born with demoniac qualities. His involvement in the fight was not demoniac, because he was considering the pros and cons. He was considering whether respectable persons such as Bhishma and Drona should be killed or not, so he was not acting under the influence of anger, false prestige, or harshness. Therefore he was not of the quality of the demons. For a kshatriya. a military man, shooting arrows at the enemy is considered transcendental, and refraining from such a duty is demoniac. Therefore there was no cause for Arjuna to lament. Anyone who performs the regulative principles of the different orders of life is transcendentally situated.”

Disciple: People say, “Your understanding is arbitrary. You allow the possibility of a ‘godly war’ and say that for a bona fide military man, fighting and killing are exalted, but we think war is degraded. We think everyone should be peaceful. That’s our idea of a good man.”

Srila Prabhupada: Our understanding of the divine qualities and the demoniac qualities is not arbitrary. It is given by Krishna, the Supreme Personality of Godhead. So it is not arbitrary. This knowledge is given by the Supreme’s order. How can people say it is arbitrary? Then what is the use of referring to Bhagavad-gita? Yes, things must not be arbitrary or whimsical. Therefore we make reference to Bhagavad-gita – the lawbook. When a judge gives his verdict he does not give it arbitrarily. There are lawbooks. So there is no question of “arbitrary.” The reference is there. How can you say it is arbitrary? But if you don’t care about the scriptural verdict then you’ll never be successful. In this same chapter you’ll find the verse beginning yah shastra-vidhim utsrijya.

Disciple: Yah shastra-vidhim utsrijya vartate kama-karatah/ na sa siddhim avapnoti na sukham na param gatim: “But he who discards scriptural injunctions and acts according to his own whims attains neither perfection, nor happiness, nor the supreme destination.”

Srila Prabhupada: So we are not giving anything arbitrary.

Srila Prabhupada: Yes. So the result is there – even in this life we can see it. And what to speak of beyond this life.

Disciple: But people may counter that even in a godly war it’s hard to feel happy.

Srila Prabhupada: In a godly war, such as the Battle of Kurukshetra, bona fide military men feel happy. Take Arjuna, Drona, Bhishma – they felt happy. Otherwise, they could not have fought. They were not like these modern soldiers, who, when they are attacked, go away. Real kshatriyas, godly military men, are not like that. They are determined that “I’ll either lay down my life or gain victory.” That is their attitude. Do you think they are afraid of fighting? They are not afraid of fighting. Yuddhe capy apalayanam – “not fleeing in battle.” That is a real kshatriya, a real military man. That is real training.