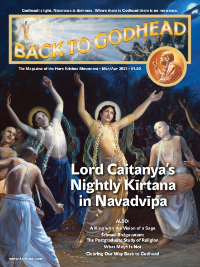 WELCOME  This issue corresponds with the annual festival of Sri Gaura Purnima, celebrating the anniversary of the appearance of Sri Chaitanya Mahaprabhu in Bengal 435 years ago. Gaura, meaning “golden,” is a name for Lord Chaitanya that refers to the hue of His glowing complexion. Purnima is the full-moon night.

Srimad-Bhagavatam, composed more than fifty centuries ago, predicted that in this age Lord Krishna would descend, not in His original cowherd-boy form, but disguised as a golden-complexioned devotee of Himself. The Bhagavatam says that He and His associates will engage in chanting the holy names of the Lord (harinama-sankirtana), thus revealing the prescribed spiritual practice for our times. Our cover story in this issue, excerpted from a biography of Lord Chaitanya written shortly after His time here, gives us a glimpse into the beginnings of the sankirtana movement.

Though chanting is at the heart of Lord Chaitanya’s movement, there’s much more to it than that. He taught extensively about philosophy and theology, drawing primarily on Srimad-Bhagavatam to establish eternal spiritual truths. In “Srimad-Bhagavatam: The Postgraduate Study of Religion,” Satyaraja Dasa describes some of the glories of that incomparable scripture. 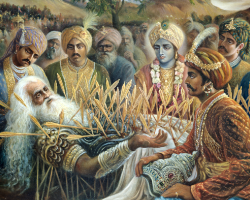 Though emperor of the world and a powerful warrior, Yudhishthira Maharaja displayed the character of a compassionate Vaishnava. By His ...
Read More 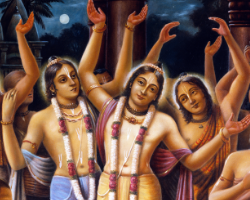 Only the purest souls were fortunate enough to witness Sri Chaitanya Mahaprabhu’s ecstatic chanting and dancing in the home of ...
Read More 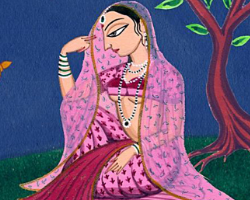 As Sita Devi’s example shows, good judgment must inform our desire to do the right thing. By Chaitanya Charana Dasa ...
Read More 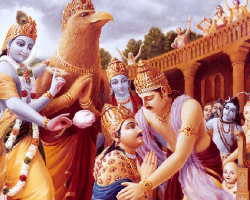 Which Is Greater: Ninety-Nine or a Hundred?

An incident involving King Prithu and Lord Indra shows that the higher of two scores is not always the better ...
Read More 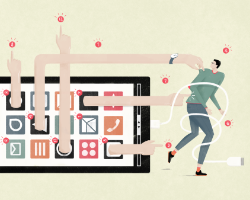 Removing the Vice from Device

How not to become spiritually foolish in an age of smart phones, smart appliances, smart everything. By Karuna Dharini Devi ...
Read More 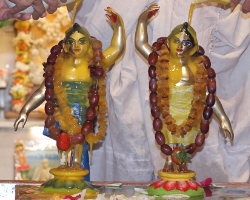 Clearing Our Way Back to Godhead

To identify the subtle challenges to our devotional progress, we need the help of scripture and other devotees. By Rukmini ...
Read More 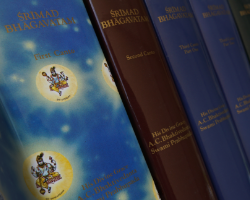 Srimad-Bhagavatam: The Postgraduate Study of Religion

Most people hope for heavenly rewards from their religion. The Bhagavatam begins by rejecting that idea. By Satyaraja Dasa The ...
Read More 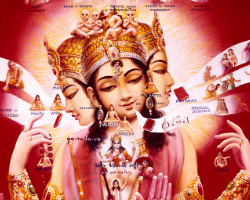 A life of Krishna consciousness provides plenty of freedom to satisfy our inspiration to create. By Vishakha Devi Dasi Our ...
Read More 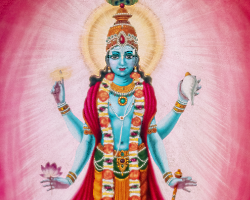 Knower of the Field: A Perspective on Consciousness

The Bhagavad-gita tells us that someone besides us is fully aware of all our unique subjective experiences. By Soumya Gupta ...
Read More
Page load link
Go to Top