Where Is Your Religion?

This conversation between His Divine Grace A. C. Bhaktivedanta Swami Prabhupäda and a journalist took place in Los Angeles on December 30, 1968. 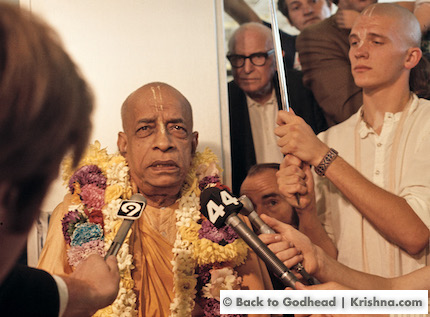 Journalist: Why do you feel that the younger people today are turning more and more toward Eastern-oriented religions?

Srila Prabhupada: Because you have failed to give them satisfaction. Your materialistic way of life will not satisfy them anymore. When one is poverty-stricken he may think, “Money, a woman, a good apartment, a good car can give me satisfaction.” They are after this. But after such enjoyment, they see, “Oh, there is no satisfaction.” Because matter cannot satisfy you.

There is more confusion and dissatisfaction in your country than in India, which is said to be poverty-stricken. You’ll find in India still, although they are poverty-stricken, because they are continuing their old culture they are not disturbed. Why? Because they have got a little tinge of the spiritual platform. So it is necessary now that people should take to spiritual life. That will make them happy.

Journalist: Would you say that the message of western-oriented religions is not relevant, or is it that they have failed to present their message properly?

Srila Prabhupada: In the case of Christianity, the gospels were spoken long, long ago to primitive men living in the desert. Of course, in the Bible, or in the Old Testament, the idea of God is there. That is all nice. For example, there is the Biblical statement “God created this world.” That is a fact. But now, at the present moment, people are advanced scientifically. They want to know how the creation has taken place. But that explanation is not there in the Bible, and neither can the church give the explanation. Therefore people are not satisfied. Simply officially going to the church and offering prayers does not appeal to them.

Besides that, practically they do not follow the religious principles. For example, there is the commandment “Thou shalt not kill.” But killing is very prominent in the Christian world. They are regularly maintaining slaughterhouses, and they have manufactured a theory that animals have no soul. They say the animal has no feelings, so they can kill it – give a dog a bad name and hang it. Why do they say the animals cannot feel? Why are people committing these sinful activities?

The priestly class, they will not say anything. They will not discuss the matter. Everyone is silent. That means they are deliberately disobeying the Ten Commandments. So where are the religious principles? If you don’t obey the commandments of your scripture, how can it be said that you are following your religion nicely? How can you kill that which you cannot create? And it is plainly stated there, “Thou shalt not kill.” What is the answer? Why are they killing?

Journalist: Are you asking me?

Journalist: Well, yes, obviously, “Thou shalt not kill” is an ethic, and it’s timeless and it’s valid, but man is not really interested in . . .

Srila Prabhupada: They are not interested in religion. It is simply a make-show, show bottle. Then how can they be happy? If you do not follow the regulative principles, then where is your religion?

Journalist: I’m not arguing with you. I couldn’t agree with you more. I’m in total agreement. It doesn’t make any sense. “Thou shalt not kill,” “Thou shalt worship no other gods before Me,” “Thou shalt not covet thy neighbor’s wife,” “Thou shalt honor thy father and thy mother.” Those are beautiful ethics, but they are not obeyed.

Srila Prabhupada: “Thou shalt not covet thy neighbor’s wife.” So who is following this?

Journalist: No one, very few.

Srila Prabhupada: You see? So how can you expect that they’ll be religious? And without religion, human society is animal society.

Journalist: How does your ethic differ from the basic Jewish-Christian ethic of the Ten Commandments?

Srila Prabhupada: There is no difference.

Journalist: Then what do you have to offer that is different from the Christian ethos or the Jewish ethos?

Journalist: In other words, “You obey those principles.”

Srila Prabhupada: I don’t say, “You Christians become Hindus.” I simply say, “You obey these commandments.” I’ll make you a better Christian. That is my mission. I don’t say, “God is not there, God is here.” But I simply say, “You obey God.” I don’t say that you have to come to this stage and accept Krishna as God and no other. I say, “Please obey God. Please try to love God.” And I give the way how to love God very easily. I can teach you, provided you agree.