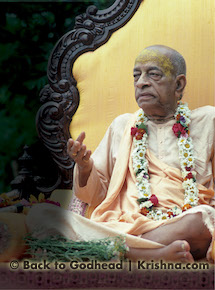 Srila Prabhupada: If you scrutinizingly examine all these various godly qualities that constitute advancement of life, modern man has no idea. That is being explained here in the Sixteenth Chapter of Bhagavad-gita. There is no such education in godly qualities, nor are people interested. Now higher art classes in the colleges, universities – no students will join. They are simply learning technological processes.

[To a disciple, who is reading from Bhagavad-gita As It Is:] Go on reading.

Disciple: ‘Those who are situated in the transcendental nature make progress on the path of liberation. For those who are acting in the modes of passion and ignorance on the other hand, there is no possibility of liberation.”

This is the problem. As you said earlier, to these people “liberation” means “Whatever I like I will do.” But actually, one cannot do that. Still, one is thinking that he’s liberated:

This is the problem. What is modern man’s “liberation”? He does not know what liberation is.

Disciple [continuing to read]: “Either they will have to remain in this material world as human beings, or they will descend among the species of the animals or even lower life forms.”

Srila Prabhupada: “Ah,” people will say, “ – all bogus. This life is all. After this life, everything is finished. I am free.” This is the problem. This is their position.

Disciple: When we speak at schools and colleges, Srila Prabhupada, we find that people cannot defeat what you are saying, They have to admit, “Yes, our society does have many shortcomings. We don’t seem to know how to organize things properly, so that all our citizens can become happy.”

And people also have to admit, “Yes there probably is life after death, and transmigration of the soul. And our society has this great shortcoming – that it teaches us nothing spiritual, nothing about preparing for the life after death.”

Even when they reach the college level, people have quite a bit of difficulty really understanding the basic idea that “I am not this material body – I’m a spiritual being.”

Srila Prabhupada: They’ll understand. I’m just pointing out the difficulties of your preaching. You’ll have to face all these difficulties. In the materialistic society, people have become like cats and dogs. Therefore the business of preaching is somewhat a hard job. You have to deal with cats and dogs. But still there is hope, because they have got this human form of life.

There is hope. It is not hopeless. Don’t be discouraged. But this is the job. You have to meet with cats and dogs. That is my point. When you go to preach, you must know that “I’ve come to preach among the cats and dogs, and I have to deal with them carefully. Otherwise, they will bark.”

That was why, upon arriving in your country, I wrote a poem with an apparent air of disappointment. The idea was, “What will these people be able to understand about this sublime spiritual philosophy?”

“The word abhijatasya in reference to one born of transcendental qualities or godly tendencies is very significant. To beget a child in a godly atmosphere is known in the Vedic scriptures as garbhadhana-samskara. If the parents want a child in the godly qualities, they should follow the ten principles recommended for the social life of the human being. In Bhagavad-gita we have studied also before that sex life for begetting a good child is Krishna Himself. Sex life is not condemned, provided the process is used in Krishna consciousness. Those who are in Krishna consciousness at least should not beget children like cats and dogs but should beget them so that they may become Krishna conscious after birth. That should be the advantage of children born of a father and mother absorbed in Krishna consciousness.

“The social institution known as varnashrama-dharma – the institution dividing society into four divisions of social life and four occupational divisions or castes – is not meant to divide society according to birth. Such divisions are in terms of educational qualifications. They are to keep the society in a state of peace and prosperity. The qualities mentioned herein are explained as transcendental qualities meant for making a person progress in spiritual understanding so that he can get liberated from the material world.”