Before Lord Brahma plays his role in the cosmic creation, Krishna’s expansions set the stage.

By His Divine Grace A. C. Bhaktivedanta Swami Prabhupada, lecture given in New York City on December 19, 1966

Krishna, the eternal cowherd boy who enjoys in the forests of Vrindavana, is the source of the majestic Vishnus who create the material world.

“Brahma and other lords of the mundane worlds, appearing from the pores of hair of Maha-Vishnu, remain alive as long as the duration of one exhalation of the latter [Maha-Vishnu]. I adore the primeval Lord Govinda, of whose subjective personality Maha-Vishnu is the portion of a portion.” – Sri Chaitanya-charitamrita, Madhya-lila 20.281 (quoting Brahma-samhita 5.48) 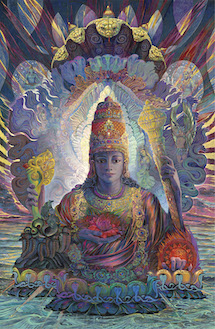 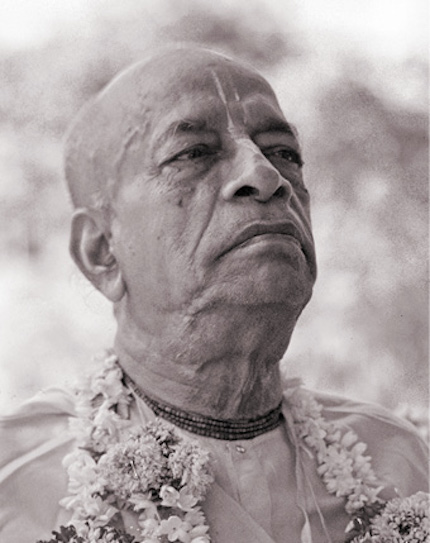 Krishna is Paramatma, the Supersoul, and He knows everything – what one thinks, what one does. So Krishna asked Brahma to come and see Him in Dwarka. Krishna was there as the king.

Brahma came, and Krishna’s doorman asked him, “Who are you, please?”

“Tell Krishna that I am Brahma. I have come to see Him.”

When the doorman informed Krishna, Krishna asked, “Oh, which Brahma?”

The doorman returned to Brahma and asked, “Which Brahma are you?”

“‘Which Brahma?’ I am the Brahma. I am the supreme creature within this universe.”

He was surprised, and he said, “Tell Krishna that I am four-headed Brahma.”

So Krishna called for him.

Brahma came and offered his obeisances, and he asked Krishna, “Krishna, my Lord, may I ask You a question?”

“Your doorman asked me, ‘Which Brahma?’ So does it mean there are other Brahmas also?”

Krishna said, “Yes, there are innumerable Brahmas. You are only four-headed. There are eight-headed, there are sixteen-headed, thirty-two-headed, sixty-four-headed, hundred-twenty-eight-headed, and millions of headed. All right, I am calling them all.”

Krishna called all the Brahmas, and by Krishna’s maya, or power, Brahma could see them. But they could not see four-headed Brahma, and each of them came and offered obeisances to Krishna.

They asked, “My Lord, what can I do for You? You have asked for me?”

“Yes. I have not seen you for a long time, so many days, so I have called you.”

Thousands and millions of Brahmas came, offered obeisances, and went away. And four-headed Brahma remained in the corner.

This is Krishna’s creation.

The Length of Brahma’s Day

Here it is stated, yasyaika-nishvasita-kalam athavalambya: “Millions of Brahmas are living only during the breathing period of Maha-Vishnu.” You have read in the Bhagavad-gita (8.17) about each Brahma’s period:

“By human calculation, a thousand ages taken together is the duration of Brahma’s one day. And such also is the duration of his night.” Brahma’s one day is a thousand times 4,300,000 of our years. That is Brahma’s twelve hours. His full day is twenty-four hours. Now calculate one such month, one such year, one such hundred years. That hundred years of Brahma is only the period of one breath of Maha-Vishnu.

During the breathing period, when the breathing is out all these brahmandas, universes, become created, and when He inhales, they are all closed – account closed. This is going on. And Maha-Vishnu is the fourth of Krishna’s expansions. That is stated. Lord Chaitanya is giving evidence from Brahma-samhita (5.48): yasyaika-nishvasita-kalam athavalambya . . . . “I worship Krishna, Govinda, whose fourth expansion is Maha-Vishnu, during whose breathing period all these Brahmas, the principal heads of each brahmanda, live.”

“Maha-Vishnu is the Supersoul of all the universes. Lying on the Causal Ocean, He is the master of all material worlds.” (Madhya 20.282) Now, this Maha-Vishnu, the purushavatara, or Krishna’s incarnation as the purusha, is the principal Supreme Personality of Godhead of all the many thousands of brahmandas.

“When Maha-Vishnu entered each of the limitless universes, He saw that there was darkness all around and that there was no place to stay. He therefore began to consider the situation.” (Madhya 20.285)

“With the perspiration produced from His own body, the Lord filled half the universe with water. He then lay down on that water, on the bed of Lord Sesha.” (Madhya 20.286) What we are seeing is only half of this universe. The other half is full of water. We cannot see that water, but there is water. The universe is like a ball half filled with water. Where has this water come from? From the Vishnu who entered each universe. From His perspiration He created this water. And He lay down on the water. He is called Seshashayi Vishnu or Garbhodakashayi Vishnu.

“A lotus flower then sprouted from the lotus navel of that Garbhodakashayi Vishnu. That lotus flower became Lord Brahma’s birthplace.” (Madhya 20.287) You have seen that picture.

“In this way, the Supreme Personality of Godhead in His form of Vishnu maintains the entire material world. Since He is always beyond the material qualities, the material nature cannot touch Him.” (Madhya 20.289) Now, this Vishnu has nothing to do. He is not affected by material contamination. That is the power of Vishnu. When we living entities come into this material world, we become contaminated, affected by the influence of this material nature. But Vishnu, although He is looking after the management of the creation of this brahmanda, is not affected.

“The Supreme Lord in His form of Rudra [Lord Shiva] brings about the dissolution of this material creation. In other words, only by His will are there creation, maintenance and dissolution of the whole cosmic manifestation.” (Madhya 20.290) When these material worlds, or universes, are to be annihilated, the same Vishnu in His form of Lord Shiva annihilates them. Vishnu creates, Lord Shiva annihilates, and Brahma is in charge of this universe.

“Brahma, Vishnu and Shiva are His three incarnations of the material qualities. Creation, maintenance and destruction respectively are under the charge of these three personalities.” (Madhya 20.291) Now, this material world is created, it stays for some time, and it is annihilated, just as we have seen in the Bhagavad-gita (8.19):

“Again and again the day comes, and this host of beings is active; and again the night falls, O Partha, and they are helplessly dissolved.” This material nature is like that. You have seen that a lamp is sometimes lit and sometimes extinguished. Similarly, there is creation, there is maintenance, and there is annihilation of this material world.

You may give a carpenter wood and planks and materials and screws and other things, and the carpenter makes a very good cabinet. And you maintain that. Similarly, this brahmanda, the secondary creation, is done by Brahma, and Vishnu is the maintainer. And when it is to be destroyed, it is destroyed by Lord Shiva.

These three gunavataras – Brahma, Vishnu, and Shiva – are incarnations of Krishna’s gunas, or qualities, of goodness, passion, and ignorance. In other words, it is to be understood that the three gunas are coming from Krishna. So therefore, for Krishna there is no such distinction.

Similarly, these qualitative distinctions – matter, spirit, and the different kinds of modes, or qualities – are distinctions for us, not for Krishna. He is absolute. To the Absolute there are no such distinctions. Therefore when Krishna comes to this material world, He is not affected by it. Suppose the minister, the secretary of the president, goes to the criminal department to see the prison house. He is not affected by the prison rules. It is simple to understand. If the prisoner thinks, “Oh, he is also one of the prisoners because he has come here,” this is nonsense. He is not a prisoner. Similarly, when Krishna comes to this material world, if a foolish man thinks that He is also one of us, he is fool number one. Therefore in the Bhagavad-gita (9.11) Lord Krishna says,

“Fools deride Me when I descend in the human form. They do not know My transcendental nature and My supreme dominion over all that be.”

So here it is stated:

“Brahma, Vishnu and Shiva are His three incarnations of the material qualities. Creation, maintenance and destruction respectively are under the charge of these three personalities.” (Madhya 20.291)

“Garbhodakashayi Vishnu, known within the universe as Hiranyagarbha and the antaryami, or Supersoul, is glorified in the Vedic hymns, beginning with the hymn that starts with the word sahasra-shirsha.” (Madhya 20.292) In the Vedas there is a prayer called Sahasra-shirsha. That is a very famous prayer. That prayer is offered to this Vishnu. Which Vishnu? Garbhodakashayi Vishnu, the Vishnu who has entered into every universe.

“Thus he [Vyasadeva] fixed his mind, perfectly engaging it by linking it in devotional service [bhakti-yoga] without any tinge of materialism, and thus he saw the Absolute Personality of Godhead along with His external energy, which was under full control.” When Vyasadeva was attempting to write Srimad-Bhagavatam, by bhakti-yoga he saw two things: the Supreme Personality, purusham purnam, and the material energy, mayam, who was far away from Him – apashrayam.

In the prison house, when the prisoners are there, it is not meant that they should be comfortably situated there. The prison house is meant for always giving them some trouble so that they can come to their consciousness that “We are lawbreakers. Therefore we are punished here.” But the prisoner may be so foolish that he thinks, “All right. I don’t care for this prison. Let me finish this term and again commit nuisance and again come to this prison.” That is going on.

What is the position of the conditioned souls who are not coming to their senses? The grace of some special representative of the Supreme Lord, or of the Supreme Lord Himself, is offered to these conditioned souls. “This is not your place. You are part and parcel of God. Your place is in the kingdom of God. Your place is there. You are struggling very hard within this material nature. Just try to understand your position.”

These things are described in the scriptures, in the Vedas, so that these foolish conditioned souls may come to their senses and try to become Krishna conscious and make their life successful so that they can go back home, back to Godhead.