The history of ISKCON’s Jagannatha Mandir in Mayapur, West Bengal.

The history of ISKCON’s Jagannatha Mandir in Mayapur, West Bengal.

Five hundred years ago, at the time of Lord Chaitanya, there lived a very wonderful devotee named Jagadish Ganguli. His residence was in a small village near Mayapur. Although he was advanced in age, every year he would go on the nine-hundred-kilometer journey to Jagannatha Puri on foot to associate with his master, Sri Chaitanya Mahaprabhu, take darshana of his beloved Jagannatha, Baladeva, and Subhadra Devi, and participate in the all-auspicious Rathayatra festival.

One day, less than a month before his scheduled departure for Puri, Jagadish’s plans were foiled. He was stricken with a terrible disease that left him completely blind. Because he was optimistic by nature, this did not dampen his desire to make the yearly padayatra to Puri. He would no longer be able to see the divine, all-merciful forms of Lord Chaitanya and Lord Jagannatha; that was for sure. But still he could relish the sound of sweet kirtana and discourses given by exalted Vaishnavas.

His friends and associates, however, were not so keen on him traveling. They considered the annual pilgrimage too long and dangerous for a blind man and refused to take him with them. Jagadish was heartbroken. His existence in this world became a cause for his constant lamentation and despondency. Somehow he passed his days, calling out for the all-merciful Jagannatha to be merciful to him. 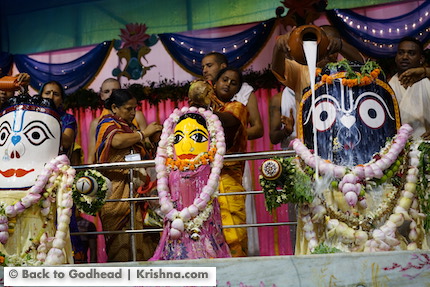 Then, one night, Lord Jagannatha appeared to His devotee in a dream. The Lord told him that on the following day when he went for his daily bath in the Ganges, a log would touch his head and restore his vision. The Lord instructed Jagadish to take that log to a nearby village and request a certain devotee carpenter there to carve a deity of Lord Jagannatha. The Lord also explained that at first the carpenter would refuse to do the work because he was a leper and his hands were very deformed. It was Jagadisha’s task to convince him to do the service. The Lord assured him that when the carpenter had completed the deity his leprosy would be cured.

At the break of dawn Jagadish woke from his dream and marveled at it. Eagerly he readied himself for his daily bath. He paid his obeisances to Mother Ganga and then entered her sacred waters. Lord Jagannatha’s words were quickly proven true. A log touched his head and promptly restored his vision. Enlivened by the Lord’s shower of mercy, he took the log and quickly proceeded towards the nearby village. After many hours, an exhausted Jagadish found the leper carpenter, who flatly refused to carve the deity.

He showed his deformed fingers and asked his expectant customer, “How is it possible for me to carve the divine form of the Lord with these hands?”

Jagadish lived with the devotee leper carpenter while he was carving his Lord. He saw him suffering terribly. Blood and pus oozed from the stumps that were once his fingers, and his face was distorted by pain. He wanted to stop this torturous work. Somehow or other Jagadish managed to convince him to continue and constantly spoke to him the pastimes of his beloved Lord Jagannatha to distract his mind from the pain. Finally the deity was completed, and to his amazement the devotee leper was cured of his leprosy.

In great pomp and celebration, Lord Jagannatha was carried to the site of the present temple, and His worship was established there.

A few nights later Jagadish had another dream. This time Lord Jagannatha instructed him to take some nearby neem wood and request the same carpenter to make the deities of Subhadra Devi and Lord Baladeva. The devotee carpenter was delighted to offer his service, and very soon Their Lordships were installed with great love and attention by their trusted devotee.

But then one day Jagadish left this mortal world. His beloved deities were neglected. Indeed, Lord Jagannatha, Subhadra Devi, and Lord Balarama were completely forgotten, and over time their temple deteriorated and collapsed around them.

Some centuries later, a local villager noticed a unique, beautiful blue flower growing on top of a termite hill.

Curious, he ventured closer and was amazed to hear a voice calling, “Please, please give Me some water.”

Quickly he began digging, eager to search out the owner of the voice that instructed and intrigued him. To his utter surprise he unearthed the beautiful transcendental trio: Lord Jagannatha, Subhadra Devi, and Lord Baladeva. He was further astonished to see that although the deities had been residing in the middle of a termite hill, their wood was miraculously unharmed. This event happened about sixty years ago. Once again a temple was constructed and elaborate worship established.

In 1978 the aging pujari of Their Lordships, his health failing, began to worry. He was fearful that history would repeat itself, and could not bear the thought of his beloved Lords being neglected and inconvenienced again. He decided to offer their property to ISKCON. On the Gaura Purnima day of 1978 the most auspicious transaction took place, and a beautiful new temple has since been constructed for Their Lordships’ pleasure. 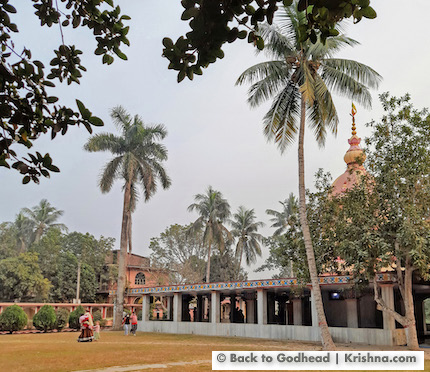 The holy dhama of Sri Kshetra, or Jagannatha Puri, is eternally manifest in this holy place, and all the benefits one can attain by visiting Jagannatha Puri may be achieved visiting the Jagannatha Mandir at Simantadvipa in Sri Navadvipa-mandala. One of these many benefits is the opportunity to partake of Lord Jagannatha’s famous maha-prasadam. Lord Jagannatha’s mercy – in its most delicious form – is waiting for your visit, and surely you will be blessed once you visit Their Lordships.