To understand Krishna we need His mercy, which may come to us in ways that defy our expectations and stereotypes.
By Vishakha Devi Dasi
To know and love God we need His blessings, which we may not always recognize. 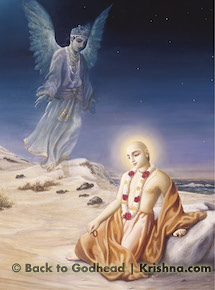 One of the consequences of God’s having inconceivable potency is that He, Krishna, can do what He likes. He is beyond the range of our senses. He is also beyond the compass of our mind and intellect. “God couldn’t do that” is a statement we’re unqualified to make, as we are limited while He is unlimited. This is not to say that Krishna is whimsical, unpredictable, or inconsistent. On the contrary, through the scriptures – books that describe Him and His activities – we can learn of His nature and activities. Yet even such knowledge is insufficient. To actually understand God, we must have – even more than scriptural knowledge – His mercy.

“My Lord, if one is favored by even a slight trace of the mercy of Your lotus feet, he can understand the greatness of Your personality. But those who speculate in order to understand the Supreme Personality of Godhead are unable to know You, even though they continue to study the Vedas for many years.”

The speaker of this verse, Lord Brahma, the secondary creator of the universe, said similarly in his Brahma-samhita (5.33), vedeshu durlabham adurlabham atma-bhaktau: Although Krishna says that by all the Vedas He is to be known, it is very difficult to understand Him simply through one’s studies. Why? Because for Him to be known, He must allow it. That is why it’s easy for His devotees to understand Him: pleased by their service, Krishna reveals Himself to them.

By His nature, Krishna is highly reciprocal. He gives Himself to those who give themselves to Him. The Padma Purana confirms:

What does such mercy look like? Generally “mercy” is understood to be compassion, kindness, and forgiveness. But from the above we can understand that in the context of serving Krishna, mercy means that we have been blessed with at least rudimentary knowledge of His greatness and as a result are inspired to serve Him with affection.

Sri Chaitanya, as the omniscient Supreme Personality of Godhead, knew Junior Haridasa’s mind; He knew that although Haridasa was a celibate sannyasi, he saw this young woman with a desire to enjoy her. Determined not to allow hypocrisy to enter His movement, Sri Chaitanya declared that Junior Haridasa should no longer come into His presence.

Chaitanya Mahaprabhu had been a householder. In fact He married twice, and He had many householder followers. But He demanded that His renounced (i.e., sannyasi) followers must actually be renounced. He would not tolerate hypocrisy. Although Junior Haridasa fasted in remorse and although Sri Chaitanya’s other followers appealed to Him to forgive Haridasa, He did not relent. After a year had passed with no change in the Lord’s mood, Junior Haridasa entered deep within the waters of the Triveni at Prayagraj and drowned himself.

Hearing this pastime, one may think Sri Chaitanya was not merciful but harsh, and on the external level, that’s so. More important than externals, however, is the internal or soul level, which in this case is completely different. “Immediately after committing suicide in this way, he [Junior Haridasa] went in his spiritual body to Sri Chaitanya Mahaprabhu and received the mercy of the Lord. However, he still remained invisible. In a spiritual body resembling that of a Gandharva, Junior Haridasa, although invisible, would sing at night for Sri Chaitanya Mahaprabhu to hear. No one but the Lord, however, knew of this.” (Caritamrita-charitamrita, Antya 2.148–149)

Srila Prabhupada explains: “Sri Chaitanya Mahaprabhu is the teacher of the entire world, and therefore He enforced this exemplary punishment to establish that illicit sexual connections are never allowed by Vaishnava philosophy. This was His purpose in chastising Junior Haridasa. Sri Chaitanya Mahaprabhu is in fact the most magnanimous incarnation of the Supreme Personality of Godhead, but He strictly prohibited illicit sex.” (Antya 2.143, Purport) And: “By chastising Junior Haridasa, Sri Chaitanya Mahaprabhu exhibited His mercy toward him, thus showing how elevated was Junior Haridasa’s devotion for Him. Because of this transcendental relationship, the Lord corrected even a slight offense committed by His pure devotee.” (Antya 2.172, Purport)

A devotee’s progress is determined by Krishna’s mercy, and Krishna is prepared to bestow His mercy on all His devotees. The way that mercy manifests may be hard to predict and externally may not always seem merciful. But whatever happens externally, sincere devotees continue to remember and serve Krishna with affection. Aware of Krishna’s supremacy and ever-present mercy, His devotees remain humble and grateful. Krishna reciprocates with His devotees’ service by keeping them spiritually enthused and confident of their ultimate spiritual success. Their spiritual endeavors remain ever fresh and new. And whatever may be happening externally, Krishna’s devotees are filled with appreciation for His kindness, and their hearts are tender with affection for Him. Their knowledge and appreciation of Krishna, as well as their affection for Him, are evidence of His mercy on them.

*Rameshvara Dasa: . . . story of Chota [Junior] Haridasa. I was very surprised to find that his talking with that woman was actually for the service of Lord Chaitanya. It says that he went to an advanced devotee’s house to get some rice.

Prabhupada: No. It is not that. There was some young woman sitting there, and he glanced over her with lusty desire. Not that old woman.

Rameshvara: That was her sister? Or daughter.