Knowledge and Renunciation in Relation to Bhakti

Knowledge and Renunciation in Relation to Bhakti

What does bhakti have to do with these two cornerstones of genuine spiritual life?

Some insights gained by looking closely at two nearly identical verses in Srimad-Bhagavatam.

“By rendering devotional service unto the Personality of Godhead, Sri Krishna, one immediately acquires causeless knowledge and detachment from the world.” (Bhagavatam 1.2.7)

“Engagement in Krishna consciousness and application of devotional service unto Krishna make it possible to advance in knowledge and detachment, as well as in self-realization.” (Bhagavatam 3.32.23)

These two verses from Srimad-Bhagavatam on bhakti (devotional service), jnana (knowledge), and vairagya (detachment) are similar except for the last line. And the first verse beautifully leads into the second one, as Srila Prabhupada reveals through his translations and even more clearly in his purports.

The first verse relates perfectly to the second verse because the second begins where the first ends. Engaging in devotional service gives detachment and causeless knowledge (1.2.7), and knowledge leads to brahma-darshanam, or self-realization (3.32.23). 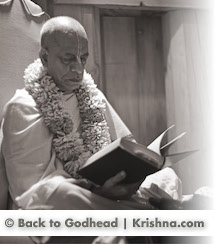 Sri Krishna says something about causeless knowledge in the Bhagavad-gita (10.10): “To show them special mercy, I, dwelling in their hearts, destroy with the shining lamp of knowledge the darkness born of ignorance.”

More importantly, as Srila Prabhupada explains in the purport to the second verse above (3.32.23), both verses begin with vasudeve bhagavati (“unto Krishna, the Personality of Godhead”). So vairagya, jnana, and brahma-darshanam are possible only after rendering devotional service to the person Vasudeva, or Sri Krishna. Brahma can refer to either the Absolute Truth (Brahman) or the individual soul. Thus the phrase brahma-darshanam can mean either self-realization or God realization. Taking brahma to mean the Absolute Truth, Srila Prabhupada explains in his purport that if Brahman were only formless, as the impersonalists claim, there would be no question of darshanam (seeing). Darshanam requires two persons – the seer and the seen.

Brahman can also refer to the brahma-jyoti, or the impersonal aspect of the Absolute Truth. Srila Prabhupada writes in the same purport: “Brahma-darshanam means that as soon as one sees the Supreme Personality of Godhead, he can at once realize what impersonal Brahman is. A devotee does not need to make separate investigations to understand the nature of Brahman.”

The Only Perfect Method

A faithful devotee who has heard from the Vedic scriptures and is equipped with knowledge and renunciation engages in rendering devotional service, as Suta Goswami explains in Srimad-Bhagavatam (1.2.12):

“The seriously inquisitive student or sage, well equipped with knowledge and detachment, realizes that Absolute Truth by rendering devotional service in terms of what he has heard from the Vedanta-shruti.” Srila Prabhupada eloquently captures this point in his purport of this verse: “Devotional service, which is based on the foreground of full knowledge combined with detachment from material association and which is fixed by the aural reception of the Vedanta-shruti, is the only perfect method by which the seriously inquisitive student can realize the Absolute Truth.”

The Narada-bhakti-sutras consider whether knowledge alone can be the means for developing devotional service, or whether one depends on the other:

“Some say that knowledge is the means for developing devotion.” (28)

“Others consider bhakti and knowledge interdependent.” (29)

How is devotional service its own fruit? It cannot be known by any means except itself. Devarshi Narada explains this with examples:

“This is illustrated by the examples of a royal palace, a meal, and so on. A king is not really satisfied just by seeing a palace, nor can someone placate his hunger just by looking at a meal.” (31–32)

Jnana and vairagya are insufficient when the goal is to know the Lord as a person. They may help one realize the Lord’s impersonal aspect, leading to sayujya- mukti, or merging into the effulgence of the Lord’s form, a goal rejected by devotees. But transcendentalists engaged in renunciation and the cultivation of knowledge who are bereft of loving service to Krishna can only advance to that stage.

Only by proper service is it possible to obtain the good wishes of Lord Krishna and know Him as a person. Merely knowing about a king is not enough to obtain his mercy. Similarly, knowing a recipe for a dish is not enough to satisfy us; we have to taste the dish.

Srila Prabhupada elaborates on this point in his purport to Srimad-Bhagavatam 1.2.15:

In the fifteenth chapter of the Bhagavad-gita (15.1) Sri Krishna explains that the leaves of the metaphorical tree of the material creation are the Vedic hymns and one who knows the tree knows the Vedas (chandamsi yasya parnani yas tam veda sa veda-vit). Then in verses three and four He exhorts the sincere seeker to cut down this very tree with the sword of vairagya in order to achieve the ultimate destination of surrender to the Supreme Personality of Godhead (Sri Krishna Himself).

Thus even for one who has achieved the platform of spiritual knowledge (jnana) and renunciation from material attachments (vairagya), these are merely tools to help one reach the goal: bhakti.