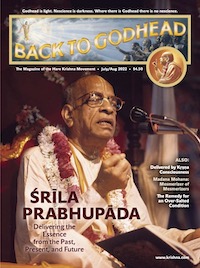 WELCOME  Srila Prabhupada was tasked with the mission from his guru to spread Krishna consciousness to the English-speaking world, and despite all odds he succeeded magnificently. He said that he owed his success to the blessings of his guru, and the Vedic scriptures say that only someone specifically empowered by Lord Krishna can spread devotion to Him far and wide.

In Srila Prabhupada: Delivering the Essence from the Past, Present, and Future, Chaitanya Charana Dasa analyses Prabhupada’s way of presentation, addressing the question of whether he should be considered a traditionalist, an existentialist, or a utopian. He concludes that Prabhupada exemplified the best these three have to offer.

A major aspect of Krishna consciousness that Prabhupada introduced in the West was the worship of the deity in the temple. In Madana Mohana: Mesmerizer of Mesmerizers, Satyaraja Dasa writes about one of the first deities worshiped by the devotees sent by Sri Chaitanya Mahaprabhu to revive Vrindavan, the sacred site of Lord Krishna’s childhood.

Vrindavan in India is spiritually identical to eternal Goloka Vrindavana of the spiritual world. Most residents of Vrindavan today are loving devotees of Krishna and Srimati Radharani, His eternal consort. In an excerpt from her book Bhakti Shakti: Goddess of Divine Love, Pranada Devi Dasi provides insight into the identities and relationship of the divine couple. 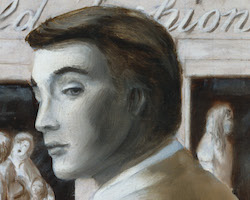 As Krishna tells us in the Gita, lust leads to anger – and things get worse from there. By Vraja ...
Read More 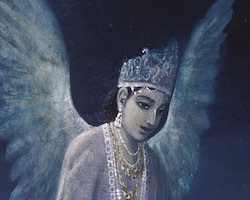 To understand Krishna we need His mercy, which may come to us in ways that defy our expectations and stereotypes ...
Read More 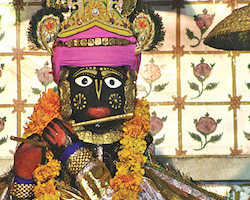 The beloved Krishna deity of Srila Sanatana Goswami appeared in Vrindavan to attract hearts to Him and away from the ...
Read More 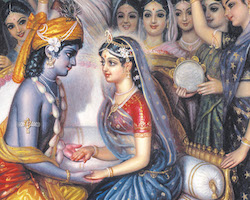 Perfect love and the perfect object of love. By Pranada Devi Dasi Narada prayed: “O you who are the life ...
Read More 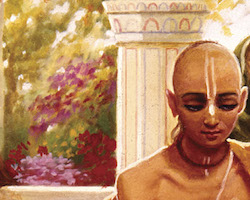 The Remedy for an Over-Salted Condition

Two taste-destroyers: too much salt in a food preparation, and too much attachment to material things. By Karuna Dharini Devi ...
Read More 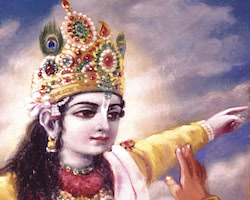 In His Divine Opinion

When Krishna expresses His opinion, we would do well to pay attention. By Jitendra Savenur Unlike us, when Lord Krishna ...
Read More 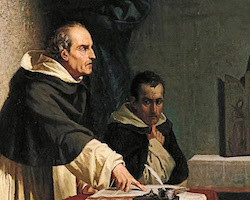 Both religion and science can be objects of faith. By Harivamsha Dasa The volatile history of human faith, and understanding ...
Read More 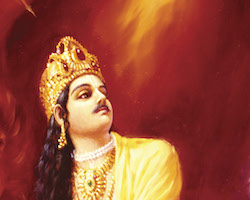 Does One Person’s Mistake Make Many Culprits?

Some episodes from the Srimad-Bhagavatam illustrate the danger of overreacting. By Gauranga Darshana Dasa Our guilty actions can have negative ...
Read More 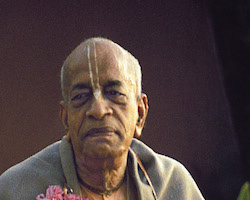 Srila Prabhupada: Delivering the Essence from the Past, Present, and Future

Religious teachers are often presumed to be traditionalists, but Srila Prabhupada transcended that designation. By Chaitanya Charana Dasa As a ...
Read More 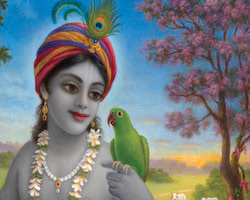 Srila Prabhupada explains that there’s no hope for liberation from material bondage except by chanting Hare Krishna. By His Divine ...
Read More
Page load link
Go to Top