The First Element of Creation

The following conversation between Srila Prabhupada and the poet Allen Ginsberg took place in Columbus, Ohio, on May 11, 1969. 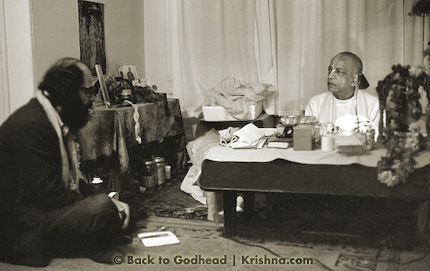 Srila Prabhupada: Nobody is free from service because we are constitutionally servants. Either we become the servant of the Great or of maya. Just like in any condition of our lives, we have to abide by the state laws. If you don’t abide, then you come to the prison house. You will be forced. Similarly, maya and Krishna. If we don’t abide by Krishna, then we come to maya. We cannot be free. That is not our position. Freedom results in frustration.

Allen Ginsberg: Do you remember a man named Richard Alpert? He used to work with Timothy Leary in Harvard many years ago. And then he went to India and found a teacher and is now a disciple of Hanumanji, or a devotee of Hanuman. We were talking about maya and the present condition of America. So he said that his teacher in India told him that LSD was a Christ of the Kali-yuga for Westerners.

Allen Ginsberg: Of the Kali-yuga for Westerners. As the Kali-yuga got more intense, as attachment got thicker and thicker, salvation would also have to get easier and easier.

Srila Prabhupada: That is a very nice statement that in the Kali-yuga salvation becomes much easier. That is the version of Srimad-Bhagavatam also, but that process is this kirtana, not LSD.

Allen Ginsberg: Well, the reasoning was that for those who would only accept salvation in a purely material form, in a chemical form finally, Krishna had the humor to emerge as a pill.

Srila Prabhupada: No, the thing is that with any material form, where is there salvation? It is illusion.

Allen Ginsberg: Well, the subjective effect is to cut attachment during . . .

Srila Prabhupada: No. If you have got attachment for something material, then where is the cut-off of attachment? LSD is a material chemical.

Srila Prabhupada: So if you have to take shelter of LSD, then you are taking help from matter. So how are you free from matter?

Allen Ginsberg: Well, the subjective experience is, while in the state of intoxication of LSD you also realize that LSD is a material pill, and that it does not really matter.

Allen Ginsberg: Sound is the first element of creation?

Allen Ginsberg: What was the first sound traditionally?

Srila Prabhupada: Yes, it is nondifferent from Krishna.

Allen Ginsberg: Under all circumstances.

Srila Prabhupada: Yes, under all circumstances. But it is a question of my appreciation, or my realization. That will depend on my purity. Otherwise, this Krishna sound and Krishna are nondifferent. Therefore if we vibrate the sound Krishna, then we are immediately in contact with Krishna. And because Krishna is wholly spiritual, then we become spiritualized. Just like if you touch electricity, immediately you’re electrified. And the more you become electrified [by vibrating the sound Krishna], the more you become Krishna-ized. So when you are fully Krishna-ized, you are on the Krishna platform. Tyaktva deham punar janma naiti mam eti so ’rjuna. You don’t come back to this material existence. You remain with Krishna.