False Pride in a Foolish Age

This exchange between His Divine Grace A. C. Bhaktivedanta Swami Prabhupada and some of his disciples and guests took place during a morning walk in Hamburg in December 1969. 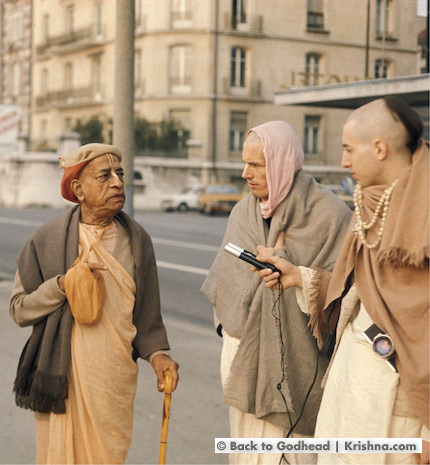 Srila Prabhupada: So last night at the lecture, our explanation of spiritual life was all right?

Disciple: Oh, yes, Srila Prabhupada. And there would have been even more people present but this is the week for the big world-championship football matches. So everyone tries to see those matches. Either they stay home and watch the matches on television, or they go out to the stadium. Everyone wants to see them.

And then in your next life, become a dog. That’s all. But people do not know. They simply say, “Never mind. I shall become a dog. After all, in my next life I will forget everything.”

In the universe there are so many planets, so many different standards of life. But people know nothing. They do not know anything.

Guest: But beings on the other planets may have forms more spiritual than ours.

Srila Prabhupada: No. They have material forms. For instance, although you cannot live within the water and only the fish can live within the water, still, a fish’s body is not spiritual. It is material. Likewise, you cannot go to the sun planet, because for you that is a foreign atmosphere. But there are living entities who live on the sun planet. They have got their suitable material body.

Guest: But I think for the people all this is difficult to understand.

Srila Prabhupada: They are trained up to be fools. How will they understand? They are simply fools, eating flesh and becoming like tigers and dogs. That’s all. A tiger may be very strong, but what kind of brain has he got? No brain.

Srila Prabhupada: So the modern civilization is making tigers – discovering the atomic bomb and teaching people how they can be physically strong and kill others. They are busy only in these things, the dog’s business – how to attack another dog. That’s all.

Guest: Your Divine Grace, this will be a very nice area here for your spiritual community.

Guest: And I think you will provide a very, very good example for the people around here.

Srila Prabhupada: But the so-called advanced human beings – they come here for hunting. They come here to shoot animals.

Srila Prabhupada: The animals are living peacefully in their own atmosphere, and these people come to kill them. This killing business has become very prominent at the present moment, and therefore so many humans are being killed in the very womb of their mother. Abortion – children killed. People do not know. Nature will not excuse you. You are killing; you’ll be killed within your mother’s womb. You’ll never see the light of the sun. You will go on being killed, life after life – as many lives as the number of animals you have killed. People do not know.

Nature’s law is that you grow your own food. But people are not interested in growing food. They are interested in manufacturing bolts and nuts. Factories. Big, big factories.

Just see what rascals they are! They think they can get unlimited quantities of butter, huh? – just as Krishna was stealing unlimited quantities of butter from His mother and throwing it to the monkeys. Butter can be produced by the Lord’s cows, so that everyone can eat sumptuously. But no. “Kill the animals, eat artificial butter, and vomit.” That’s all. Just see their intelligence. And they are proud of their advanced civilization.