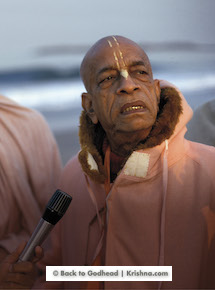 Disciple: Srila Prabhupada, some people will agree that a real civilization trains its citizens to find happiness in spiritual principles and godly living. Some may also agree that in a real civilization, one part of the populace learns the role of material providers. Yet these same people may disagree that still another part of the populace should learn the role of protectors and find happiness in fighting.

“What is so godly about fighting?” they may ask. “Why train the so-called militarily inclined to find happiness in fighting? This is a selfish type of happiness. You’re not considering that their fighting will cause misery. What about all the maimed and the killed and their families? You ought to consider all this misery caused by your so-called protectors.”

Srila Prabhupada: Some people may think in this way. But such people are rascals; they cannot think at all. We haven’t got to reply to any of them, because they are rascals. They can talk all nonsense. We don’t have to care about their nonsense. Take a child – he’s talking so many foolish things. Sometimes we reply, “Yes, yes, we know.” But we don’t take seriously anything – anything – spoken by a child. So these rascals may go on talking so many things, but we don’t care about any of them. We have to do our own business. Let the dog bark; the caravan will pass. So it is not that we have to care about the barking of the dogs. Let them bark.

Disciple [reading from Bhagavad-gita 16.6, 8]: “O son of Pritha, in this world there are two kinds of created beings. One is called divine and the other the demoniac. I have already explained to you at length the divine qualities. Now hear from Me of the demoniac.

“They say that this world is unreal, with no foundation, no God in control. They say it is produced of sex desire and has no cause other than lust.”

Purport, by Srila Prabhupada: “The demoniac conclude that the world is phantasmagoria. There is no cause and effect, no controller, no purpose: everything is unreal. They say that this cosmic manifestation arises due to chance material actions and reactions. They do not think that the world was created by God for a certain purpose. They have their own theory: that the world has come about in its own way and that there is no reason to believe that there is a God behind it. For them there is no difference between spirit and matter, and they do not accept the Supreme Spirit. Everything is matter only, and the whole cosmos is supposed to be a mass of ignorance. According to them, everything is void, and whatever manifestation exists is due to our ignorance in perception. They take it for granted that all manifestation of diversity is a display of ignorance. Just as in a dream we may create so many things which actually have no existence, so when we are awake we shall see that everything is simply a dream. But factually, although the demons say that life is a dream, they are very expert in enjoying this dream. And so, instead of acquiring knowledge, they become more and more implicated in their dreamland. They conclude that as a child is simply the result of sexual intercourse between a man and woman, this world is born without any soul. For them it is only a combination of matter that has produced the living entities, and there is no question of the existence of the soul. As many living creatures come out from perspiration and from a dead body without any cause, the whole living world has come out of the material combinations of the cosmic manifestation. Therefore material nature is the cause of this manifestation, and there is no other cause. They do not believe in the words of Krishna in Bhagavad-gita: mayadhyakshena prakritih suyate sa-characharam. ‘Under My direction the whole material world is moving.’ In other words, among the demons there is no perfect knowledge of the creation of the world; every one of them has some particular theory of his own. According to them, one interpretation of the scriptures is as good as another, for they do not believe in a standard understanding of the scriptural injunctions.”

Srila Prabhupada: This is the right description of the modern age. Exact – hm? Etam drishtim avashtabhya. And what is that next word?

“There is no God,” these modern rascals say. “There is no cause of this creation; there is simply a big chunk.” Like that. Nashtatmanah – they have lost their very self.

Nashtatmanah alpa-buddhayah: these soul-killing rascals have no intelligence. Just like cats and dogs. “If these four principles are available – eating, sleeping, mating, and defending – then everything’s complete. Our human life is a perfect success.” But no. If you are interested only in eating, sleeping, mating, and defending, then alpa-buddhayah – you are a stupid animal.