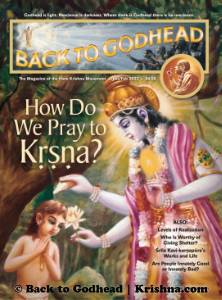 WELCOME  This issue corresponds with the annual festival of Gaura Purnima, which commemorates the divine appearance of Lord Krishna as Sri Chaitanya Mahaprabhu 536 years ago in Bengal. The Vedic scriptures speak of innumerable avatars of Krishna who have appeared throughout the millenniums, but Chaitanya Mahaprabhu is known as His most merciful avatar. In our cover story for this issue, Gauranga Darshana Dasa tells of “Ten Characteristics of Lord Chaitanya’s Mercy,” based on a prayer by Srila Svarupa Damodara Goswami, Lord Chaitanya’s personal secretary and intimate associate.

Purushottama Nitai Dasa writes about “Lord Chaitanya’s Civil Disobedience,” an act inspired by persecution of His insipient sankirtana movement. Mayapur-shashi’s article on the great devotee and philosopher Sri Jiva Goswami informs us about this most prolific author among Lord Chaitanya’s early followers.

Before His movement had reached beyond the borders of Bengal, Lord Chaitanya predicted that it would someday spread throughout the world. Satyaraja Dasa provides evidence that Srila Prabhupada was the empowered devotee who did the most to fulfill that prediction. And Chaitanya Charana Dasa gives insights into the poem Srila Prabhupada wrote at sea on his way to America to begin his momentous work on behalf of the Lord.

Some guidance in executing one of the nine processes of devotional service. By Vraja Vihari Dasa. Srimad-Bhagavatam presents prayers by ...
Read More

Lord Krishna excels everyone in everything, including service to others. By Vishakha Devi Dasi Lord Krishna makes promises, obliging Himself ...
Read More

An introduction to one of the greatest poets of the Gaudiya Vaishnava tradition. By Tattvavit Dasa Kavi-karnapura is revered by ...
Read More

Insights on Patanjali’s vrittis with help from the Gita and the Bhagavatam. By Sravaniya Devi Dasi A look at the ...
Read More

Primal Pronouns: Krishna, the First Person — and the Third One, Too

Why does Lord Krishna sometimes speak of Himself as “He” rather than “I”? By Satyaraja Dasa Curiously, when Krishna speaks ...
Read More

From different perspectives, the material world can be seen as a place of misery or of pure delight. By Mukundamala ...
Read More

Degrees Matter, But Only to Some Degree

Education and knowledge are often not the same thing. By Jitendra Savanur A perspective on modern education. Albert Einstein said, ...
Read More

Even the most independent-minded among us must sometimes seek help from others. By Gauranga Darshana Dasa A capable, merciful, and ...
Read More

“Does Krishna Not Love Her?”

A father prays to find clarity and hope in the face of his daughter’s disabilities. By Gaura Kumara Dasa Saddened ...
Read More

Srila Prabhupada explains that our Krishna consciousness will progress in stages if we follow the prescribed devotional practices. By His ...
Read More
Page load link
Go to Top