A Reason to Fight

The following conversation with a military officer took place in Indore, India, on December 13, 1970. 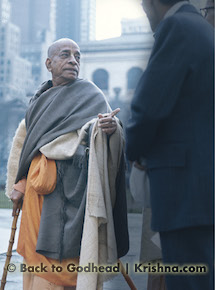 Guest: From what I have heard from you, I have not understood your conception of God.

Srila Prabhupada: Our conception of God is that He is a transcendental person. Ishvarah paramah krishna sac-cid-ananda vigrahah. Ishvara means Lord. The Supreme Lord is a person. As you are a person, He is also a person. But He is the chief person. Nityo nityanam. He is the leader, and we are the led. Or He is the master, and we are the servitors. That is our self-realization, to understand that “I am an eternal servant of God.” In Bhagavad-gita Krishna says, mamaivamsho jiva-loke jiva-bhutah sanatanah: “Eternally all living entities are My part and parcels.” So as the part and parcel of anything is meant to serve the cause of the whole, the only business of the living entity is to serve the Supreme. That is all.

Guest: One more thing, sir. Lord Krishna never asked Arjuna to sit and do bhajana [worship]. He said, uttishtha mam anusmara yuddhya: “Get up and fight.”

Srila Prabhupada: Yes, so fight with whom?

Guest: Whoever it is, but you must know who your enemies are.

Srila Prabhupada: That’s a nice proposal. Unless you know your enemy, how can you fight? We Vaishnavas do not say that there is no need of fighting. We never say that. When there is need of fighting, we must fight. Someone in New York – Mr. Goldsmith – asked me, “Why is Krishna advising Arjuna to fight, to become violent?” So someone may protest like that. But there is no meaning to protesting against the action of the Supreme Personality of Godhead. That is our view.

We are Vaishnavas, and we are chanting. But that does not mean that when there is need of fighting we shall lack in strength. We can fight. One gentleman told me, “Vaishnavism makes one dull. One cannot act.” But I said, “No, you have not seen a Vaishnava.” In the Mahabharata and the Ramayana the heroes were Arjuna and Hanuman, and they fought. 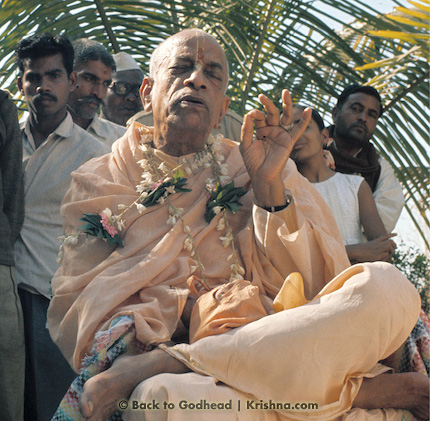 Srila Prabhupada: Yes. And who can be a better Vaishnava than them?

Srila Prabhupada: So being a Vaishnava does not mean one is dull. No.

Srila Prabhupada: Yes. So our present fighting is against atheism. Atheists say, “There is no God. God is dead. I am God. You are God.” We are fighting against these principles. Our fighting is very strong. Don’t think we are idle. I have come here to fight with the atheists.

We say, “God is Krishna. The Supreme Personality of Godhead is Krishna. He is a person, and He is not dead.” This is our preaching. Therefore it is a fight.

Srila Prabhupada: How can He be dead? How can you think that God is dead? That is foolishness.

Guest: If you think that God is dead, that is your own ignorance.

Srila Prabhupada: So we are fighting against this ignorance. And at the present moment so many [false] theories and religious principles have sprung up unnecessarily. You see? But we are sticking to the principle that the only religion is to surrender unto the Supreme Personality of Godhead. That is real religion: surrender.

Guest: On the first day of this inauguration [of a program in Indore], the speakers were giving some definitions of karma-yoga.

Guest: I don’t know where India is going to, where the land of Krishna is going.

Srila Prabhupada: Well, we should try our best.

Guest: Yes, we have to fight these habits. It is our duty.

Srila Prabhupada: Yes, that’s it. So you are a military man. I request you to fight against this nonsense.