This conversation between His Divine Grace A. C. Bhaktivedanta Swami Prabhupada and some of his disciples took place in New Vrindaban. West Virginia, on June 26, 1976. 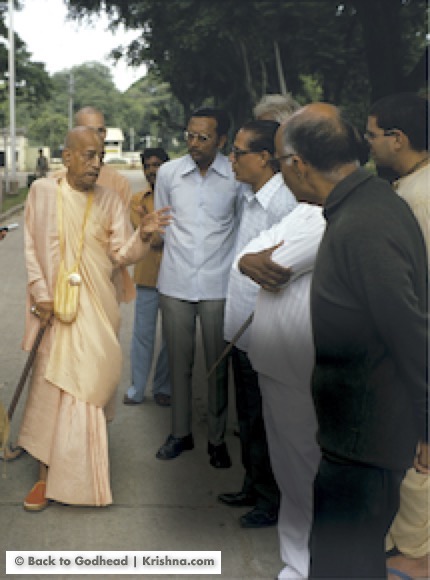 Srila Prabhupada: I’ve seen in New York that in some quarters it is so nasty. Disaster. So many storefronts and houses lying vacant. Just after my arrival there, I would sometimes walk to see various parts of the city. Hellish condition. People said it was risky, but [laughing] I did not know that it was risky.

One electrician who was my friend said, “Oh, Swamiji, you are going to that quarter? It is not for you. Don’t.”

“Oh, I do not care. What have I got that they could take from me?”

So I was going here and there in New York City. So many nasty quarters. London, also. So many houses vacant.

Disciple: Srila Prabhupada, some say there is more chance of being killed in New York City than in the jungle. Violent criminals are roaming the neighborhoods to rob and rape, because they know that very often modern society isn’t going to do much to stop them. These thugs can literally get away with murder.

Srila Prabhupada: Yes. People warned me not to go to Central Park in the evening. They said at night nobody goes there.

Disciple: That’s quite true, Srila Prabhupada. At night ordinary people are afraid to go there. They have to stay inside, behind locked doors. Nobody can go to the park. Except the muggers and killers. They practically own the place.

Disciple: Srila Prabhupada, it seems people are realizing how bad this modern civilization is. But is there anything this civilization has done that’s good – even if just by accident? People are hoping against hope. because their civilization is so bad. 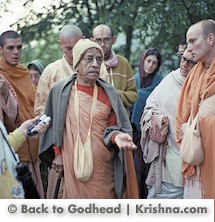 But accidentally, good sometimes comes. Accidentally, this Krishna consciousness movement came here [laughing], although it was already going on in India. Nobody here called for Krishna consciousness – the scientists, the politicians. But as if by accident it came. As if by accident they got this benefit. They cannot explain the workings of God; therefore they take everything as an accident.

Disciple [reading from Bhagavad-gita As It Is 16.9]: “The demoniac are engaged in activities that will lead the world to destruction. The Lord states here that they are less intelligent. The materialists, who have no concept of God, think that they are advancing. But according to Bhagavad-gita, they are unintelligent and devoid of all sense. They try to enjoy this material world to the utmost limit and therefore always engage in inventing something for sense gratification. Such materialistic inventions are considered to be advancement of human civilization, but the result is that people grow more and more violent and more and more cruel – cruel to animals and cruel to other human beings. They have no idea how to behave toward one another. Animal killing is very prominent amongst demoniac people. Such people are considered the enemies of the world, because ultimately they will invent or create something which will bring destruction to all. Indirectly, this verse anticipates the invention of nuclear weapons, of which the whole world is today very proud. At any moment war may take place, and these atomic weapons may create havoc. Such things are created solely for the destruction of the world, and this is indicated here. Due to godlessness, such weapons are invented in human society; they are not meant for the peace and prosperity of the world.”

Disciple: If we look back over this century, Srila Prabhupada, we can’t find many years of peace. The Russo-Japanese War, the First World War, the Second World War. the Korean War, the Vietnam War, and hundreds of what they call “low-intensity conflicts.” But always some kind of war going on. Whether in the Middle East or Latin America or Africa, people are always fighting over land and industrial resources. It seems some kind of war always has to be going on.

Srila Prabhupada: Yes, always some war. “Cold war” or “hot war,” as they say. When there is the fire of physical combat that is a hot war. And when there are diplomacy and politics that is a cold war. So war is going on. Sometimes it is hot; sometimes it is cold. There is no peace.

Disciple: And what’s more, Srila Prabhupada, we even see that among the so-called God conscious communities, still there are such horrible activities going on. Fighting.

Srila Prabhupada: No, no. We don’t say that all fighting has to stop. We are drawing a distinction between fighting by demons and fighting by demigods. If you are a demon and you come to attack me. then I must defend myself. What can I do?

If you start a war, you are a demon. Shall I decline from fighting you? “No, no. I am a demigod – I shall not fight. You can kill me.” Is that intelligent? I’ll have to fight.

But war starts by the instigation of the demoniac. The Kurukshetra war – it was not started by Arjuna. It was started by Duryodhana.