“People Have No Idea About Liberation” 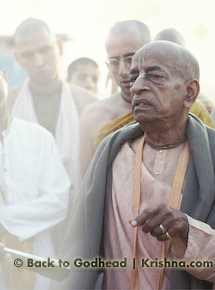 Disciple [reading from Bhagavad-gita As It Is, 16.1]: “The Supreme Personality of Godhead said: ‘Fearlessness; purification of one’s existence: cultivation of spiritual knowledge; charity; self-control; performance of sacrifice; study of the Vedas; austerity; simplicity; nonviolence; truthfulness; freedom from anger; renunciation; tranquility; aversion to faultfinding; compassion for all living entities; freedom from covetousness; gentleness; modesty; steady determination; vigor; forgiveness; fortitude; cleanliness; and freedom from envy and from the passion for honor – these transcendental qualities, O son of Bharata, belong to godly men endowed with divine nature.’”

Purport, by Srila Prabhupada: “In the beginning of the Fifteenth Chapter, the banyan tree of this material world was explained. The extra roots coming out of it were compared to the activities of the living entities, some auspicious, some inauspicious. In the Ninth Chapter, also, the devas, or godly, and the asuras, the ungodly, or demons, were explained. Now, according to the Vedic rites, activities in the mode of goodness are considered auspicious for progress on the path of liberation. . . .”

So in this modern civilization, people cannot even realize that there is a next life and we can go to other planets, such as the moon. Sarva-ga: the living entity has the tendency to travel widely, to many situations. Artificially people are trying, but they do not know the proper method. As Krishna says in Bhagavad-gita (9.25),

People do not know this. Although they have got the tendency to go to higher planets, they do not know how to go. They do not know positively what are the positions of the various material planets or Vaikunthaloka, the spiritual planets. They do not know about liberation or the next life, transmigration – nothing of the sort. Simply like dogs.

Now, consider this point – whether I’m speaking rightly or wrongly. I know I am speaking the right thing, but if you disagree, then you can discuss it amongst yourselves.

Disciple: Srila Prabhupada, many people think that “liberation” has nothing to do with spiritual realization. It just means you can do anything you like – free from any consequences.

Disciple: The Christian conception of salvation is based not so much on attraction for the transcendental reality as on fear of hell.

Srila Prabhupada: This may be the official Christian conception, but the mass of people are not even afraid of hell. They do not even know what hell is – because they are living in hell already.

You remember the humorous story. When a miner in Sheffield, England, heard some preacher’s description of hell, he remained undisturbed.

When the miner was informed that in hell there is no newspaper, only then did he become disturbed.

“Horrible! How can anyone live without a newspaper?”

“Even if I go to hell, I will get a good salary, that’s all. Money is required. Then I can drink nicely.”

But the transcendental reality is here also. Krishna’s standard is here. But this transcendental qualification, abhayam sattva-samshuddhih, fearlessness and purification of one’s existence – “What is that?” It does not appeal to people. It does not strike them at all. And yet in the Lord’s estimation, these qualities are the high qualities.

“Fearlessness and purification of one’s existence” the Lord requires of us. But who is fearless? Everyone is fearful. Fearlessness is a godly quality, but today who understands it? Ahara-nidra-bhaya-maithunam ca: rather, all that people understand is eating, sleeping, mating, and defending, or fearing. This is animal life. To eat, to sleep, to have sex, and to become fearful – this is animal life. And so Krishna says one has to become fearless. But who cares about it? People are thinking that to become fearless means to keep a gun. Of course, that is also one way. [Laughter.]

And as for purification of one’s existence, here also people do not know anything. When someone falls sick he wants to go to a doctor and become purified. But his whole life is impure – that he doesn’t know. You see, because people’s very existence is impure, they are subjected to birth, death, old age, and disease. That they do not know.