The great sage Parashara, the father of Vyasadeva, listed six essential qualities of God. Srila Prabhupada shows that Krishna has them all.

By His Divine Grace A. C. Bhaktivedanta Swami Prabhupada, lecture given in Los Angeles on May 18, 1972

Lord Krishna meets the definition of God given in the Vedic literature, and He can teach us everything about the nature of reality. 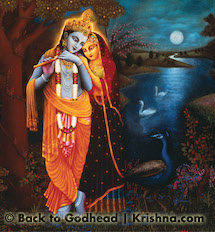 Ladies and gentlemen, I thank you very much for your kindly participating in this Krishna consciousness movement. When this society was registered in 1966 in New York, some friend suggested that the society may be named “God consciousness.” They thought that “Krishna” is a Hindu god’s name. In the English dictionary also, this is said. But actually if any name can be fixed up for God it is “Krishna.” 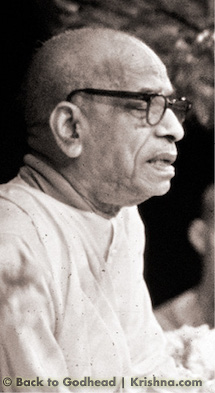 Parashara Muni, a great sage – the father of Vyasadeva, who compiled all the Vedic literatures – gave a definition of God:

“Full wealth, strength, fame, beauty, knowledge, and renunciation – these are the six opulences of the Supreme Personality of Godhead.” (Vishnu Purana 6.5.47) By these six opulences one can ascertain what is God.

First, He’s the proprietor of all riches. Here we have got experience that one may be a very rich man, but nobody can say that he is the richest, that there is no man richer than him. Nobody can say that. But Krishna, when He was present, as we have described in our book Krishna, had 16,108 wives. And each wife had a big palace made of marble and bedecked with jewels. The furniture was made of ivory and gold. The descriptions are there. In the history of the human society you cannot find any person who had 16,000 wives and 16,000 palaces.

Not only that, it is not that He used to go to one wife’s house one day or one night and to another’s house the next day or night. No. He was personally present in every house. That means He expanded Himself into 16,108 forms. That is not very difficult for Him. If God is unlimited, then He can expand Himself into unlimited forms; otherwise there is no meaning of unlimited. If God is omnipotent, He can maintain 16,000 wives. Why 16,000? If He maintains 16,000,000, still it is imperfect. Otherwise there is no meaning of omnipotence.

These are the attractive features of God. Here, in this material world, if a man is very rich he is attractive. In your country there are rich men – Rockefeller, Ford. They are very attractive on account of their wealth. They do not possess all the wealth of the world; still they are attractive. So how attractive will God be, because He’s the possessor of all the wealth?

Similarly viryasya, strength. When Krishna was present, from the beginning of His life He had to fight. When He was only three months old, He was lying down on the lap of His mother, and a demon named Putana arrived there. She wanted to kill Krishna, but He killed her. That is God. God is God from the very beginning. Not that by some meditation, by mystic power, one becomes God. Krishna was not that type of God. Krishna was God from the very beginning of His appearance.

Then yashasah, reputation. His fame, reputation, is still going on. We are devotees of Krishna, so we may glorify Him. But apart from us, still many millions of people in this world know how reputed and famous Krishna is through His Bhagavad-gita. In all countries, all over the world, Bhagavad-gita is read by philosophers, scholars, religionists.

And shriyah, beauty. Krishna is Himself very beautiful, and all His associates are very beautiful. That is also an opulence. In this material world those who are pious – whose past background is pious life – get opportunities such as birth in a good family, in a good nation. Therefore I say so many times that you American people, your birth in a rich nation, your beauty, these are the result of your past pious activities. You are attractive, the American nation, all over the world. Why? Due to this. You are advanced in scientific knowledge. You are advanced in riches. You are advanced in beauty. So these are the opulences.

Then jnana, knowledge. If a man is perfectly advanced in knowledge, he’s attractive. Some scientist, some philosopher, because he gives nice knowledge is attractive. And Krishna’s knowledge is described in Srimad-Bhagavatam and Bhagavad-gita. You can study these books. You are studying. Now we are presenting sublime knowledge in English translation. There is no comparison in the world.

Vairagya means renouncement. Practically, Krishna is not here within this material world. For example, a big man has his factory going on, his business is going on, but it is not necessary that he be present there. Similarly, Krishna’s potency is working. His assistants, His numerous demigods, are working. They’re described in the shastra, the scripture.

So if any name can be given to God, it is the name Krishna. It is admitted in the Vedic literature that God has got many names, but this Krishna name is the chief name. And it is very nicely explained as meaning “all-attractive.” In so many ways He’s all-attractive.

Spirit and Its Reflection

The Krishna consciousness movement is propagating God’s name, God’s glory, God’s activities, God’s beauty, God’s love. Everything. We have got many things within this material world, and all of them are in Krishna. The most prominent feature in this material world is sex attraction. So that is there in Krishna. We are worshiping Radha and Krishna. There is attraction between Them. But that attraction and the attraction in the material world are not the same. That is real, and this is unreal. We are also dealing with everything present in the spiritual world, but here it is only a reflection. It has no real value.

In the tailor’s shop, sometimes there are many beautiful dolls – a beautiful girl is standing. But nobody cares to see it, because everyone knows that it is false. However beautiful it may be, it is false. But a living woman, if she is beautiful, so many people want to see her. Because that is real.

This is only an example, because here the so-called living is also dead. The body is matter. It is a lump of matter. As soon as the soul goes away from the same beautiful woman, nobody cares to see it, because it is as good as the doll in the window of the tailor shop. The real factor is the spirit soul, and because here everything is made of dead matter, it is simply imitation, reflection.

We cannot calculate even the length and breadth of this material world, what to speak of the spiritual world. Therefore we have to know from authoritative sources. The most authoritative source is Krishna. We have already described that nobody is wiser or more knowledgeable than Krishna. Krishna gives the knowledge “Beyond this material world there is another world, the spiritual sky.” (Gita 8.20) In the spiritual sky there are innumerable planets. And that sky is far, far greater than this sky. This sky is one fourth only, and the spiritual sky is three fourths. That is described in the Bhagavad-gita (10.42), ekamshena sthito jagat.

If I say, “I don’t care for the government,” then what will happen? I’ll be arrested. I’ll be punished. Similarly, living entities are originally part and parcel of God, like sons. The Christian people also understand that God is the supreme father and we are all His sons. They go to church and pray, “God, Father, give us our daily bread.” That is the conception in the Bhagavad-gita also. Krishna says, “I am the father of all living entities.”

Those who are a little attracted are engaged in philanthropic work – to give help to the poor or to open a school or a hospital. This is called karma-kanda. Out of many millions of these karma-kanda people, one is a jnani. Jnani means “one who knows.” Out of millions of persons who know, one is liberated. And out of millions of liberated persons, one can understand what is Krishna. This is the position of Krishna.

“Out of many thousands among men, one may endeavor for perfection, and of those who have achieved perfection, hardly one knows Me in truth.” (Gita 7.3)

That is the only process to understand God. Otherwise, by speculation we cannot understand God. It is not possible. He is unlimited, and we are limited. Our knowledge, our perception, all of these are very limited. So how can we understand the unlimited? But if we accept the version of the unlimited – “I am like this, like that” – then we can understand. That is perfect knowledge.

This Krishna consciousness movement is for giving perfect knowledge to the human society: what you are, what is God, what is this material world, why you have come here, why you have to undergo so much tribulation in the miserable condition of life, why you die.

A man sleeps; a dog sleeps. Because a man sleeps in a very nice apartment, that does not mean he’s more advanced than the dog. The business is sleeping, that’s all. Man has discovered atomic weapons for defending, and the dog has his nails and teeth; it can also defend itself. So defending is there for both man and animal. You cannot say, “Because I have got this atomic bomb, therefore I can conquer the whole world or the whole universe.” That is not possible. You can defend in your own way, and the dog can also defend in his own way.

Real advancement means to know God. That is advancement. There are so many rascals denying the existence of God. That is very nice in their minds, because if there is no God then they can go on with their sinful activities unrestrictedly: “There is no God. Very nice.” But simply by your denying God, God will not die. God is there. God is there, and His administration is there. By His order the sun is rising, the moon is rising, the water is flowing. The ocean is abiding by His order.

Everything is under His order. Everything is going on nicely, without any change. How can you say God is dead? If there is some mismanagement, you can say there is no government, but if there is nice management, how you can say there is no government? So God is there. You do not know God. Therefore some of you say, “God is dead,” “There is no God,” “God has no form,” “God is zero” – so many things. But no. We are firmly convinced that there is God and Krishna is God, and we are worshiping Him. That is the Krishna consciousness movement. Try to understand it.