Some guidance in executing one of the nine processes of devotional service.

Srimad-Bhagavatam presents prayers by great devotees of the Lord that can guide us in our own life of prayer.

“Therefore, although I was born in a demoniac family, I may without a doubt offer prayers to the Lord with full endeavor, as far as my intelligence allows. Anyone who has been forced by ignorance to enter the material world may be purified of material life if he offers prayers to the Lord and hears the Lord’s glories.” (Sri Prahlada to Lord Narasimhadeva, Srimad-Bhagavatam, 7.9.12) 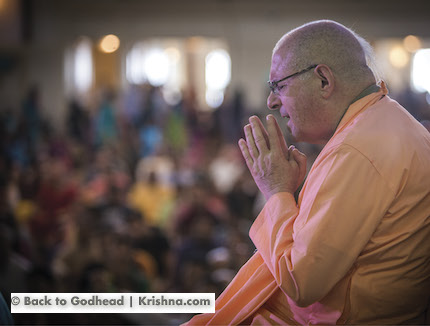 I couldn’t grapple with the shocking news. “Cancer has spread fast; he has only a few more days in this body,” the doctor revealed to us. Our friend Stoka Krishna Dasa was thirty-four years old, and his wife had just delivered a baby girl.

“This isn’t fair,” my mind protested. “He has just begun a new life.”

As emotions of shock me and sadness churned in my heart, I gathered the strength to visit Stoka Krishna. What could I tell him to comfort his heart? I was clueless.

To my pleasant surprise, however, he was at ease. Amongst the many things he spoke to me that evening fifteen years ago, his realization of prayer still rings loud in my heart.

“If we can’t thank God for all the gifts He gives us when we are healthy, we’ll fail to remember Him when He starts taking it all away.”

We receive abundant blessings in our lives. Our health, finances, and family, besides many daily experiences, are God’s benedictions on us. However, one day it’s all going to end; everything we hold dear in our lives will be taken away from us. And our spiritual success depends on how grateful we are as we leave this body and enter the afterlife. But it is extremely difficult to practice gratitude when things we are attached to are snatched away from us, especially if we haven’t thanked God when we received them in the first place.

Therefore scriptures teach us gratitude and appreciation as the essential elements of prayer. And prayer is a daily practice of sincere bhakti-yogis.

Often we mistake prayer to mean asking benedictions from God. But Srimad-Bhagavatam reveals that before we ask God to give us what we want, we would do well to examine other components of prayer. A devotee of Krishna learns to pray by studying the prayers of stalwart devotees.

Queen Kunti’s prayers in the First Canto of Srimad-Bhagavatam teach us to first praise the Lord, then express our own disqualifications, then thank Him for all He has given us, and finally request Him for the blessings we seek.

When Kunti, the mother of the five Pandavas, saw that Krishna was leaving them to return to His home in Dwarka, she was distraught. Krishna had protected her sons during the fratricidal Mahabharata war and at other times. She wished that Krishna would stay with them, and in a desperate attempt to stop him from leaving Hastinapura, she offered her heartfelt prayers. But the first thing she did was not to ask Krishna to stay; instead, she glorified Krishna’s amazing power of independence, which He exhibits by remaining invisible to all living entities although He’s present in the hearts of all. Kunti reveals that Krishna is like an expert actor who is unrecognizable to the ignorant. She then presents her disqualification to know Krishna. She says that she is a simple woman and only highly realized sages can know Him. Srila Prabhupada writes in the purport to this verse that Krishna knows one’s sincerity of purpose and one’s simplicity in accepting the Lord’s authority, as exhibited by Kunti, and that these qualities are more effective than showy, insincere religious fervor.

Kunti Devi thanks Krishna for all the help He provided her family. Often we express thanks to God for everything He has done for us, and this is usually said in a general sense. Kunti, however, explains in specific details how Krishna protected her and her sons from many dangers. She thus teaches that gratitude is shown more by a specific delineation of the Lord’s blessings upon us than by a general expression of gratitude. Remembrance of God’s specific kindness upon us helps us connect to His love on a deeper level.

Towards the end of her prayers, Kunti Devi asks Krishna to break all of her material bonds and allow her to fix her mind exclusively on Him. She wants no distraction on the path of devotional service to the Lord.

Prahlada displayed the same mood as Kunti Devi. When the Lord asked him to accept a benediction, he plainly refused, saying he was not interested in a business relationship with God. He wanted to serve the Lord for His pleasure, and not for anything in return. Upon the Lord’s insistence, Prahlada finally accepted a blessing, but not for himself; he asked that his father be pardoned and granted liberation.

The Sixth Canto of Srimad-Bhagavatam reveals the prayers of Vritrasura. He emphatically declares that he doesn’t want an unrivalled kingdom or yogic powers. He desires neither liberation from the cycle of birth and death nor opulence greater than that of the heavenly abodes. He simply seeks to be united with God through loving service.

Pure devotees of Krishna refuse to take material gifts from Him because they know that all blessings in the material world are temporary and pregnant with suffering. This world guarantees repeated misery and impediments as we seek enjoyment.

Misery can be defined as getting what you don’t want and not getting what you want. Srimad-Bhagavatam, in many instances, reveals this nature of the material world. For example, Maharaja Anga was unhappy because his son, Vena, was cruel. Even as a child, Vena would kill his friends during casual play. Anga was so fed up in his failed attempt to reform his son that he renounced his kingdom. In stark contrast, Hiranyakashipu was blessed with a saintly son, Prahlada, yet he lamented that his son wasn’t an expert demon. How happy he and Anga would have been if they could exchange places! And we hear of King Chitraketu, who despite having many wives was miserable because none of them could bear him a son. Each one of these persons described in the Bhagavatam suffered by not getting what they wanted.

Therefore Srila Prabhupada gave us the best benediction to ask from God – the opportunity to serve Him selflessly. Dhruva had desired a kingdom greater than that of his grandfather, Brahma, and he was determined to get great material wealth. Yet when the Lord appeared before him, he regretted cultivating these desires. He candidly told the Lord that by gaining an audience with Him, he was now getting a precious diamond although he had all the while been seeking only broken pieces of glass.

But I Am Not a Pure Devotee; I Have Material Desires!

Like Dhruva, we can begin our devotional prayers from the platform of honesty. If we have material desires, rather than artificially denying them, we can pray to God for the purification of our heart. And if the Lord desires, He will fulfill our wish.

As a new apprentice in the temple ashram, I desired to secure the first rank in our monthly Bhagavad-gita exams. I knew this was a silly desire to cultivate, given the fact that the brahmacharis in the ashram had left all material pursuits simply to serve the Lord and His devotees. To compete with them, that too on a trivial exam, didn’t behoove me. I knew it wasn’t right. Still, my academic and competitive background urged me to compete with them. Unable to resolve this inner conflict, I approached my mentor in the ashram for guidance. His words of wisdom have guided me ever since. He said it’s better we honestly confess to God our desire, such as my desire to come first in the exams. However, he added, we can include a small petition at the end. We can tell Krishna, “O Krishna, I am so foolish that I seek to come first in these exams, and I really want this desire fulfilled. But, O Krishna, please give me intelligence so that next time when I come in front of You, I request blessings that will be in my best interest. Let me seek benedictions that will help me come closer to You. Let me ask for things that will help me serve Your sincere devotees.”

A prayer like this helps us authentically seek our desires, and yet we express our sincerity to seek something higher.

How Can We Grow in Our Prayers?

Aryaman was twelve years old when I saw him rush for his exams with his deity of Lord Jagannatha in one hand and his pen box in the other. I asked him why he was taking the Lord for his school tests. He said he always carried his Lord with him. As soon as the examiner hands out the question paper, Aryaman first shows the paper to his deity, who sits on the table, watching His devotee write the exam. After he has finished answering the tests, he again shows his answer paper to the Lord and then submits it to the exam monitor. This is a simple way he devised to become God conscious and evolve in his prayerful relationship with Krishna. His parents have helped him creatively remember Krishna in his own unique way.

The essence of all the rules and regulations we practice in Krishna consciousness is to always remember Krishna and never forget Him. We can accept whatever works best to help us remember the Lord. Unlike Aryaman, for you it could be singing bhajanas or dressing the deities or chanting the holy names or hearing Srimad-Bhagavatam classes. Whatever works. Somehow or the other we need to fix our minds on Krishna.

Gratitude in daily life is yet another practical way to improve our prayers. If you are thirsty and someone offers you a cup of water, you’ll most likely say thank you. But isn’t God supplying unlimited water, air, heat, sunshine, etc., daily? Awareness of the daily gifts, especially what we have received in the last twenty-four hours, is an excellent way to keep our gratitude practices fresh and exciting.

A question now stares me in the face: While Stoka Krishna Dasa could see God’s love even in his cancer, can I see Krishna’s love in my good health? It’s time I celebrate God’s daily gifts with gratitude, for one day soon I’ll have to thank Him for a life that quickly passed and filled me with abundant blessings. But did I even realize I received so many blessings?

Vraja Vihari Dasa, a disciple of His Holiness Radhanath Swami, has served full time at ISKCON Chowpatty since 1999. He has an honors degree in economics and a master’s in international finance. He teaches Krishna consciousness to youth and the congregation and has written four books. You can read his daily reflections at www.yogaformodernage.com.